Can you help find this Irish woman, a crack World War I codebreaker?

Catherine Hayes Osborne from Co. Donegal was one of the first six members of a team employed by the British Army to crack German WWI codes. 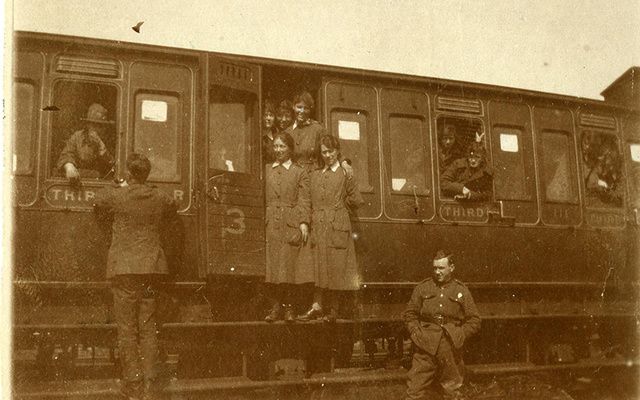 The Donegal County Museum has launched an appeal to find an Irish woman with an amazing World War I story. Catherine Hayes Osborne, from Milford in Co. Donegal, was a member of one of the first ever military codebreaking teams. Unfortunately, the records of her deeds were lost in World War II  bombings, and, so, not much is known of what happened to this extraordinary Irish woman.

The Donegal Museum is now hoping to track down the codebreaker’s relatives and discover more about what became of Osborne after her WWI exploits as one of the first six codebreakers in the British Army. With the other members of the team, she worked at intercepting, deconstructing, and translating German wireless intelligence during World War I, an important role.

Having worked in the Censor’s Office, which was attached to the Intelligence branch of the British Army’s General Staff, Osborne went on to work as a member of the British Women's Army Auxiliary Corps (WAAC). She was as an Assistant Administrator (2nd Lieutenant).

While her story is relatively unknown and there are only scant details of her life before she became a codebreaker, it is on record that she arrived in France on September 28, 1917.

“She became a ‘Hush WAAC,’ a nickname given to the dozen servicewomen at St Omer, France, who decoded German wireless messages during the First World War,” museum spokesperson Caroline Carr told the Irish Post.

“These women were highly educated and they would have been excellent linguists.

“Many of the German messages were routine requests for war material but others supplied vital information about troop movements.

“The work was secret hence the nickname ‘Hush WAAC.’”

Clothing is issued by the Women's Army Auxiliary Corps from a Nissen hut damaged by an air raid at Abbeville, France, on 22 May 1918. Image: WikiCommons.

The women were all fluent German speakers and were some of the few officials who replaced army officers in St. Omer. They were completely unaware of what their role would be when they were first sent to France and equally unaware of the long hours they would be forced to spend at work.

It wasn’t until their first day there that they discovered exactly what their task would be and that they would be receiving just one half-day off a week once they stopped working at 4 pm. By May 1918, some months later, this increased to a full day off a week.

“We had a good send-off … as we had attained a certain amount of dignity and prestige from the fact that we were going out to do some mysterious work, the nature of which we know no more than anybody else,” wrote one of the codebreakers, Mabel Peel, in her memoir.

“I think none of us will forget that first morning in the office … We were told that they were codes, wireless messages (coming from the Germans and tapped by our operators) … Never having seen a coded message in our lives before, you can imagine the despair that filled our hearts,” she continued.

“We began to find our work intensely interesting, and as we began to see more and more daylight in it, found it monopolising all our thoughts, both waking and sleeping … I know that at the end of three months, a colleague and myself decoded our daily messages by ourselves, handing up our suggestions each evening to be signed by the head of the room.”

There are few primary accounts of the women’s lives in the camp and the messages they decoded but it is known that they slept in a separate part of the camp and had their own staff. They were shifted to Le Touquet in April 1918 after St Omer was bombed. There the women remained until the Armistice.

Read more: “The bravest man I ever met” Father Brown in World War I

Slightly more is known about Osborne's life before the war, including information on other members of her family whose descendants may be able to lead to the full-life story of the Irish code-breaking extraordinaire.

Catherine Hayes Osborne was the youngest daughter of Dr. John Allen Osborne and Catherine Hay. She also had a sister Jane, who worked as a general housekeeper at Sheffield’s Great Northern General Hospital between 1916 and 1918, and a brother John Allan Osborne who became a country solicitor back in Donegal.

Her father worked as a doctor for the Milford Poor Law. He and Catherine's mother Catherine Hay were married in the Ballymacarrett Presbyterian Church in Belfast by the Rev John Meneely.

If anyone has any additional information, memoirs, photographs or are relatives of the family, please contact Caroline Carr at Donegal County Museum, High Road, Letterkenny, Co. Donegal.