Ministering to soldiers in the thick of the action, the Titanic priest Father Francis Browne was wounded five times and badly gassed. 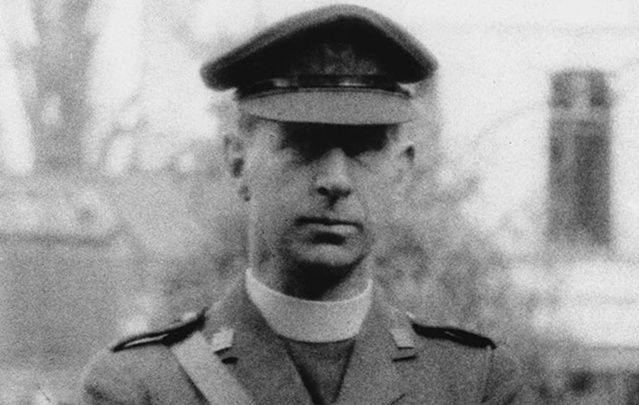 Father Browne: Ministering to soldiers in the thick of the action, Titanic priest was wounded five times and badly gassed.

Field Marshal Douglas Haig, head of the British forces on the 'western front' during WWI, described Father Francis Browne as “the bravest man I ever met." Not many people know that "Father Browne of The Titanic" went on to serve with great distinction during the First World War.

In 1916 he joined the British Army as a Jesuit chaplain. He served for most of the war with the Irish Guards at the front in the trenches and on the battlefields of Flanders.

Ministering to soldiers in the thick of the action, Father Browne was wounded five times and badly gassed. “Father Browne's First World War” gives an account of his wartime experiences and contains 100 photos from his remarkable collection. There are also extracts from his letters home describing his experiences, and from his messages to the families of the fallen. The book includes a moving account of the time he spent working alongside fellow chaplain, Fr Willie Doyle, killed by a shell.

In recognition of his bravery, Fr Browne was awarded the Military Cross and the French and Belgian Croix de Guerre.

Father Eddie O'Donnell has written a fascinating and moving account of Father Browne's war, brought vividly to life with extracts from his letters, and illustrated throughout with photographs taken by Father Browne.

Read more: Did the Irish priest on board the Titanic take a “selfie”?