Jesuit priest Fr. William Doyle was killed in August 1917 while going to the aid of his comrades. 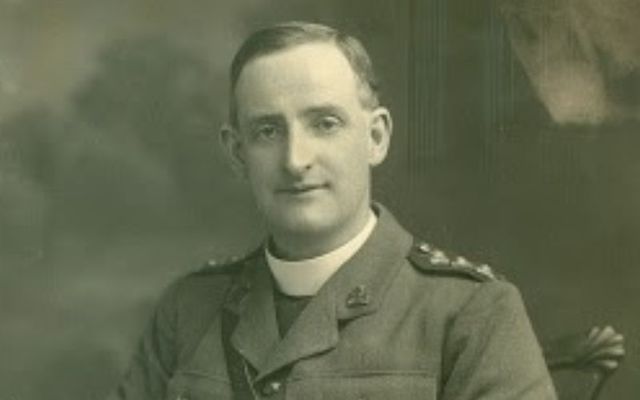 The Catholic Church has initiated a cause for Irish priest and World War I hero Father William Doyle to be canonized.

The Jesuit priest was born in the Dublin suburb of Dalkey in 1873 and entered the Jesuit novitiate in Tullabeg, Rahan, in the diocese of Meath shortly after turning 18.

In November 1915, one year after the outbreak of the First World War, Fr. Doyle was appointed chaplain to the 8th Battalion of the Royal Irish Fusiliers and was present at some of the most infamous battles of the war, including the Battle of the Somme and the Battle of Messines Ridge.

Despite having the rank of Captain, Fr. Doyle "lived and suffered alongside his men" in the trenches, once lying flat on his stomach so that a sick doctor could lie on his back rather than the cold damp ground.

Fr. Doyle was killed during the Battle of Passchendaele in August 17 while running to assist a group of soldiers who had gotten into trouble at the front line. His body was never recovered.

In a homily at the Cathedral of Christ the King in Mullingar on Sunday evening, Bishop of Meath Tom Deenihan said Fr. Doyle's following was "strong and widespread".

Doyle's father's house was burgled after the Jesuit priest had been killed in battle.

The burglar spotted a picture of Fr. Doyle as he went about the robbery and asked Doyle's father, who was in the house at the time, who the man in the photograph was.

Doyle's father told the burglar that it was a photograph of his son, who lost his life in the First World War as an Army Chaplain.

The man responded that Fr. Doyle was his chaplain while he was serving during the First World War, adding that the Jesuit priest was a good man.

He subsequently dropped his bag of stolen goods and left the house empty-handed.

Bishop Deenihan asked the congregation gathered in Mullingar if this could have been Fr. Doyle's first miracle.

For an individual to be beatified, it is required that a miracle is attributed to prayers made to the individual after death.

For canonization, which is the final step in declaring someone a saint, a second miracle normally needs to be attributed to the individual after they have been beatified.

The miracles are seen as proof that the individual is in heaven and already able to intervene with God on others' behalf.

Bishop Deenihan said on Sunday that he hopes Fr. Doyle will soon "be counted among those whom we publicly venerate and implore".

The Father Willie Doyle Association has welcomed the opening of the canonization process.

On its 102nd anniversary: Michael Collins and the Bloody Sunday massacre