“We are deeply disturbed by your government’s unwillingness to stop the abuse," Sanders wrote. 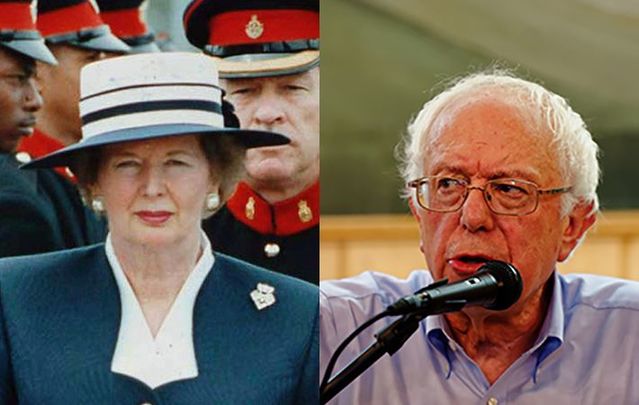 “We are deeply disturbed by your government’s unwillingness to stop the abuse, humiliation and degrading treatment of Irish prisoners now on hunger strikes in Northern Ireland,” Sanders wrote. WikiCommons

Bernie Sanders has just announced he is running in 2020 but did you know he once took an interest in Irish politics?

In a letter dating from 1981, Democratic presidential hopeful Bernie Sanders calls on then-British Prime Minister Margaret Thatcher to end the “humiliation and degrading treatment” of Irish prisoners on hunger strike in Northern Ireland.

It has previously been claimed that foreign policy is lacking in Sanders’ experience, newly revealed documents from a University of Vermont archive suggest Sanders showed an early interest in the Irish question, especially in the treatment of IRA prisoners in Long Kesh Prison, during the early 1980s.

Then a newly elected mayor in the City of Burlington in Vermont, Sanders wrote to the British Prime Minister in July 1981, condemning the treatment of the H-Block prisoners who began their second hunger strike that year in protest to the withdrawal of their status as political prisoners, reports the Telegraph.

The correspondence came just days after a civil rights activist from Belfast city council addressed Burlington aldermen - a talk that was strongly supported by Jane O’Meara Driscoll, Sanders' future wife - and two months after the death of the most prominent of the hunger strikers, Bobby Sands.

“We are deeply disturbed by your government’s unwillingness to stop the abuse, humiliation and degrading treatment of Irish prisoners now on hunger strikes in Northern Ireland,” Sanders wrote in a letter sent on July 15, 1981.

“We ask you to end your intransigent policy towards the prisoners before the reputation of the English people for fair play and simple decency is further damaged in the eyes of the people of Vermont and the United States.”

The letter was cosigned by Terry Bouricius, a Burlington alderman.

The 1981 H-block hunger strikes were a culmination of the effort to reinstate the status of paramilitary prisoners in the Maze prison as political prisoners, a status that had been revoked in July 1976 as part of the British government’s policy of “criminalization” for convicted paramilitaries.

Beginning with a blanket protest (refusing to wear prison uniforms) and with a dirty protest, the campaign escalated into a hunger strike first in 1980, as seven men refused to eat, honoring the seven signatories of the 1916 Easter Rising.

The second strike began in January 1981 when it became clear the British government would not meet the demands they had agreed to at the end of the first strike. The second strike resulted in a standoff between the strikers and Thatcher who refused to be swayed on the question of the political status of the prisoners.

The most famous of the hunger strikers, Bobby Sands, was elected to the British House of Commons from his prison cell on April 9, 1981, before he died from starvation on May 5.

Ten prisoners in total died on hunger strike before it was called off on October 3, 1981.

Two days before Sanders wrote to Thatcher, the Burlington aldermen were addressed, unofficially, by Fergus O’Hare, a civil rights activist with a seat on the Belfast Council.

Despite the claims from some aldermen that the address was inappropriate and a vote striking it from the agenda forcing O’Hara to speak unofficially, local media reports from the archive quote the Democratic presidential candidate as saying: “I am delighted to have a member of the Belfast City Council coming here”.

As well as being on the mailing list of the Vermont Committee for Irish Human Rights, and among the US politicians who condemned Thatcher’s willingness to allow prisoners to die on hunger strike, Sanders also showed interest in the “supergrass trials” where paramilitaries were convicted using the evidence of informers.

Again writing to express his concern in 1983, the mayor addressed, in particular, the case of Nicky Kelly, advising that the case would be reopened “so that justice can be served.”

Other events organized by the Vermont Committee for Irish Human Rights included a meeting with Desmond Wilson, a priest from west Belfast, and an address from Irish socialist and republican political activist, who was at one point banned from the US, Bernadette (Devlin) McAliskey.

Sanders is not the only 2016 Presidential candidate to be in some way linked to the “Troubles” or with the republican movement.

Democratic nominee Hillary Clinton herself has stated she was “instrumental” to the Northern Ireland peace process, meeting with women on both sides of the conflict, although people such as David Trimble, who was awarded a Nobel Peace Prize for his own role in the process, have refuted this claim.

President Donald Trump has also been linked with Sinn Féin, attending a Friends of Sinn Féin fundraising dinner and shaking hands with party leader Gerry Adams in New York in 1995.