President Trump slammed the Korean-language film "Parasite" winning an Oscar during a campaign rally in Colorado Springs on February 20. 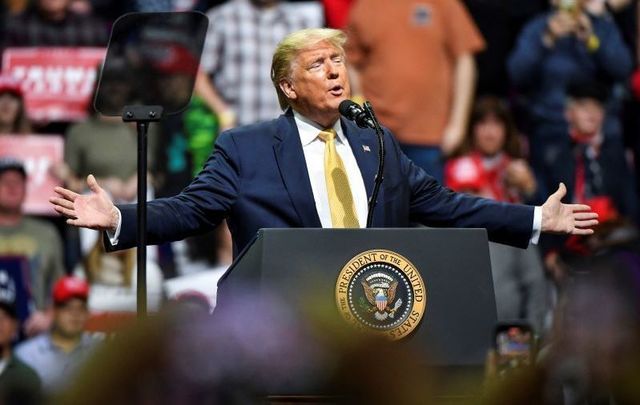 During a campaign rally in Colorado Springs, President Trump said "Let's get 'Gone With The Wind' back, please." Getty Images

“Gone with the Wind,” written by an Irish American, has been criticized as racist in recent years

President Trump said we need more of “Gone with the Wind,” which was written by an Irish American and has been deemed racist in recent years, during a campaign rally this week.

Read More: Will "Gone With the Wind" be banned for racist portrayals of happy slaves?

During the event in Colorado Springs on February 20, President Trump said: “By the way, how bad were the Academy Awards this year? Did you see them?” which is met with boos from the audience.

“And the winner is … a movie from South Korea! What the hell is that about?” Trump says as the audience laughs.

The President was referring to “Parasite,” which won Best Picture at this year's Academy Awards. In doing so, it famously became the first non-English language film to win the major award.

Trump continued: “We’ve got enough problems with South Korea, with trade. On top of it, they give them the best movie of the year?”

“Let’s get ‘Gone with the Wind’ back, please,” to which the audience cheers. “‘Sunset Boulevard,’ so many great movies.

“The winner is, from South Korea! I thought it was Best Foreign Film, Best Foreign Movie. No! Did this ever happen before?”

You can watch Trump’s comments on the recent Academy Awards here:

On Twitter, Trump was quickly slated for criticizing a foreign-language film, and supporting a film that some have deemed racist.

It's bringing up Gone With the Wind that raises this from simple xenophobic ignorance to real dada racism. https://t.co/xRSYEFMlam

Hattie McDaniel, better known as Mammy in Gone with the Wind was not even allowed to sit at the same table as Vivien Leigh or Clark Gable when she won Best Supporting Actress in 1940. Butterfly McQueen wasn’t even allowed in the theater. pic.twitter.com/JsmfmBhVcT

Trump complains that South Korean films are winning Oscars and that we need more like "Gone With The Wind," a movie that even in 1939 was recognized as being racist as hell https://t.co/1pv7KOv8U2 pic.twitter.com/vagYfs1CUy

Gone with the Wind is a romanticized white wash of slavery and the antebellum South and the author Margaret Mitchell had tremendous "economic anxiety." Of course Trump would prefer it over PARASITE, a brilliant movie commenting on classism and income inequality.

The way that President @realDonaldTrump spoke about our longtime South Korean allies last night and her people is a disgrace! The movie #Parasite won the Oscar because it was oscar worthy. This man has a problem with race. Gone with the Wind, 1939. Plantation Life. Really?!

Is "Gone With The Wind" racist?

Last year, IrishCentral reported on the “suddenly frosty reception” the film had begun to receive.

Journalist John Beifuss accuses the 1939 film of "whitewashing" slavery with "its’ suggestion that the true ‘Old South’ was a place of happy 'darkies' who benefited from the gentle temperaments of their owners – popularized a myth that’s proved as hard to kill as a boll weevil."

Beifuss writes: “As Scarlett’s beloved father asserts early in the film, in defiance of 'Yankee' objections: 'We’ll keep our slaves, with or without their approval.'”

The film is based on the book by Margaret Mitchell, whose grandfather and great-grandfather both hailed from Ireland.

Of her grandfather and great-grandfather, Mitchell once said: "They were both Irishmen born and proud of it and prouder still of being Southerners.” Mitchell's biographer Darden Asbury Pyron later wrote: "These two Irishmen helped shaped the most fundamental stuff of Margaret Mitchell’s imagination."

While the film has recently been denounced as racist, contributor David O'Connell wrote in a feature for IrishCentral's sister publication Irish America Magazine: "The narrative voice in Mitchell’s novel echoes neither the self-righteousness of the New Englander, Mrs. Stowe, nor the racial paternalism of Georgia’s Tom Watson.

"In fact, Mitchell, like her mother and Ellen O’Hara in the novel, shows immense compassion for African Americans, seeing their plight through the lens of her Irish background, with its implicit and automatic sympathy for the underdog and the outsider."