From Montana to the US Presidents, to the least Irish county in America the results of the last American Community Survey reveal intriguing facts about American's Irish roots. 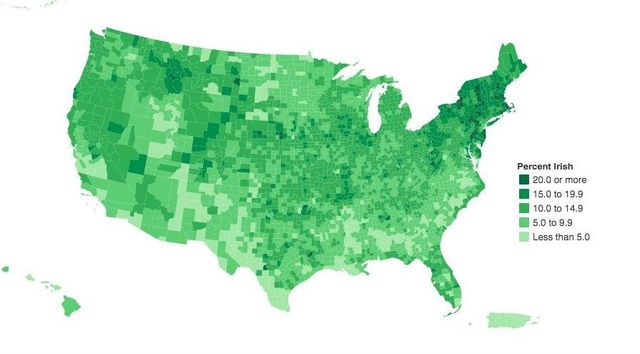 As the second-largest ethnic group in the United States, the Irish figures in the US Census give us a fascinating insight into how Irish America is evolving.

I was recently reading the results of the last American Community Survey conducted by the United States Census Bureau (2015-2019) and noticed some very interesting surprises, including two counties in Montana which break the East Coast dominance of the highest percentage of Irish counties in America.

No surprise, however, that Irish is still the second largest ethnic group in America with 34.5 million (including three million Scots Irish) with Germany on top with 43 million. That number has essentially been unchanged for decades now.

In reality, Irish identity is the strongest of all ethnic groups in America. Hitler and the Third Reich made millions of German Americans think twice about claiming Teutonic heritage and their community cohesion has suffered as a result.

The survey showed that nearly one person out of 10 in America has Irish heritage -- an amazing figure.

The survey revealed that exactly half of the American presidents, 23 in all, are descended from Irish roots, none more so than our current White House occupant of course.

The five states with the most Irish are California, New York, Pennsylvania, Florida, and Texas, numbers that track the largest states overall.

Percentage-wise however, it is New Hampshire which can claim to be the most Irish state. The Granite State boasts a 20.2 percent Irish population, followed by Massachusetts with 19.8 percent, Rhode Island with 17.6 percent Vermont with 17 percent, and Maine with 16.6 percent.  Noticeable, of course, they are all New England states that border each other.

As for the least Irish? Rio Arriba County in New Mexico with 1.1 percent is the lowest followed by Claiborne County, Mississippi, and St. Landry Parish in Louisiana.

In terms of just size, Middlesex County in Massachusetts is the most Irish county with 19.4 percent of its residents of Irish heritage.  Suffolk County on Long Island, New York is the second-largest percentage with 18.1 percent followed by Allegheny County, Pennsylvania with 17.5 percent.

As a percentage of the entire county population overall, regardless of its size,  step forward Cape May, New Jersey as the largest percentage Irish county in America at 30.2 percent of its population claiming Irish heritage, followed by Plymouth County in Massachusetts which is at 30.1 percent.

They are followed by two counties in Montana which are small but very Irish led by Silver Bow County at 28.4 percent and Deer Lodge County at 25.4 percent.

In between, them is Barnstable, Massachusetts with 26 percent, Gloucester County, New Jersey at 26.5 percent, Norfolk County, Massachusetts at 25.6 percent and Lackawanna, Pennsylvania with 25.5 percent.

The Top 10 is rounded out by Washington County in Rhode Island with 25.2 percent Irish, and finally Rensselaer County at 25 percent.

All in all, a fascinating snapshot in time and a firm reassurance that the Irish are still deeply embedded in the American story despite claims that Irish American identity is weakening.