William Patrick "Willy" Hitler was born in Liverpool to a Dublin mother and Hitler's half-brother Alois in 1911. 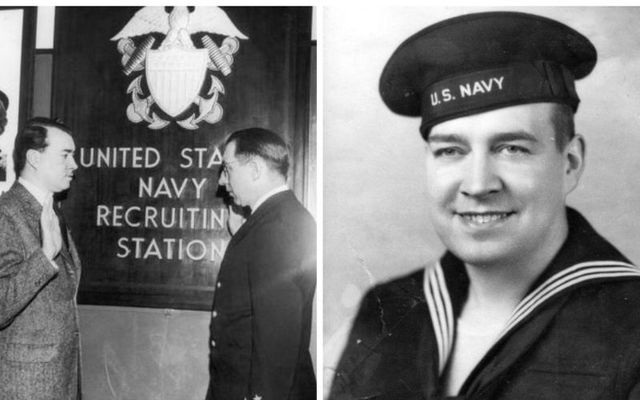 Adolf Hitler's Irish-German nephew signed up to fight against him toward the end of the Second World War. US Naval Institute Twitter.

While Adolf Hitler focused his attention on defeating the Allied Forces during the Secord World War, his nephew William Patrick, who was born in Liverpool to an Irish mother, was signing up to the US Navy to fight against the Nazi leader.

William Patrick Hitler was born to Alois Hitler Jr. - Hitler's half-brother - and Dublin native Bridget Dowling in a house in Liverpool in 1911. Ironically, the house was later bombed by the Luftwaffe during the Battle of Britain at the start of the Second World War.

Alois Hitler abandoned his wife and son and moved back to Germany to start a family and William Patrick, who was affectionately known as "Willy", only reconnected with his father when he turned 18 during a visit to Germany before the Nazis took power.

Willy Hitler attended a Nazi rally with his father during his visit to Germany and later met the Nazi leader in-person during another visit to the country.

He began writing a series of articles about Hitler, who was unhappy about how he was portrayed and demanded that Willy retracted them, according to the Lyon Air Museum.

Willy was fired from his job in England after Hitler became Chancellor of Germany in 1933 due to his relationship with his uncle. He traveled to Germany where he found a hostile uncle who "denied they were relatives" and once again returned to England.

As Hitler moved toward war, Willy tried to join the British Army but was refused on the grounds of his familial ties to the Nazi leader.

He emigrated to the United States in 1939 with his mother and joined the US Navy five years later in 1944 after he wrote to President Franklin D. Roosevelt, who instructed the FBI to conduct a thorough background check.

#OTD in 1944, Willy Hitler joined the fight against his uncle Adolf by enlisting in the U.S. Navy. Initially rejected, he received permission to serve after writing to FDR and getting cleared by the FBI. He later changed his name and lived quietly in NY until his death in 1987. pic.twitter.com/lWn7MdPUi3

Willy Hitler served for three years as a pharmacists' mate in the US Navy and was awarded a Purple Heart for his bravery in the field.

Unsurprisingly, Willy Hitler changed his last name when he returned from the war and became Stuart-Hobson. He moved to Long Island and had four sons with his wife Phyllis and lived a quiet life before dying in 1987.