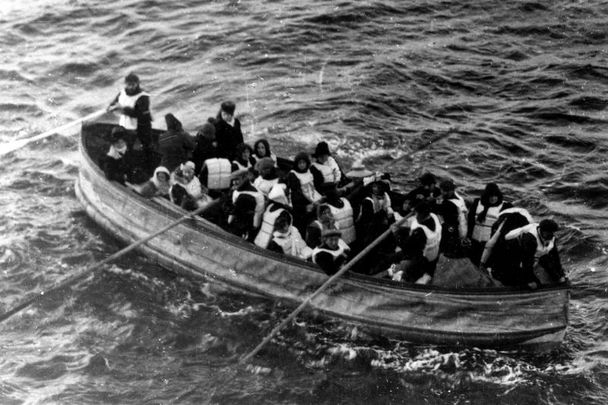 This photograph was taken by a passenger of the Carpathia, the ship that received the Titanic's distress signal and came to rescue the survivors. It shows the last lifeboat successfully launched from the Titanic. Public Domain / National Archives–Northeast Region, New York City

The heartbreaking life story of the "Titanic Waifs" and the Irish woman who cared for them.

Editor's Note: On April 15, 1912, the Belfast-built RMS Titanic sank after colliding with an iceberg, killing over 1,500 passengers and crew on board. This was one of the deadliest commercial peacetime maritime disasters in modern history and among those on board were many Irish. In the run-up to the anniversary of the disaster, IrishCentral will take a look at the Irish on board – the lucky, unlucky and heroic.

The following is an extract from the book “The Irish Aboard the Titanic” by Senan Molony which tells the tales of the people who were on board the night the ship went down. This book gives those people a voice. In it are stories of agony, luck, self-sacrifice, dramatic escapes, and heroes left behind.

Orphans saved from the Titanic by Mary Kelly (22) created one of the abiding sensations of the tragedy. They were the ‘Titanic Waifs,’ two curly-haired French boys named Lolo and Momon, who found themselves alone and adrift in an open lifeboat with only a young Irish girl to comfort them with her crooning foreign tongue. The children were parentless only because their 32-year-old father, Michel Navratil, had stolen them from their mother Marcelle in a tug-of-love snatch from the south of France. Toddler Michel was aged three and his brother Edmond Roger only two. They were smuggled to Southampton where their father signed aboard under the name of Louis Hoffman.

When disaster struck, ‘Hoffman’ handed his two boys lovingly into the arms stretched out to receive them from collapsible D, the last boat lowered. It was near two o’clock now, and close to the end. Mary Kelly helped take them into the boat and then soothed them in their uncomprehending distress.

Mary Kelly was uniquely qualified to do so. A young girl who loved children, she was planning to have many of her own and was on her way to New York to marry the man of her dreams – boyfriend John Heslin from her home place who had traveled over to America some months earlier to prepare a place for them both.

Mary was a domestic and she hoped to get work in the big houses in New York, possibly as a nanny caring for the children of the gentry. With the French boys pressed tearfully to her skirts and bosom, she may have thought it was a little early to begin her calling, but that she needed the practice. When the children were landed safely aboard the Carpathia, a determined effort was made to discover who they were. But the shocked tots were incapable of telling. Eventually, passengers who had known the father on board – he was now floating dead in the Atlantic with a loaded revolver in his pocket – identified them by their false name, Hoffman.

Mary Kelly cared for her charges until they landed in New York when the press had a field day. Eventually, the tots were claimed as a near-trophy by First-Class passenger Margaret Hays, while feverish attempts were made to reunite them with their family. Eventually, Marcelle Navratil came forward and the boys were on their way home.

Miss Kelly meanwhile had moved quietly on and into the arms of John Heslin, with a housewarming gift of $100 from the Red Cross. Not that it compensated for the loss of Mary’s wedding trousseau – the slew of beautiful presents from family and friends – which now lay at the bottom of the Atlantic. Mary and John went on to marry within a year and to have six children. Mary told them that she escaped from steerage because a crew member showed her away to the upper decks through an airshaft or ventilation chamber. She died in her home at Coney Island Avenue, Brooklyn, two days after Christmas 1950. She was 60 years of age.

*“The Irish Aboard the Titanic” by Senan Molony is available online.