Faces of the Titanic: Irishman Jeremiah Burke sent a message in a bottle before his death

This Corkman who died at 19 on the Titanic is fabled to have thrown a message into the sea from the decks of the cruiser. 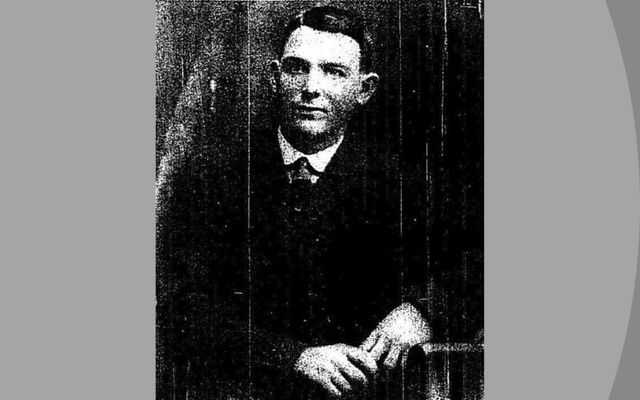 Faces of the Titanic: Jeremiah Burke sent a message in a bottle before his death “The Irish Abroad the Titanic” by Senan Molony.

A native of Co Cork, Titanic passenger Jeremiah Burke is remembered for tossing a message-in-a-bottle overboard from the sinking Titanic.

Editor's note: On April 15, 1912, the Belfast-built RMS Titanic sank after colliding with an iceberg, killing over 1,500 passengers and crew on board. This was one of the deadliest commercial, peacetime maritime disasters in modern history and among those on board were many Irish.

Below is an extract from the book “The Irish Aboard the Titanic” by Senan Molony, which tells the tales of the people who were on board the night the ship went down. This book gives those people a voice. In it are stories of agony, luck, self-sacrifice, dramatic escapes, and heroes left behind.

Jeremiah Burke [19] is the passenger fabled to have thrown a despairing message in a bottle from the decks of the sinking Titanic. Miraculously, the bottle washed up on the shoreline just a short distance from his home in Ireland just over a year later.

The message contains an unclear date which could variously be 10, 12 or 13 April 1912. The Titanic struck the berg at 11.40 p.m. on 14 April. Interestingly, an article in the Irish News, published on 20 April 1912, observed that very few authentic messages from shipwrecks had ever come to safety and "very many … are cruel hoaxes."

Jeremiah’s grieving family believed the message found by a coachman on the shore at Dunkettle, close to their home, was authentic. The message reads: "From Titanic. Good Bye all. Burke of Glanmire, Cork."

Kate Burke, his mother, recognized her son’s handwriting. She announced that the bottle was the same holy water bottle she had given to her boy on the day of his departure.

Jeremiah Burke was only 19 and stood six feet two inches in his stockinged feet. He was the youngest of seven children who had all worked on the 70-acre family farm and stated on embarkation that he was an agricultural laborer.

Two of his sisters had previously emigrated to the US and he was resolved to join them when a letter arrived from Charlestown with money for his passage. His cousin Nora Hegarty, from neighboring Killavarrig, decided to accompany him on the expedition to America.

Jeremiah’s father William drove the cousins to Queenstown in his pony and trap. He reported seeing them making friends with another intending passenger, a piper identified as Eugene Daly. He survived, while both Jeremiah and Nora drowned.

The sympathy of the people of Cork will go out in full measure to the parents of Miss Nora Hegarty of Killavallig, Whitechurch, and Mr. Jeremiah Burke, of Upper Glanmire, both of whom were only 19 years of age and who lost their lives in the Titanic disaster.

They left Queenstown full of hope for a bright and happy career in the United States.

They were seen off by a number of relatives and friends and with them, they cheerfully discussed their future prospects, but alas their young hopes and schemes were doomed by cruel disappointment.

They were both very popular in the Glanmire and Whitechurch districts and the shock which their death occasioned was general and acute. Their parents and relatives will have the sympathy of all in the great sorrow into which they have been plunged.

Then in early summer 1913, the Royal Irish Constabulary contacted the family with the news that a man walking his dog had picked up the message in a bottle at Dunkettle, where the river in Glanmire meets the Lee and flows to the sea. The note is now on public display at the Queenstown Experience visitor attraction in Cobh.

His grandniece has said: "The bottle and note were all his mother had, and in a way, it was like a tombstone. He wouldn’t have thrown away a bottle of holy water his mother gave him. There was an element of panic to it."

The possibility that messages from some of the people left on the doomed Titanic may have been committed to the deep is discussed … Such notes, enclosed in bottles, may have been thrown overboard; and if so, their chances of being found are a hundred times better than those of any messages ever given to the sea.

The US cruiser [sic] MacKay-Bennett is only one of the many ships that will be sent specially to search the scene of the shipwreck, and the possibility of salvaging something from the wreckage is certain to draw many Newfoundland fishing boats to the spot.

It is, of course, true that very few authentic messages from wrecks have ever come to safety. Very many that were first reported turned out to be cruel hoaxes. The bottle- messages that purported to come from the Yongala, which went down off Queensland, and from the Allan liner Huronian, which was lost in the North Atlantic, and from the Waratah, whose fate was never known, were all discovered to be false.

One of the few cases that were considered authentic was the bottle-message that was found sometime after the Bay of Bengal sailed from England, saying that she had been wrecked almost immediately after putting to sea. Nothing more was ever heard of this ship.

The theme of the ship that sailed and was never seen again has always had a horrible fascination. The White Star steamer Naronic was built in 1892 and was described as the finest and safest vessel ever launched.

She left Liverpool for New York on February 11, 1893, and then disappeared forever.

But six weeks afterward a champagne bottle was found on the beach at Ocean View, Virginia, containing a letter alleged to have been written by John Olsen, a cattleman on board.

"The Naronic is fast sinking. It is such a storm that we cannot live in the small boats. One boat with its human cargo has already sunk. We have been struck by an iceberg in the blinding snow. The ship has floated for two hours. It is now 3.20 in the morning, and the deck is level with the sea."

That is all we have ever heard of the Naronic.

But here is a case of a Corkman’s bottle, thrown overboard in mid-ocean, which indeed drifted for a year before making landfall, albeit on a different coast:

Long Journey of a Corkman’s Message

On the 23rd February 1931 when the Dresden was 2,125 miles from Cove, Mr. Michael O’Sullivan, who originally hailed from the Mallow district, dropped a bottle overboard containing the following message –

February 21, 1931. Tourist cabin 336A. – On board the SS Dresden from Bremerhaven via Cherbourg and Queenstown to New York … This note in an airtight bottle has been cast overboard 2,125 miles from Queenstown and at a latitude N. 41.32, and longitude W. 62.18. Finder please send to Cork Weekly Examiner, Patrick Street, Cork city, Ireland, giving your name and address and where found and when …

On Saturday last, 26 March, the Editor received a letter enclosing the message from Miss A. McBride, the Belleview Biltmore Hotel, Belleair, Florida. Miss McBride had picked up the bottle on the beach at Belleair while bathing on March 6, 1932. Here is her letter:

"While bathing at a local beach here in Florida I found the enclosed note which was dropped from the SS Dresden by a Mr. O’Sullivan and I am carrying out his instructions by sending it to you – sincerely Miss A. McBride.

We leave it to our nautical readers to calculate the exact mileage covered by that bottle. It must have drifted over one thousand miles almost exactly in twelve months. We hope that Mr. O’Sullivan will communicate to us his present address when we will have much pleasure in returning to him his note, which is in marvelously good condition, after its adventurous voyage.

Jeremiah Burke left total assets of just £10, according to a subsequent application for administration of his estate by his father.