Who was the longest-living Irish survivor of the Titanic?

The Co Cork woman, who lived to the age of 98, told how men in steerage were held back and that she witnessed murders aboard the sinking Titanic. 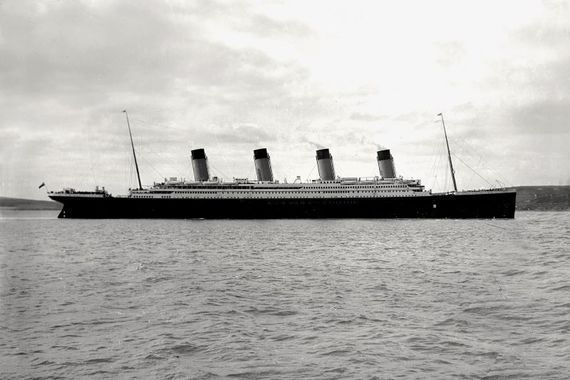 Ellen Shine was a Cork-born Titanic survivor, who lived to the age of 98. The survivor told tales of how men in steerage were held back and that she witnessed murders.

Editor's note: On April 15, 1912, the Belfast-built RMS Titanic sank, after colliding with an iceberg, killing over 1,500 passengers and crew on board. This was one of the deadliest commercial, peacetime maritime disasters in modern history and among those on board were many Irish. This month IrishCentral takes a look at the Irish on board – the lucky, unlucky and heroic.

The longest-lived Irish survivor of the Titanic was Ellen Shine. She reached the age of 98 (although she had convinced herself she was 101), dying in Long Island, New York, in 1993. She told a story of the men in steerage being kept back and was quoted as witnessing actual killings.

A thrilling story was told by Ellen Shine, a 20-year-old girl from County Cork who crossed to America to visit her brother.

"Those who were able to get out of bed," said Miss Shine, "rushed to the upper deck where they were met by members of the crew who endeavored to keep them in the steerage quarters.

"The women, however, rushed past the men and finally reached the upper deck. When they were informed that the boat was sinking, most of them fell on their knees and began to pray. I saw one of the lifeboats and made for it.

"In it, there were already four men from the steerage who refused to obey an officer who ordered them out. They were however finally turned out." – Reuter

That report, carried in The Times of London on Saturday, 20 April, is exactly the same as quotes attributed to Ellen Shine and carried in the Denver Post, the Daily Times, and other US newspapers on the previous day, with one difference. The American reports continued:

"… in it were four men from the steerage. They were ordered out by an officer and refused to leave. And then one of the officers jumped into the boat, and, drawing a revolver, shot the four men dead. Their bodies were picked out from the bottom of the boat and thrown into the ocean."

How can posterity reconcile these two versions? Were the claimed killings the product of a survivor’s fevered mind or a journalist’s reckless embellishment? Did Reuter deliberately choose to tone down the story by plucking it from another source, or was there simply no mention by Ellen of any killings in the first place? No other witnesses described four men being callously shot inside a lifeboat by an officer of the White Star Line, and no bodies were ever recovered with discernible gunshot wounds.

Ellen Shine appears to have escaped in lifeboat No. 13, which was located at the second-last boat on the starboard side, towards the stern. Eugene Daly frankly confesses that he was a steerage passenger who climbed into a lifeboat in defiance of orders at this location. Daly said he was forced from a boat at the ‘second cabin deck,’ an area of promenade for middle-ranking passengers, and talks of being on the starboard side, where boat No. 13 was lowering:

"We afterward went to the second cabin deck and the two girls and myself got into a boat. An officer called on me to go back, but I would not stir. Then they got a hold of me and pulled me out."

No one testified to any disorder at boat No. 13 at the two official inquiries. Steward Frederick Ray, who was in this boat, told the US Senate investigators, in reply to questions, that he saw no male passengers or men of the crew "ordered out or thrown out of these lifeboats on the starboard side. Everybody was very orderly."

But Irish passenger Dannie Buckley declared: "Time and again officers would drag men from the boats … " Resolution of the problem is elusive. Should one disregard the claims of men shot dead for staying stubbornly in a lifeboat? Someone somewhere is spinning pure invention.

Ellen Shine told her story once and would never be drawn on it again. According to the embarkation records, she was an 18-year-old spinster, but by the time US immigration had come aboard the Carpathia, she declared herself to be a 16-year-old servant from Newmarket, County Cork. She was actually aged 17 when she boarded the Titanic and from the small hamlet of Lisrobin (Buckley mistakenly referred to her as ‘the Shine girl from Lismore’ in a letter home composed on the Carpathia). She was on her way to join her brother Jeremiah in New York

Ellen collapsed in hysterics when met by Jeremiah and other relatives at the Cunard pier in New York, according to the Brooklyn Daily Eagle. It reported the next day that she and other women had knocked down crewmen who tried to prevent steerage passengers from reaching the boat deck.

Ellen’s was case number 418 to be dealt with by the American Red Cross. The notes from this report record her saying she was aged 16 and that she had lost clothing and a cash sum of $500. She was awarded $100 in aid.

In later years, Ellen Shine married and became Mrs. John Callaghan. Her husband, a firefighter, hailed from Kiskeam, also in Cork, and they settled in New York. They first returned to Ireland only in 1959, on the Mauretania, but made a number of visits thereafter. The couple had two daughters, Julia and Mary, whom Ellen would be fated to outlive.

In 1976 she moved from Manhattan to Long Island to be with her family following the death of her husband. In 1982 she entered Glengariff nursing home where she celebrated her 100th birthday in 1991 – three years early. By this stage, however, Ellen was in the advanced stages of Alzheimer’s disease. Never having discussed the Titanic disaster in nearly seventy years, she suddenly could not stop babbling about it. A torrent of Titanic revelations flowed from her loosened tongue to the irritation of other residents. When Ellen finally wanted to talk about the disaster, no one was listening.

A survivor of the Titanic Dies: Glen Cove woman was 101

Helen Shine Callaghan of Glen Cove, one of the last survivors of the sinking of the Titanic in 1912, died yesterday at North Shore University Hospital at Glen Cove at the age of 101.

Callaghan, who was a resident of the Glengariff Nursing Home in Glen Cove, was 20 when she left her native Cork County, Ireland, for a better life in the United States, according to her granddaughter, Christine Quinn [in 2011, the Speaker of the New York City Council].

‘She was from a big family and her parents were deceased and her sister was head of the family and decided that some of the siblings had to go to America,’ said Quinn.

Like many of the survivors, Callaghan rarely discussed the tragedy. ‘I remember asking her questions as a girl. She never really answered them directly,’ Quinn said. ‘My mother only found out about it when she was in school and the teacher passed around a list with the survivors’ names on it and she saw her mother’s name on the list.’

*“The Irish Aboard the Titanic” by Senan Molony is available online.