On this day in 1912, the RMS Carpathia arrived in New York having rescued passengers and crew from the Titanic after it was struck by an iceberg and sank on April 15, 1912. 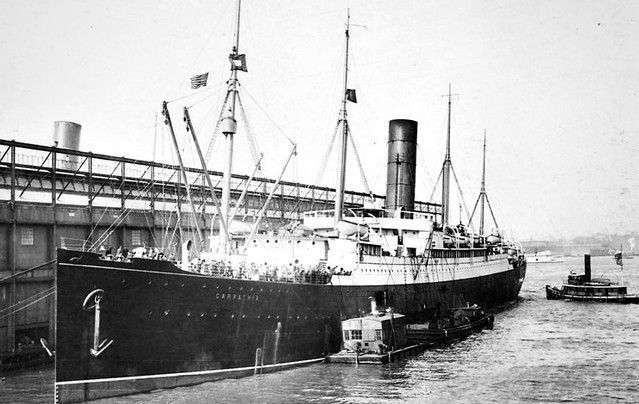 On this day in 1912, the RMS Carpathia arrived in New York having rescued passengers and crew from the Titanic after it was struck by an iceberg and sank on April 15, 1912.

Carpathia, a Cunard Line transatlantic passenger steamship, received a distress call from the "unsinkable" Titanic as it was making its way from New York to Fiume, Austria-Hungary (now Rijeka, Croatia).

Carpathia’s captain, Arthur Rostron, later testified that the distance to Titanic was 58 nautical miles (67 miles) and was expected to take three and a half hours to reach the doomed liner as its top speed was about 14.5 knots.

However, braving dangerous ice fields of its own, Rostron ordered extra stokers to feed coal and cut off heating and hot water elsewhere in order to supply the ship's engines with as much steam as possible.

Those decisions helped accelerate the ship to more than 17 knots and the Carpathia arrived on the scene approximately an hour and a 40 minutes after Titanic had went down.

For the next four and a half hours, the ship rescued 705 survivors from Titanic's lifeboats.

Slowed by storms and fog since early Tuesday,  April 16, 1912, Carpathia arrived in a cold and rainy New York evening on Thursday, April 18, escorted by the scout cruiser USS Chester.

Carpathia first bypassed Pier 54, its Cunard Line pier, and sailed up the Hudson River to Pier 59, the berth for White Star Line and where Titanic was supposed to have arrived.

Having dropped off the empty lifeboats, Carpathia then sailed back toward Pier 54.

A tug boat filled with photographers followed the ship to the pier, and the flashlight of cameras lit up the ship in the night sky to reveal that the decks were crammed with passengers.

Tens of thousands of people gathered around Pier 54 to meet them and receive the first physical confirmation of the maritime disaster.

On the orders of Rostron, Carpathia's passengers disembarked first, believing the scene would become tumultuous as soon as Titanic survivors first appeared.

That moment came when a teary-eyed woman with makeshift clothes descended a gangplank and stumbled away from the boat into the arms of an officer.

Carpathia - What happened next?

The Carpathia was initially a transatlantic passenger ship that made its maiden voyage in 1903. During the First World War, the Carpathia was used to transfer Canadian and American Expeditionary Forces to Europe.

On July 15, 1918, under the command of Captain William Prothero, it was a part of a large convoy that was making its way from Liverpool to Boston.

Two days later, carrying 57 passengers and 166 crew, it was torpedoed on the port side by a German U-boat off the southwest coast of Ireland.

That was followed by a second strike which penetrated the engine room, killing three firemen and two trimmers.

Prothero gave the order to abandon ship and all passengers and the surviving crew members boarded the lifeboats.

A third torpedo strike hit the gunner's rooms, resulting in a large explosion that doomed the ship. The U-boat started approaching the lifeboats when the HMS Snowdrop arrived on the scene and drove away the submarine with gunfire before picking up its survivors.

The wreck was only discovered in 2000 after an 80 year-long search for the missing ship.