Check out the story of the name McCarthy, its family crest, coat of arms, and famous members. 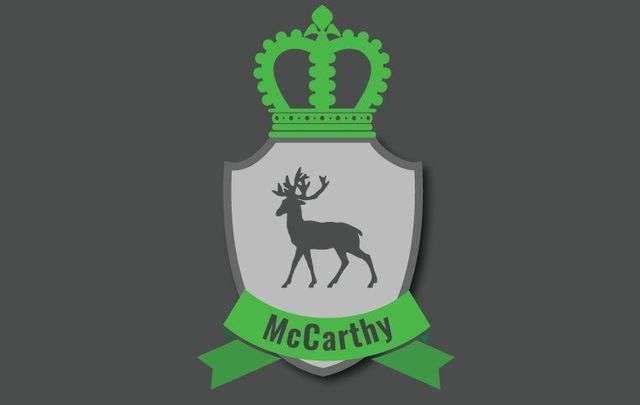 Here are some interesting facts about the Irish last name McCarthy, including its history, family crest, coat of arms, and famous clan members. ja

Everything you need to know about the Irish surname McCarthy.

"Son of the loving."

"Nothing is Difficult to the Brave and Faithful."

History of the McCarthy name:

The name McCarthy originally appeared in Gaelic as Mac Carthaigh, which is derived from the word "carthach," which means "loving."

Saint Carthach the Elder appears in "the 'Felire' of Engus the Culdee (10th cent.) with the epithets of royal and Roman attached to his name. This is generally interpreted to mean that he was of royal ancestry, and had traveled to Rome

From the 'Vita Kierani' (Bollandist A. SS., March, v. 395) it's gathered that Saint Carthach was the grandson of Angus, king of Munster, who would seem to be the king whose death is recorded in the "Four Masters", in 489.

In the "Vita Kierani", St. Carthach appears, before the death of St. Patrick, as one of St. Ciaran of Saighir's young disciples."

Saint Cathach the Younger also called Mochuda, was "the founder of the famous monastery at Rahen, and bishop of Lismore, was the son of Finnall... According to his legendary life, which, however, seems to have preserved much that is historical, he was born in Kerry, of the race of Fergus."

Interesting facts about the McCarthy surname:

McCarthyism is named for US Senator Joseph McCarthy, who pursued people he thought were members of a “communist conspiracy.”

Fineen Mac Carthy Reagh, who was chief of the barony of Carbery in West Cork in 1572 and who resided at the famous Blarney Castle, is renowned for being the originator of the use of the word 'blarney' meaning a verbal smokescreen.

McCarthy is the most popular "Mc" surname in Ireland.