All the basics - and some fun facts - about County Kerry. 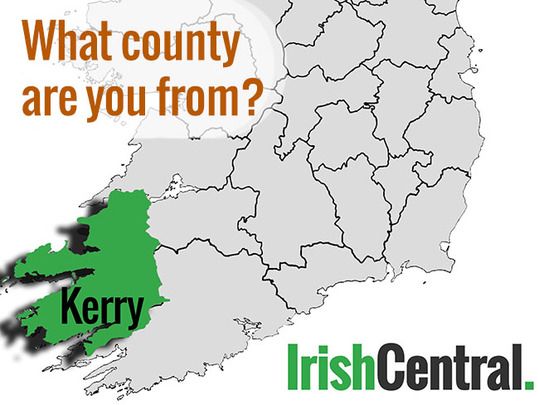 A brief history: Kerry’s name in Irish, Ciarraí, translates to “people of Ciar,” which is the name of the pre-Gaelic tribe who dominated the area.

For centuries, Kerry was part of the Kingdom of Desmond, which also included parts of modern-day Cork. In 1329, the 1st Earl of Desmond Maurice FitzGerald was granted feudal seniority over the region, which transferred to his heirs.

After the Nine Years’ War, which lasted from 1594 – 1603, much of Kerry’s lands were divided and given out to English ‘planter’ families, who settled there. From the Irish Rebellion of 1641 to 1652, Kerry was held by Donagh McCarthy, 1st Viscount Muskerry. It was one of the last areas to fall to Cromwellian rule.

A big farming county, Kerry was particularly hard hit by the Great Hunger, leading a significant number of its population to immigrate.

The county experienced a lot of tumult during the Irish Civil War, as former allies splintered into pro and anti-treaty factions.

Kerry remains a stronghold for the Irish language, with over 6,000 native Irish speakers – 5,000 of them within the Kerry Gaeltacht area.

Key Attractions: Known as ‘the kingdom,’ the county of Kerry is rightly famous as one of Ireland's most popular tourism spots, with its equal – and magnificent – share of coastline, mountains, valleys and lakes.

The Lakes of Killarney are especially famous, and Killarney National Park is a popular place to explore. The lakes are studded with islands, and Muckross Abbey and Ross Castle are sites of historical interest. Some of the first-ever short films shot in Ireland, by the American O’Kalem Film Company, were shot in the Killarney landscape.

The Dingle peninsula is also very popular, with its rich arts scene, many pubs, and unique attractions such as Fungie the Dolphin. The western end of the Dingle peninsula provides a great many monuments dating back several centuries, from early Christian sites to Celtic ring-forts and burial sites. Mount Brandon, the highest mountain peak in the county and ninth-highest on the island of Ireland, offers spectacular views – provided it isn’t too cloudy.

Kerry also appeals to stargazers for its clear, unobstructed views of the night sky.

The Ring of Kerry is one of the most scenic tours in Ireland. The most popular approach is to start in Killarney and make one’s way to Kenmare, along the Iveragh Peninsula and then back again through a number of charming villages, but many visitors also prefer to drive it the other way around!

The Blasket Islands, most westerly islands in Europe, were inhabited for thousands of years until 1953, when the last inhabitants were moved to the mainland. The Great Blasket island offers a peek back in time, with no electricity or no cars.