Remembering from afar - 9/11 memorials in Ireland

Many memorials were built after the realization that so many people would not be coming home. There are 5 in Ireland. 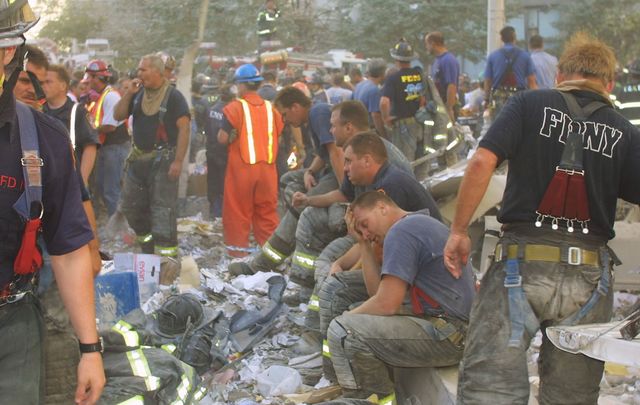 Victims of the September 11 attacks are remembered in memorials across Ireland.

In the 20 years since the attacks on September 11, 2001, memorials both big and small have been built throughout the United States and across the globe. The most immediate ones were impromptu – garlands draped on a parked car it became clear no one would claim, notes and photographs taped to fences and walls around New York City, candles placed outside of Ladder Company firehouses.

Others came in time. With the realization that so many people would not be coming home, names were added to lists that grew longer and longer. Names of firefighters, of executives and their staff members, of police officers, of building workers, of airplane passengers, of Pentagon officials – 2,973 in total. Their names are now engraved and commemorated in hundreds of permanent memorials in the most directly devastated areas – New York, New Jersey, Washington, DC, and Pennsylvania – and in some less expected places, providing a lasting reminder of the global effect of the September 11th attacks.

Five such memorials have been built in Ireland. At least 18 Irish citizens – 7 born on the island of Ireland – died that day, as did scores of other people of Irish descent – from many of the financial workers in the upper floors of the Twin Towers to a significant number of the brave FDNY and NYPD members who tried to rescue them.

Ireland’s national monument to the most Irish of the U.S. Army’s Infantry Regiments, the Fighting 69th, also serves as a tribute to the civilians who perished on 9/11 and to the soldiers of the 69th who were among the first military units to respond following the attacks, and who have served in the war in Iraq. Located in Ballymote, Co. Sligo, the memorial was dedicated in August 2006 by New York City Mayor Michael Bloomberg and family members of Irish-American victims of 9/11, including Jack Lynch, the father of Irish-American firefighter Michael Lynch, who was killed during the collapse of Tower 2.

The monument consists of a copper cylinder, which is intertwined with steel donated from the wreckage of the World Trade Center. Etched images of Sligo native and Civil War Brigadier General Michael Corcoran, one of the commanders of the Fighting 69th, adorn the structure.

Co. Kildare pays tribute to the 402 public officials who died during the 9/11 attacks

In Donadea Forest Park, Co. Kildare, a pair of scaled-down limestone replicas of the Twin Towers stand in a clearing surrounded by oak tree saplings. Officially presented on September 21, 2003, the memorial towers are engraved with the names of the 402 public officials who died during the attacks.

The inspiration for the memorial was Sean Tallon, a young fireman whose family had emigrated from Dondea to New York, who had frequently visited his grandparents in Dondea. At the ceremony, Kildare Mayor Michael Fitzpatrick said “We wanted to do something to remember Sean and his colleagues and all the other public officials who died that day. This wonderful memorial is the result.”

Glendalough, Co. Wicklow, one of Ireland’s most well-known places of Christian pilgrimage, offers visitors a quiet space to contemplate the events and aftermath of 9/11. Part of the larger spiritual journey of the Glendalough Hermitage Centre’s meditation garden, Br. Joseph McNally’s sculpture of the towers “marks the tragedy and challenge to peace posed by this event and is located in the context of a path reflecting on the defining choices we make.”

Those words could just as easily be applied to FDNY Chaplain Fr. Mychal Judge, whose defining choice to help those in need and to offer comfort in times of trouble ultimately lead to his death on the morning of September 11th. Two memorials in Ireland recognize his incredible journey and testify to his lasting influence.

The son of immigrants from Co. Leitrim, Fr. Judge began his seminary training at age 15 and was ordained as a Roman Catholic priest thirteen years later, in 1961. A dedicated Franciscan, he was also one of the Order of the Friars Minor, and served at the Church of St. Francis of Assisi on West 31st Street, right across from the Engine Company 1/Ladder Company 4 firehouse. 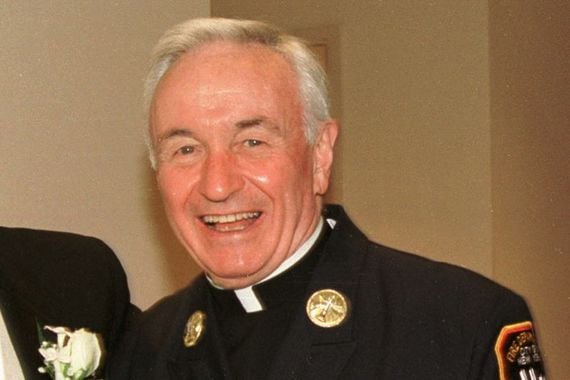 In September 2001, Fr. Judge had been Chaplain of the FDNY for 9 years – always there for victims, firefighters, and their families. He was in the lobby of the North Tower, delivering prayers and aid when he was crushed by debris from the collapse of the South Tower at 9:59 am. His body was recovered and was among the first to be carried out of Ground Zero, which made Fr. Judge, on the official record, victim 0001.

The people of Keshkerrigan, Co. Leitrim, the town Fr. Judge’s father left in 1926, and which he had visited the year before, built a memorial in his honor and in remembrance of all those whose lives were lost. The Fr. Mychal Judge Peace Garden sits on land that belonged to the Judge family, on the shores of Kesh Lake, just outside the main village. Fr. Judge’s twin sister, Dymphna Jessich, traveled from New York for the inaugural commemoration ceremony on September 11, 2005, and donated the flag that covered Fr. Judge’s casket to the town of their father’s ancestors. The memorial was hailed by Michael Daly of the New York Daily News as “An Irish Tribute that Gets it Right.”

Across the island, in Kinsale, Co. Cork, a second Irish memorial honors Fr. Judge, and the firefighters he both worked with and befriended. The Ringfinnan Garden of Remembrance contains 343 trees – one for each of the firefighters and first responders lost. It was initiated by Kathleen Murphy, a nurse in New York City who was born in Kinsale and whose family continues to live there. The first tree was planted just two months after 9/11, in  November 2001, and the garden was officially dedicated on March 10, 2002.