The pro-life march in Dublin, organized in advance of the US Supreme Court judgment on Roe V Wade and billed as an event to hold the Irish government’s abortion laws to account, was dominated by happenings in America. 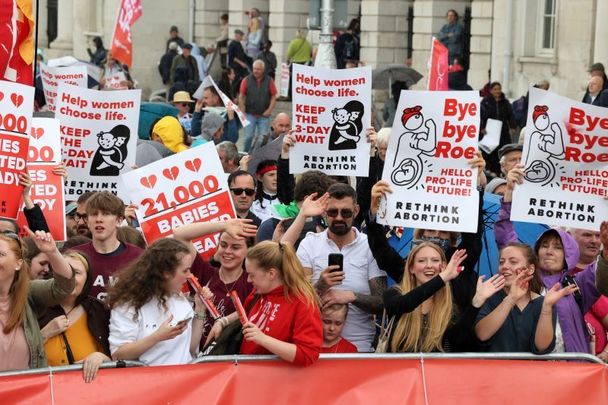 The aftershocks from the US Supreme Court's seismic overturning of Roe v. Wade hit Ireland last weekend with a pro-life rally in Dublin on Saturday, July 2 having a large attendance, most of whom were clearly buoyed by the decision of the court.

It was the first in-person national anti-abortion march in Ireland since 2019, and while a decision by some local authorities to ban street advertising for the event undoubtedly suppressed attendance, several thousand people marched through the center of Dublin accompanied by musicians and bands. They were addressed by a number of national and international speakers as the implications of America’s restriction on abortion rights were mulled over.

Organized well in advance of the Supreme Court judgment and billed as an event to hold the Irish government’s abortion laws to account, in truth, the march was dominated by happenings in America.

It was a good-humoured crowd that assembled at the Garden of Remembrance in Dublin’s O’Connell Street. The start was delayed and the mood was slightly spoiled by overzealous policing which detained a heritage 1960s double-decker bus that was being used to transport musicians and elderly people to the rally on the city’s quays. A female member of the Garda rather spectacularly drove a patrol car in front of the bus so that it couldn’t move. A case of Cagney and Lacey coming to town.

When the march finally set off, the chant that went up was “Roe v. Wade is overturned,” to which the crowd retorted, “Come on Ireland it’s your turn.”

Posters handed out by the organisers were held aloft with the message “Bye Bye Roe Hello Pro-Life Future.” Led by a color party of young, next-generation pro-lifers, the march exuded energy and enthusiasm.

There was some opposition to the event from bystanders with one group of about a dozen people shouting obscenities. But stewards effectively shielded the marchers and there was no trouble.

Unhappy also were a number of young people waiting for buses to go to a pop concert in Dublin’s Marlay Park, glum faces at bus stops suggesting that they had other things on their minds. But the pedestrians on O’Connell Street were predominantly kitted out in the yellow and blue of Clare who were due to play an All-Ireland hurling semifinal against Kilkenny later that day in Croke Park.

“Lambs to the slaughter” one elderly gentleman beside me prophetically observed. Like the concertgoers, the sports fans were focused elsewhere though some good-humoured banter shot back and forth.

Saturday’s rally followed one last week at the American Embassy in Dublin which was a protest against the Roe v. Wade decision. The Supreme Court’s verdict also led to a slew of politicians virtue-signalling their opposition to the ruling.

There were none more unctuous or risible than Taoiseach Micheál Martin’s comments that the reason Roe was overturned was because of the “politicization of the judiciary in the U.S.A., something we should avoid” (in Ireland). What planet has that man been living on for the past 30 years?

Ireland has arguably the most politicized judiciary in the Western world. Less than two years ago, there was major dispute over the appointment to our Supreme Court of Seamus Woulfe, a former member of Fine Gael in Dublin and an election agent for ex-Fine Gael Minister Richard Bruton.

The allegation was that four individuals indicated an interest in the position but only one, Woulfe, was considered and duly appointed. On a hypocrisy scale, Martin’s comments would score highly.

At the rally, the substantive issue of abortion, which was introduced four years ago in Ireland, was addressed. Barely one in 10 GPs are offering abortion services and only 11 out of 19 maternity hospitals are currently providing full abortion treatment in line with the law.

A major focus for the rally was to ensure that the three-day wait from an initial visit to a doctor to having an abortion would not be removed. Figures mentioned indicated that up to 1,000 women decided not to go through with an abortion after seeking an initial consultation.

“Often you face setbacks, because the pro-life message is counter-cultural, and is falsely portrayed as negative, anti-women, anti-choice, or lacking in compassion.

“Sometimes, as in the recent decision of the United States Supreme Court on Roe v. Wade, there are hopeful and encouraging signs that the context is shifting and that the rebuilding of a culture of life is possible.”

“We will continue to seek dialogue about how a respectful and life-supporting environment can be created for every person in Ireland, at every stage and in every state of life.” - @ArchbishopEamon Martin #RallyforLife pic.twitter.com/dRXwLgB0Ii

It’s clear that one objective of the day was to prepare for the political battle ahead. There is currently a review of Ireland’s abortion laws, with some believing they should be more liberal, calling for the repeal of the mandatory three-day waiting period, abolition of the 12-week limit for abortion on request, and revoking the “conscientious objection” clause for doctors who refuse to provide abortion services.

The review, which involves the views of service users, information from service providers, and submissions from the public consultation, is due to be completed by the end of the year and will then inform any changes to abortion in Ireland. Expect sparks to fly at that juncture.

No doubt there will be much back and forth between both sides in this contentious debate. Pro-choice supporters want it out of the Constitution in Ireland but in it in the US, while the opposite is true for the pro-life side.

The fact is that the vast majority of people are somewhere in the middle of this debate. On Saturday, it was expressed by one young teenage girl I overheard talking to her friends as the march passed by. “I’m against abortion,” she said, “but I don’t know how I would react if I was raped.”

That is the dilemma for all of us to face up to. My view, for what it’s worth, is put in the resources, time, and money to ensure that when a woman makes a choice that it’s a no-brainer to choose life.

Sadly, this is not a priority for the Irish government with chaos in the health services, child care costs out of control, and lack of funding in particular for disability services. For lazy politicians, finger-pointing at another country’s judicial system is a much easier option.

*This column first appeared in the July 6 edition of the weekly Irish Voice newspaper, sister publication to IrishCentral. Michael O'Dowd is brothers with Niall O'Dowd, founder of IrishCentral and the Irish Voice.

Why priestly celibacy must continue in the Catholic Church