Trading places: Ireland moves forward while Supreme Court hurtles US back to the Stone Age

It would have been unthinkable 20 years ago that abortion would be legal in Ireland and illegal in many parts of the US, the self-proclaimed land of the free. 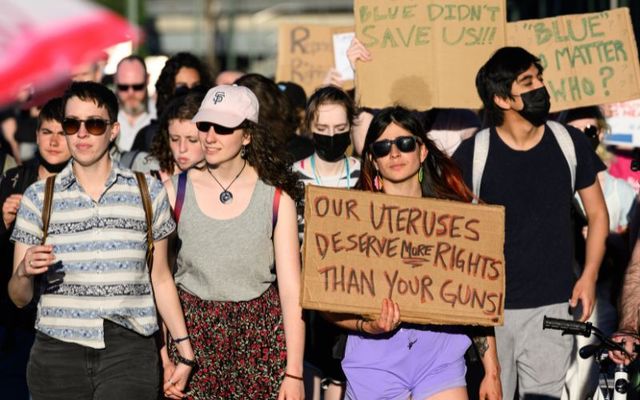 People march across the Hawthorne Bridge to protest the Supreme Court's decision to overturn Roe v. Wade on June 24, 2022, in Portland, Oregon. Getty

As Ireland hurtles into modernity following a host of progressive referenda results in the 2010s, the US hurtles back into the Stone Age under the direction of an unelected group of judges who wield their power purely because their views align with those of a former president.

It would have been unthinkable 20 years ago that abortion would be legal in Ireland and illegal in many parts of the US, the self-proclaimed land of the free.

The US Supreme Court's hotly debated 6-3 decision to strike down Roe v Wade will almost certainly see the practice outlawed in at least 26 states, forcing women who wish to obtain an abortion to travel to the states that will still permit it.

Whereas Ireland's legalization of both same-sex marriage and abortion reflected public opinion, the Supreme Court's decision to overrule Roe v Wade emphatically did not do so.

The six judges who struck down Roe v Wade do not reflect the will of the American people, especially not the will of American women.

All six judges were nominated by Republican presidents - a party that has won one popular vote since the 1980s - and five of the six judges are men over the age of 50. While, Amy Coney Barrett - the sixth judge - is a Trump appointee who believes that homosexuality is a preference.

In essence, none of the six judges have the right to speak on behalf of women who can have children.

That an issue as important as abortion should be left to nine judges' interpretation of a 250-year-old document that is open to countless interpretations is utterly daft in any case.

Delivering their ruling, the SCOTUS judges said abortion is not protected by any constitutional provision, a flimsy and hypocritical argument at best.

Consider another SCOTUS judgment delivered earlier in the week that struck down a New York State law requiring applicants for a license to carry a gun outside their home to have "proper cause" to do so.

In another 6-3 verdict, the SCOTUS judges said the law violated citizens' Second Amendment rights, but just as the six judges argued that there is no constitutional provision that guarantees abortion, neither is there one that guarantees the right to carry a firearm outside without a license.

The Second Amendment is the most hotly debated piece of legislation in US politics and is open to countless interpretations.

Dating back to the post-revolutionary period, the 230-year-old amendment references a "well-regulated militia" during a period when muskets were commonplace and school shootings were not.

Just as the SCOTUS justices argued that there is no constitutional protection for abortion, neither is there any guarantee that citizens can carry a firearm without showing proper cause.

"A well regulated Militia, being necessary to the security of a free State, the right of the people to keep and bear Arms, shall not be infringed," is a piece of grammatical nonsense and its interpretation depends on the political viewpoint of the person reading it.

In this case, the six people that mattered all had ties to the Republican party. And again, their viewpoint did not reflect the view of the people.

The majority of Americans are in favor of stricter gun regulation, with 53% of Americans calling for stricter measures in a 2021 Pew Research Center poll.

Considering that the poll was conducted before the massacres in Buffalo and Uvalde, that figure is likely to be far higher now.

Instead, it is left to nine life-long political appointees to make some of the most important decisions in modern-day American politics when most of them are out of touch with reality and toe the line of the party that appointed them more often than not.

At a time when most Americans are screaming for more restrictions, the Supreme Court actually went in the opposite direction, showing more compassion for guns than women's reproductive rights.

Conservative Justice Samuel Alito wrote in his Roe v Wade verdict that the issue of abortion should be returned to politicians to vote on and that is all well and good, but Democrats are hamstrung by an undemocratic filibuster in the Senate.

The filibuster, which requires at least 60 votes to pass most legislation in the Senate, effectively ensures that almost no meaningful progressive legislation will be passed during this political term, even though Democrats currently control the House, Senate, and Presidency.

But with the Senate tied at 50/50, the chances of Democrats securing ten Republican votes on divisive issues like abortion on gun control are practically zero.

It is minority rule at its worst. The 50 Republican Senators only represent 48% of the US population but can still shape the nation.

Everything in US politics is weighted against real change and in favor of the minority.

The Constitution, SCOTUS, filibuster, Electoral College, and any other antiquated and outdated political institution all help to stymie progress and ensure that the Republican Party remains relevant.

Those institutions have contributed to outlawing abortion in roughly half of US states, but they will not stop abortions in those states; they will simply force women to look for other means, incur higher costs, and take greater health risks.

Ireland, on the other hand, will continue to make strides into the future under the guidance of its people.