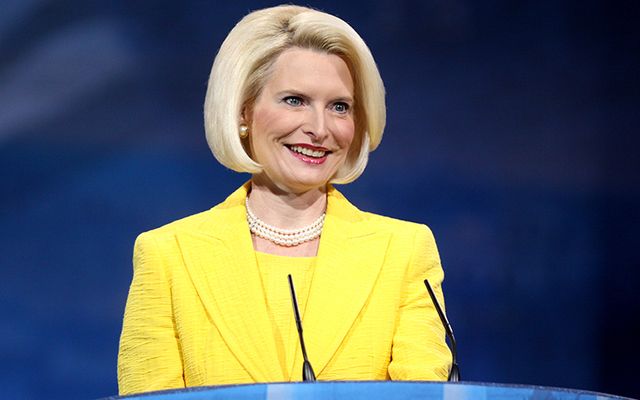 Jesus Christ had it right.

In the Gospel according to John, chapter 8, verses 3–7 the scribes and Pharisees bring an adulterer to meet him saying Moses commanded them to stone such a woman and what did he think?

Jesus responded, “Let him without sin cast the first stone.”

That shut them up.

Alas, I now must cast one of the first stones against an adulterer—Lord help me. 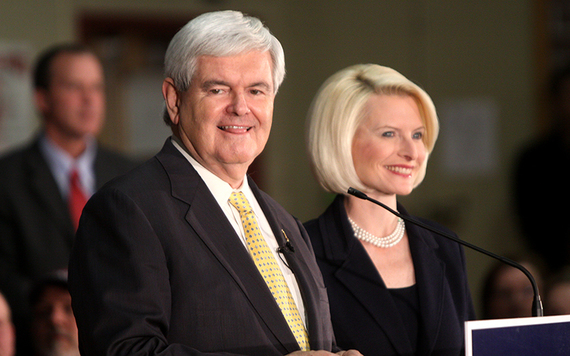 Only the philandering, thrice married President, Donald J. Trump, could pick a famous unfaithful couple like Callista and Newt Gingrich to represent the United States of America at the Holy See.

It’s as if Trump is trying to personally troll the Pope by sending this twosome to swim in the Holy See. Callista’s many fine achievements, apart from bedding Newt when his wife wasn’t home, include seven children’s books about Ellis the Elephant.

The elephant in the room is much more interesting—her role in Newt’s second marriage break-up. She testified she and the naughty Newt had a six-year affair while he was married.

The Church has enough problems with sex—you know, birth control, abortion and, most famously, young boys hanging around cassocks—but to take one of the most famous adulterous couples in American history and send them as diplomats to the venerated Vatican is practically a parody written by The Onion.

It all comes back to Newt

But like in the “Ellis the Elephant” stories, let us start at the beginning. If you could pin today’s rancid political discord on one individual, it would be Newt Gingrich, who started it all when he was a punk GOP congressman from Georgia. Newt Gingrich, it is safe to say, paved the way for Trump’s “Grab them by the p*****y” mindset.

Newt invented modern congressional guerrilla warfare. In the days of Speaker Tip O’Neill Republicans and Democrats used to argue all day long in congress then go out and drink together at night.

Famously, President Ronald Reagan said to Tip, “Old buddy, that’s politics—after 6 o’clock we can be friends; but before 6, it’s politics.” But with Reagan gone, Newt changed all that.

After President Bill Clinton raised taxes to get out of the recession of 1992 Newt had his cudgel and he beat the Democrats over the head with it, winning the House back for the GOP in 1994 with his famous “Contract for America”—often referred to by opponents as the “Contract on America.”

Most famously Newt was behind the impeachment of Clinton because of his sexual liaison with Monica Lewinsky, the intern with the magical thong and dress. What people didn’t know at the time was that Newt was having his own affair. (Yes, the woman’s name began with a “C” and she wrote elephant books.)

Like a lot of pols caught with their hand in the nookie jar Newt turned to prayer: “There were times when I was praying and when I felt I was doing things that were wrong. But I was still doing them,” Gingrich confessed years later. The post-impeachment period went poorly for Nookie Newt. The GOP had a coup and Newt was out and Bob Livingston was in—almost. Well, it was discovered that Bob had also been sticking his quill in the government well with his own affair.

Two down, one to go. The GOP turned to avuncular Dennis Hastert to be the new Speaker. Hastert was the former wrestling coach they would name the “Hastert Rule” after. [The Hastert Rule is a foolish rule that bills could only be passed in the House with GOP votes, basically cutting the Democrats out of the process. It works until it doesn’t—like when the government is threatened with a shutdown. Stay tuned for a government shutdown showdown coming soon to a news network near you and watch the Hastert Rule implode.]

What they didn’t tell us, those GOP paradigms of family values is that the Hastert Rule was really about prepubescent boys and their private parts. Hastert was a high school wrestling coach who liked to wrestle with boys.

My only advice to parents when their 12-year-old kid comes home and says he wants to join the wrestling team is to buy him a trumpet and send him off to music class. It’s safer than getting rolled on the mat with the likes of Dennis Hastert. Coach Denny will soon be getting out of the can where he has been wrestling with his conscience for the last several years. The federal judge who sentenced Hastert called him a “serial child molester.”

Callista Louise Bisek was a nice Catholic girl from Wisconsin who came to Washington eager to help lubricate the wheels of government. Like Monica Lewinsky, she started out as an intern, working for GOP Representative Steve Gunderson. It was during this sojourn that she met Newt, who was 23-years her senior, in 1993. They immediately started a torrid affair while the Speaker was married to his second wife, Marianne.

It should be pointed out to Callista that she better keep her chin up and her eyes peeled when it comes to Newt and his marriages. His first wife, Jackie, was his high school Geometry teacher. I’m not joking. This is the stuff that made-for-TV movies are made of. It is believed that Newt aced the course and he married her in 1962. The marriage lasted 18-years before he tired of his starter-wife. While Jackie was battling cancer, he visited her in the hospital and asked for a divorce.

There are many variations of this story, none of them exculpatory. According to his former campaign treasurer L.H. Carter, Gingrich reportedly said of his first wife, “She’s not young enough or pretty enough to be the wife of the President. And besides, she has cancer.” You have to hand it to Newt, he always looking ahead—for himself.

Wasting no time, Newt moved on to the aforementioned Marianne. This too ended badly. It lasted from 1981 to 2000 with Callista serving as a bridge in the difficult years between 1993 and the divorce. It should be noted that Newt tires of his wives as he approaches the 20-year mark. Jackie lasted 18-years; Marianne 19. Callista is at 17 and counting.

Of course, Newt has taken full responsibility for his actions. “There’s no question at times in my life,” he told the Christian Broadcasting Network in 2011, “partially driven by how passionately I felt about this country, that I worked too hard and things happened in my life that were not appropriate.”

In other words, the good old USA made me an adulterer! I know Newt has a Ph.D. but I bet he has a BS degree too.

Annulment - Catholic divorce can be a politician’s best friend

“Therefore what God has joined together, let no one separate.”—Mark 10:9

Not so fast. If you believe that, I have this mint Yugo you might want to buy. The Church is rather prudish about granting annulments. It seems, however, that the combination of celebrity and money might just make it happen. USA Today had this amazing statistic: in 2012 of all the annulments granted by the Catholic Church in the world, 49% of them were in the United States.

Teddy Kennedy secured an annulment from his wife Joan after 23-years of marriage. Rudy Giuliani—one of Trump’s attack dogs has a lot in common with the Donald and Newt: he is a three-time winner in the marriage lottery—famously got an annulment after 14-years of marriage to his second cousin. And Callista and Newt are also on the annulment gravy train.

You actually need a marriage scorecard to keep track of Newt’s romantic liaisons. Concentrating on his relationship with Callista alone, here’s the quick chronological rundown:

- Finally converted to Catholicism in 2009

Newt waxed poetic about his newfound faith in an article called “Why I Became a Catholic”:

“I am often asked when I chose to become Catholic,” he wrote. “However, it is more truthful to say that over the course of several years I gradually became Catholic and then decided one day to accept the faith I had already come to embrace.

“My wife, Callista, is a lifelong Catholic and has been a member of the choir of the Basilica of the National Shrine of the Immaculate Conception in Washington, D.C., for 15 years. Although I was Southern Baptist, I had attended Mass with Callista every Sunday at the basilica to watch her sing with the choir…

“Throughout our travels, whether Callista and I were in Costa Rica or Africa, she was adamant about finding a local Mass on Sunday. Listening to ‘Amazing Grace’ being sung in Chinese at Mass in Beijing was a beautiful experience, and worshiping with believers across the world opened my eyes to the diversity and richness of the Catholic Church…

The Pope vs Trump

The Pope has been highly critical of President Trump and his policies. He has even intimated that Trump is “not Christian.”

“A person,” the Pope said, “who thinks only about building walls, wherever they may be, and not building bridges, is not Christian.” 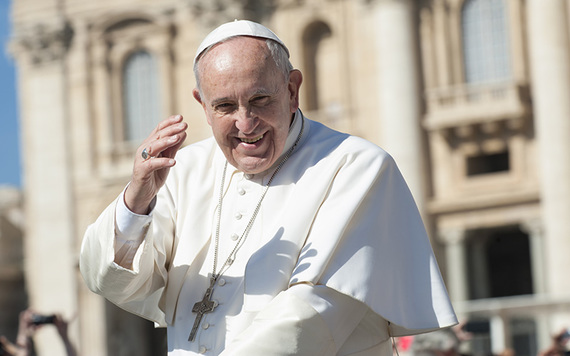 Callista Gingrich fully supports President Trump’s agenda, much of which has been attacked by the Pope. How will she make a difference at the Holy See?

She is not a diplomat; she is an author of children’s books with such anodyne titles as "Sweet Land of Liberty" and "Yankee Doodle Dandy"—and of course the "Ellis the Elephant" series. Her Catholic credentials include making two films about the church and singing in a choir. She admitted at her Senate confirmation hearing that she has only “looked at some of” the Pope’s encyclical on climate change that Trump is diametrically opposed to.

The Vatican ambassadorship is not a post that is largely ceremonial, such as being posted to Dublin. It is often a mediator and a back channel for diplomacy between known global rivals. Will Callista be up to the challenge? What will Newt’s role be? How will Newt’s frankly sleazy and hypocritical history play into this appointment and environment? This is not a position for an ideologue. It is a position that must have a balanced approach to the geopolitical realities of the world, not the twisted international fantasies of Donald J. Trump.

If this appointment of Callista Gingrich is Trump’s way of trolling a Pope he does not agree with on many things, he—and the rest of the world—may live to regret it.

As for Callista, she can bet that helmet head of perfectly coiffed blonde hair that Newt will still bear watching at the Vatican. Newton Leroy McPherson, to give him his birth name (his adoptive father was Gingrich), may be 74-years-old but skirt-chasing never goes out of style, although it can be hard to source females willing to have affairs at the Vatican, Callista no doubt will have figured that out.