“I am merely pointing out that these two presidents — one loved by liberals, the other loathed — have more in common than you may think.” 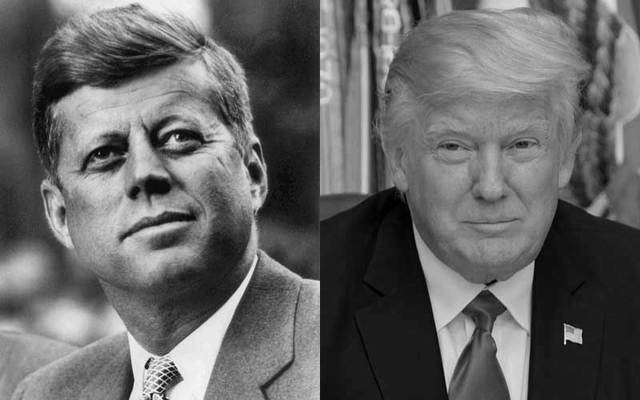 “I can reveal that the president is a serial philanderer who is compulsively unfaithful to his wife. He suffers from severe medical problems, which he and his staff are concealing from the press. One of his mistresses is also romantically involved with a notorious gangster,” wrote Niall Ferguson, in an opinion piece for the Boston Globe.

“Speaking of organized crime, I understand that his campaign, to get elected, called on the Mafia for assistance. He intends to appoint his brother to the key position of attorney general. They plan to wiretap human rights activists.

“In foreign policy, the story is even worse. He is planning an invasion of a hostile country, which is almost certain to fail disastrously. He has established a secret back-channel which he intends to use in times of crisis to communicate secretly with the Kremlin. Yet he is willing to risk nuclear war. And he has no objection to the assassination of political enemies and coups against allied governments.”

With these words, Ferguson describes JFK, not Trump and writes that he is “merely pointing out that these two presidents - one loved by liberals, the other loathed - have more in common than you think.”

He goes on to chronicle JFK’s extramarital affairs, alleged ties to the mafia, and his “combined callousness with recklessness” in foreign policy. Yet, Ferguson says, President Kennedy is remembered fondly by the American public.

He writes: “…the resemblances between the two presidents are more than merely superficial. The fortunes of the Kennedy and Trump families were made in a similarly disreputable ways. Kennedy and Trump alike used family members as political proxies. Thus far, however, Trump has done nothing to match the skullduggery and recklessness of his fondly remembered predecessor.”

He concludes, saying: “Perhaps, if Kennedy had been a Republican, he would have been treated with the same ferocious animosity that DJT is treated today, for acts much less heinous than those of JFK.”

Following the article’s appearance in the Boston Globe on July 17, readers of the newspaper wrote in expressing their outrage over the comparison.

“By offering credible, historical analogies to contemporary circumstances, independent historians have added significant value to Globe readers of this page through the years. Not so the opinions of Niall Ferguson in ‘Trump and Kennedy are more similar than you think.’

“That Ferguson’s shallow and partisan attempt to draw specious dots to connect President Kennedy’s legacy to Donald Trump’s launch was thought worthy of op-ed attention falls short of the paper’s laudable tradition, and it raises the question of the Globe’s current understanding of JFK’s admonitions that ‘truth . . . is the only tyrant to whom we can give our allegiance’ and, as worthy historians will agree, ‘wisdom requires the long view.’

Stanley Keller, of Needham, wrote that Ferguson’s “op-ed is an exercise in innuendo, inapt comparisons, and unfounded generalizations devoid of recognition of the broader context.”

Mitch Lyons, of Newton, said: “Pointing fingers at the media and searching history for other instances of misdeeds will not blind the people of Massachusetts to the abuses committed by the morally bankrupt president currently occupying the White House.”

Stephen Krensky, of Lexington, wrote in that “Niall Ferguson’s comparison of President Trump with JFK misses the larger point. It’s not that former presidents haven’t had foibles and flaws (Franklin Roosevelt hid his physical ailments from the public and George Washington owned slaves); it’s that we have raised the bar considerably over the years as to what is responsible behavior on a range of issues. We expect more and better from ourselves and our presidents than we did in times past, and it is according to this measure that Trump falls so woefully short.”