Although brought up in a Communist-supporting atheist family in Slovenia, the First Lady is now confirmed as a practicing Catholic. 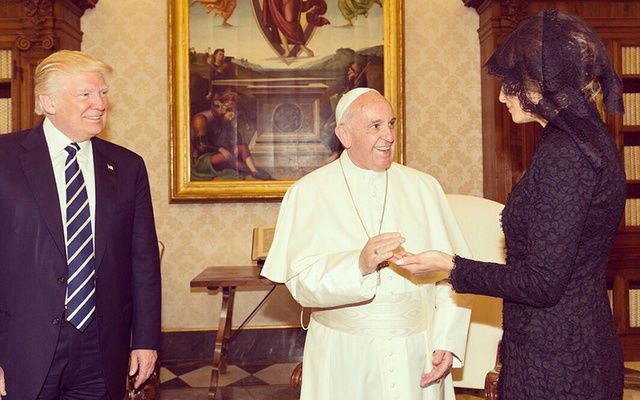 First Lady Melania Trump will soon become the first Catholic to reside in the White House since President John F. Kennedy was assassinated and his wife Jackie had to move out. The current First Lady has not yet relocated to Washington D.C. She is waiting for 10-year-old Baron Trump's school year to finish before joining the president at 1600 Pennsylvania Avenue.

While it is not publicly known when exactly Melania Trump became a Catholic – she had been brought up in a Communist-supporting family in Slovenia who gave the outward appearance, at least, of falling in line with Communist atheist beliefs –  a spokesperson for the First Lady confirmed to the Daily Mail shortly after her meeting with the Pope this week that she was a practicing Catholic.

Melania Trump had caused some speculation regarding her religion after she introduced her husband at a rally in Florida in February with the Lord’s Prayer.

The President himself is a Presbyterian and the couple married in an Episcopal Church in Florida in 2005. This would seem to suggest that her conversion to Catholicism may have happened at some point over the last 12 years.

Today's visit with His Holiness Pope Francis @Pontifex is one I'll never forget. I was humbled by the honor. Blessings to all. pic.twitter.com/NiomkFQqJb

On Wednesday, First Lady Melania Trump attended a Papal address along with her family, shortly before her spokesperson Stephanie Grisham confirmed her religion. Grisham failed to confirm the exact time of her conversion.

Melania is believed to have brought along a set of rosary beads for Pope Francis to bless and to have told him she was looking forward to visiting the “bambinos” in a Vatican-affiliated hospital later that day.

At Bambino Gesù (Baby Jesus) Hospital, the First Lady laid flowers at the feet of a statue of the Virgin Mary, before meeting with the children, and praying at the hospital chapel.

“To spend time speaking to and coloring with children who have such a positive spirit despite illness was an amazing gift,” she said.

“The time I spent with the little ones in the Intensive Care Unit is something I will never forget, and I will pray for each of them daily.”

Thank you @bambinogesu for the heroic work you do. I ask that everyone keep these amazing children in your thoughts & prayers. pic.twitter.com/UfVAc9lXv2

Although former Vice President Joe Biden is a Catholic and there has been a significant percentage of Catholic members of Congress, Melania Trump will be the first Catholic resident of the White House since the early 1960s.

Currently 70 million of the 321 million residents of the US are Catholic (about 22%) and the growing Latino and Hispanic communities are adding further to this.

While Catholics were once viewed with suspicion in America, especially in the southern states, this view has been fading in recent years.

“Not that long ago, the prospect of the head of the Catholic Church addressing Congress would have been unthinkable,” observed the New York Times when Pope Francis addressed the Joint Session of Congress in September 2015.

“Catholics in politics were a source of suspicion and a subject of slander for generations. Even as John F. Kennedy became the first Catholic elected president, he felt compelled to defend his faith by asserting that he would not take orders from the pope.”

While JFK broke down the barrier, no Catholic has since come close to reaching his achievement with only long-shot Martin O’Malley and Catholic convert Jeb Bush representing the Catholic faith in the 2016 presidential election. (Although, Marco Rubio was also once a Catholic.) Within Trump's current administration, Seán Spicer and Kelly-Anne Conway are among the most prominent Catholics.