President Donald Trump's administration bring kooky conspiracy-mongering to the masses and it's not even original. 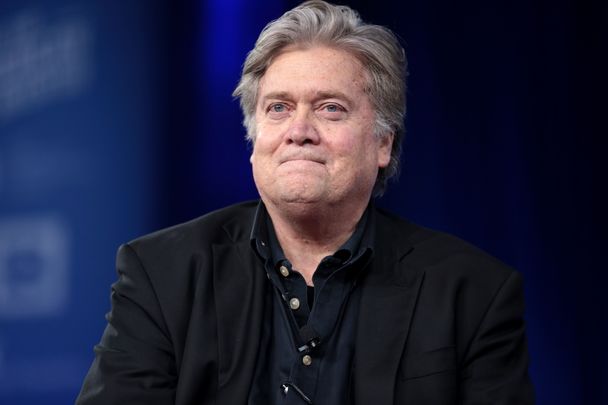 "Steve Bannon, who probably did more than any other individual to bring about this delinquent regime." Gage Skidmore / Flickr

Since the 1960s the folks on the other side of the aisle have whispered about the dirty deeds of those in power. In 2020, we're all deep staters.

A few weeks back, Declan Lynch wrote a column in The Irish Independent under the headline: “What’s With Irish Americans Passing the Buck for the Donald?”

Wrote Lynch, “From the start, the prevailing ethnic flavor of the Trump administration has been what we would in any other circumstances be pleased to describe as Irish American. Indeed even before it started in earnest there was Steve Bannon, who probably did more than any other individual to bring about this delinquent regime.”

Read more: Why some of my anti-Hillary friends are leaning towards Biden 2020

There’s much I’d quibble within Lynch’s column, but about Bannon he is spot on -- not to mention hilarious.

“Of all the Irish Americans who followed (Bannon) down that track, he seems the most ‘Irish’ in a certain way -- he looks like some broken-down academic you'd find wandering unhappily through St. Stephen's Green with a load of newspapers under his arm, waiting for Nesbitt's to open,” Lynch continues.

Bannon never misses an opportunity to tell interviewers he grew up in an Irish Catholic family that supported JFK-style Democrats. Until, of course, he formulated his many theories about predatory liberals and other “deep state” demons, which struck a chord with, like, half of America.

But if the past week teaches us anything about the United States of Trump-Bannon, it is the degree to which they have gleefully brought kooky conspiracy-mongering to the masses.

And so we have the president casually accusing Joe Scarborough, former congressman and TV host, of a murder from nearly two decades ago. Which is the kind of thing you’d expect to hear from a devotee of QAnon, a catch-all term for those who believe the deep state is pulling all the strings?

You know, weirdos like Trump and Bannon. And Jo Rae Perkins, a weirdo out in Oregon who managed to get about 170,000 other weirdos to vote for her.  Plenty enough to become the Republican nominee for the U.S. Senate race to be held this November.

This was also the week we found out that 44 percent of Republicans believe “Bill Gates is working on a coronavirus vaccine because he wants to plant a microchip in them and monitor their movements,” as the New York Daily News put it.

That is certainly worth a chuckle.  And the Daily News obliged, noting that it was high time to “Hold onto your tin foil hats.”

But two problems arise when we simply mock these tin foil deep staters. First, we minimize the fact that these people are actually getting lots of votes out there.

But more importantly, chuckling at deep staters -- or worse, righteously raging against them -- often requires a heaping dose of hypocrisy.

The sad truth is that Messrs. Trump and Bannon can be accused of many things. But originality is not one of them.  They are merely copycatting a conspiratorial approach to the world that many before them -- more often than not from the other side of the political aisle -- mastered long ago.

Since at least the 1960s, enlightened, progressive folks have spoken darkly of “those in power,” and their dirty deeds. Occasionally, there was even a hint of truth in these narratives about dastardly acts perpetrated by “the government.”

Which makes us, now, a nation filled with deep staters, all of whom know the dark secrets behind not just Gates’ vaccine, but also Barack Obama’s birthplace, the flatness of the earth, the fakeness of the moon landing, George W. Bush’s roll in 9/11, and the grassy knoll’s role in the JFK’s assassination.

Like many others nerds out there, I’ve taken this pandemic as an opportunity to read a brick of a book. In my case, it is Stephen King’s The Stand, an amazingly prescient, 1,300-page look at America crippled by a mass virus -- published over 40 years ago!

Now, I like a lot of King’s books. Better still, he regularly taunts the president on Twitter.

But about 200 pages into The Stand -- spoiler alert -- guess who emerges as the big bad guy?

King’s hat may not say MAGA. But it may well be made of tin foil.

Read more: 'Orange is the New Black' star Kate Mulgrew will move to Ireland if Donald Trump is re-elected