The staggering differences between Irish and US gun ownership

Americans must face reality: until gun ownership is strictly controlled mass shootings in supermarkets and schools will continue. Is there any serious reader who doubts this basic truth? 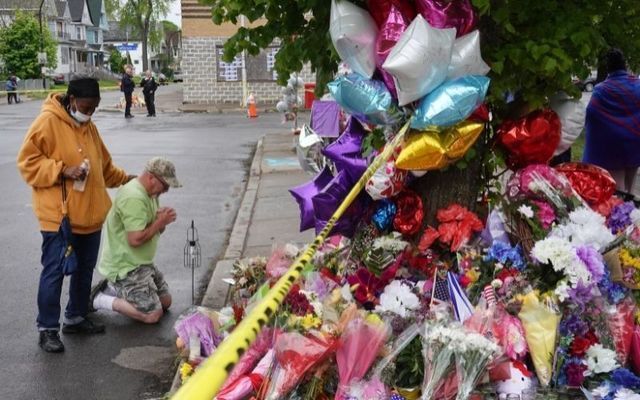 MAY 18: People visit a makeshift memorial set up outside the Tops supermarket on May 18, 2022, in Buffalo, New York. Getty

I have spent about half my life in the United States and the remainder in Ireland. From early on in New York, I was struck by the glaring differences between the two countries in the area of gun ownership.

In America there are more guns around than people; to be precise, every 100 residents possess, on average, 125 firearms. By comparison, in Ireland, the number of people owning a gun in the same proportion comes to just seven.

The historical context for this Irish number merits reflection. After the Anglo-Irish Treaty was approved in the Dublin parliament in January 1922, a strong minority who believed that the agreement was a sell-out took up arms in defiance of the new government, and a short but often savage civil war ensued.

To help deal with the crisis, the ruling cabinet set up the Special Infantry Corps (SIC), an armed group of about 4,000 men divided into eight battalions, to impose law and order in the new state. Apart from dealing with civil war disturbances, the SIC supported government pressure to end a spate of workers’ strikes, and they focused also on closing the plethora of illegal mountain distilleries that were cropping up all over the country. The SIC was disbanded in December of 1923, about six months after the civil war finished.

Interestingly, despite the daily emergencies facing the new Dublin regime, the police force they established, the gardaí, was not allowed to carry guns of any kind. They asserted their authority over miscreants by using a hefty disciplinary baton. Their immediate predecessors, the Royal Irish Constabulary (RIC), functioned as an armed force, as indeed did the post-partition Royal Ulster Constabulary (RUC) in Northern Ireland.

The new government wisely chose to follow the English bobby tradition of unarmed policing, so the gardaí were instructed to maintain order without resorting to firearms. Their record in doing so is rightly admired by Irish people everywhere, and their stress on unarmed community policing played a big part in removing the gun from Irish politics. Very few gardaí were killed in the century since Irish independence, and the toll of civilian deaths in dealing with the police also remains minuscule.

The American story is very different. Lawmen carrying guns are central to the American narrative since George Washington. And the easy availability of all kinds of firearms accounts for hundreds of deaths every week. Police officers all over the country are armed, and citizens expect them to use their weapons to impose order in the community.

The frontier mythology, still strong in many states, always involves men with guns asserting their authority as they moved west to develop mining and claim land for ranching.  William Cody, the man behind the Buffalo Bill glorification legend, developed a big show that traveled around the United States and Europe, drawing huge crowds for every presentation.

Cody never called it a show. For him and his audiences, the gunslingers were presented as heroic cowboys. Tough luck on the Indians who were pushed aside by superior weaponry.

Cody’s romanticizing of the American West spawned hundreds of stories of gunmen – good guys and bad – asserting holster power in all conflict situations. Hollywood perpetuated the largely made-up stories about bumpy stagecoaches, bat-wing saloon doors, and cattle barons always backed by a small army of gunmen. In this context, might and power nearly always trumped over right.

The famous showdown at the OK Corral in Tombstone remains a powerful symbol of those times. Ironically, from a contemporary perspective, many towns had ordinances requiring riders passing through to give up their guns for the duration of their stay.

A gang of five toughies, known as The Cowboys, refused to follow this protocol and were confronted by the Earp brothers, Virgil, Morgan and Wyatt, joined by the legendary Doc Holliday, killing three of them in the famous shootout.

Never mind that the gang leader sued the Earps, claiming that his men had raised their hands in legal compliance before the brothers opened fire. He lost the case but historians remain unsure about what really happened in Tombstone that day.

The glorification of firearms remains central to the American story. Many Western movies and popular video games where the hero uses his automatic weapon to waste all around him point to a deep and unfortunate culture of guns, violence and brutality.

The Uvalde massacre of 19 fourth graders and two teachers, who valiantly tried to protect their charges, has elicited a deep revulsion among people everywhere. The line from the Irish ballad catches the general mood, “a raging cry went up to very heaven.”

Imagine the feelings of those 10-year-olds as a boy-man came into their classroom using a legally owned semi-automatic rifle and mowed them down, decapitating some children, without any semblance of mercy.

This brutal slaughter of innocents was not a singular event. Within nine days there were 20 more mass shootings, which is defined by the FBI as an event resulting in the death or injury of at least four people. A grim perspective points to the fact that the Tombstone showdown wouldn’t qualify for inclusion by today’s measurement.

Senator Chris Murphy from Connecticut has assembled a bi-partisan group to try to reach a gun-control agreement that would pass the Senate. The Democratic House, led by Nancy Pelosi, ensures passage of any progressive gun control legislation in their bailiwick.

However, at least 10 Republican senators will have to get behind a bill in the upper house. Already off the table because of a Republican veto of the idea of raising the age to purchase semi-automatic weapons from 18 to 21.

No doubting Murphy’s sincerity, but the system is rigged because the National Rifle Association has an effective veto over any proposal. Opponents of change suggest hiring more mental health workers which might have some impact on the margins but would be unworkable in any large community.

Another conservative “solution” proposes arming teachers which is equally ludicrous. Think of a teacher with a pistol in his drawer dealing with an intruder carrying an AR-15-style semi-automatic rifle.

Americans must face reality: until gun ownership is strictly controlled mass shootings in supermarkets and schools will continue. Is there any serious reader who doubts this basic truth?

Every firearm should be registered and every owner must have a license to use one. About three hours of professional training in gun use must be completed before the person gets legal possession of a deadly weapon.

Unfortunately, legislating for these common-sense provisions for gun ownership in America remains a pipe dream.  We have a long way to go. Sadly, school massacres will continue.