President Trump gets no credit for disrupting a failed system

Barely 10 months in the White House and The Donald is scoring policy success in three main areas. 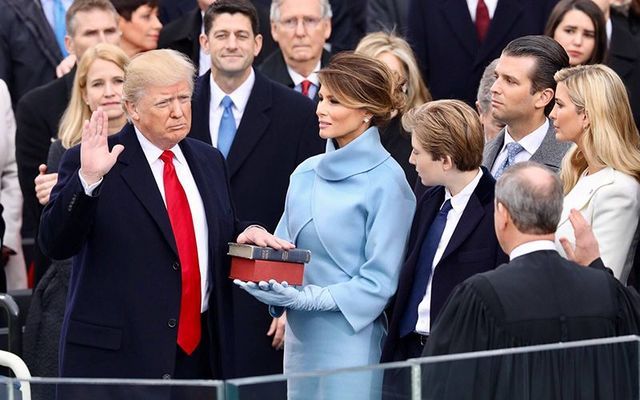 One year ago today, the inauguration of Donald J. Trump as the 45th President of the United States.

President Donald Trump is a disrupter. He is to America’s political system what hurricanes are to the Caribbean. Nature invented hurricanes for a reason. It is Nature’s way of stirring things up. And, in Washington DC he is sure stirring things up a year into his term.

To the casual observer of American politics (at least those not of hard ideological bent) there was little doubt that change was needed. For sure, 2016 was a change year. For those of us who share a conservative political viewpoint, the General Election one year ago was shaping up to be a conservative car-wreck.

One year on, if you care to meander through YouTube video compilations of pre-election predictions of the television pundit class, it is a quite satisfying experience. Plus, of course it was great fun to observe the on-air broadcast meltdowns on election night of the liberal elite media mavens as they saw their grand liberal dream turn unexpectedly nightmarish. Oh, no! Not him. Not Donald Trump. Bigot. Racist. Misogynist. Narcissist. Vile thing. It simply cannot be.

And yet, barely 10 months in office, how is our President doing? Forget the tweets (although they are hard to ignore and are usually unhelpful and not very wise). Forget the outbursts of candid opinion, especially on topics before the courts or sensitive international relations matters. Forget the un-Presidential, childish, mine-is-bigger-than-yours taunting tweetstorms.

Let’s look at the big picture. Here is the big view. If this President can score policy successes in three areas he will be judged successful.

Taxes and regulation are clearly in his sights. Putting a stop to the Obama-gallop of Regulation Nation has already begun and it is looking like it is already having a positive impact on economic growth and performance. Lots of work has yet to be done here but the signs are that it is looking like a success so far.

This is an issue rooted in the ideological divide between left and right. President Barack Obama did not have a single clue about how businesses operate. He never had to make a payroll. He never worked in a business (“community organizer”) and so, sadly, he did not fully comprehend how damaging his various regulatory diktats could be. He knew if businesses did not like what he was imposing, they would just have to adapt – just like they have to adapt when market forces throw them a curve-ball.

The evidence shows that the mounting burden of the regulatory over-reach in everything from finance to environmental rules built up during the eight years of Obama had a seriously dampening effect on economic performance. For an economy this size, it matters a lot not a little that America’s economic output grows by 2% instead of say 3% or 4%. It is a difference that over time can mean millions of job and trillions of dollars in tax revenues. During the Obama years, economic growth never got out of the basement – the worst post-recession recovery performance on record.

On taxes it is too early to say what will happen. However, without sticking our necks out too far, it is clear that the tax burden on working Americans is likely to be lowered not increased. It is also clear that there is a better chance that corporate taxes will be lowered – thus making American business more competitive.

If nothing else, the Trump Presidency has underlined one fundamental truth that the Democrats rarely appear to get – Government does not create wealth – it only consumes wealth. Any economic policy that puts Government at the center of things, as the current Democratic Party platform does, is destined to fail. Evidentiary proof – see Cuba, Venezuela and lots more besides.

Throw in some added economic growth through a success in infrastructure spending and President Trump will be facing the electorate in three years with a booming economy to show for his efforts.

Say what you will about his style in dealing with the thugs of the world, but make no mistake many of the world’s schoolyard bullies are running scared these days. Maybe it’s because they are afraid that they are up against an even bigger bully than themselves. Or maybe they think Trump is crazy. Whatever. America is no longer the patsy among America’s enemies around the world.

For sure, gone are the days when America’s credibility went down almost as fast as Hillary Clinton’s Frequent Flier Miles went up. Dealing from positions of strength always works better against the Bad Guys.

Trigger warning for liberal, coastal snowflakes – cover your ears, your safe spaces may be compromised for the next paragraph or two. We have all read the children’s fable of "The Emperor’s New Clothes." Well, the PC police have been regulating what is appropriate to say for so long that most people in America had just had enough. Along came Candidate Donald Trump and he said what nearly everyone in America already knew and believed – Islam is a seriously dangerous and violent religion for non-Muslims. Turns out it is also quite deadly for Muslims too.

A very significant minority of the world’s Muslims believe it is acceptable to kill those who say bad things about their Prophet. We are not talking a few thousand people here. We are talking about hundreds of millions of our fellow-humans who approve of this dangerous and ugly concept. The Emperor has no clothes!

When Candidate Trump said that it was time to halt Muslim immigration into America, he upset the world’s PC crowd. But, he struck a chord with fair-minded Americans who tell it like it is. When he said that he would build a wall with Mexico to seriously deal with the uncontrolled flow of illegal migrants (and drugs), he struck a chord with American voters. Note he never proposed building a wall on the border with Canada! And, whether the liberal PC brigade like it or not, walls do work.

Finally, I hail from that part of the tax-paying public who would rather see a do-nothing Congress than a Congress busy passing all sorts of new laws. For all of 241 years, the representatives of the American people have been hard at work passing this law and that. If America’s book of laws fell on your head from a small height, say your prayers – you’re dead – it’s a seriously heavy tome! They never repeal any laws. They just pass new ones (they even exempt themselves from some of the nastier ones). So, I say America has enough laws. If President Trump and the U.S. Congress gridlocks in Washington DC, look on the bright side – fewer laws to have to worry about complying with!