Irish Stand will be held in Liberty Hall, Dublin, in support of those individuals currently living in the Direct Provision system. 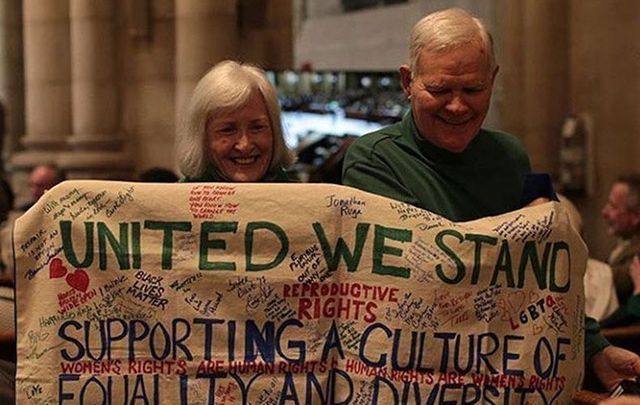 Panti Bliss and Frances Black will join Irish Stand Dublin in a night of resistance marking the first anniversary of President Trump’s election.

The first anniversary of the election of President Donald Trump is to be marked this Wednesday, November 8, in Dublin, in what is being dubbed by organizers as a “night of resistance.”

To be held in association with the Irish Refugee Council and their projects working with young people in Ireland’s Direct Provision system, Irish Stand is the second event of its kind to be held by the grassroots movement which supports civil rights protections for all immigrants.

Last St. Patrick’s Day 2017 in New York, over 1,500 people gathered in the Riverside Church in Manhattan to take an “Irish Stand” against the anti-immigrant rhetoric pushed by the many Irish Americans within Trump’s administration. Raising $20,000 for the ACLU, the large rally featured names such as journalist Joy Ann Reid, comedian Maeve Higgins, Irish writer Colum McCann, among many other artists and activists standing in solidarity with immigrants of all nationalities in the US.

“If this last year has dismayed and horrified you, here is a place to put your outrage and stand for equality in Ireland,” said co-organizer, Irish Senator Aodhán Ó Ríordáin.

Terry McGovern from the NYCLU speaking at the New York Irish Stand event in March. She will be joining Irish Stand Dublin on November 8. Image credit: Bryan Moore.

“We seek to reclaim the immigrant story of the Irish in support of the Irish Refugee Council's Direct Provision projects, working with youth who have spent much of their childhood in this limbo state.”

Direct Provision is a much criticized system in Ireland that provides the basic needs of food and shelter to asylum seekers while their applications for asylum are processed. Established in 2000, those within the system are not allowed to work or receive social welfare payments but are housed in government-established bases around the country and awarded a weekly allowance of €21.60 on which to survive.

These families' lives remain in limbo, housed in small spaces for years on end in conditions that are damaging to their health, welfare, and life-chances.

Irish Stand will take place this Wednesday, November 8, in Liberty Hall, Dublin, at 7 pm with tickets priced at €21.60, the same amount an asylum seeker in Ireland is given on a weekly basis. All proceeds will go to the Irish Refugee Council. Tickets and further information can be found here.