The history of pejoratives for the Irish is colorful—and racist. 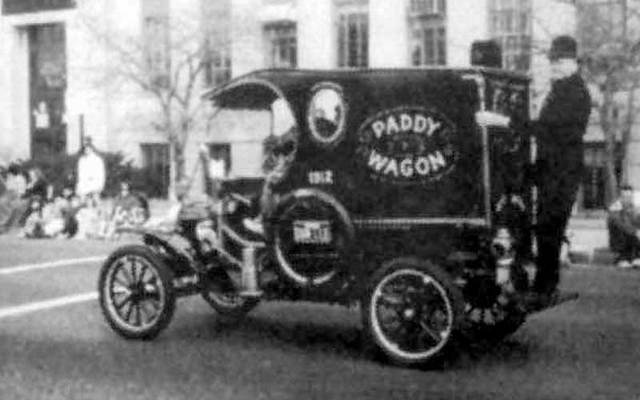 Black-and-white photo of a policeman standing on the back of vehicle, which has the words "Paddy Wagon." Irish Echo

Gee whiz, what can you say?

In a week that has been a complete disaster for his administration, President Donald J. Trump just put the cherry on top of the sundae that told the world he doesn’t have a clue what governing is about.

For all those Irish-American Trumpsters out there who love the Donald, he just obliviously dropped one of the greatest American Irish epithets—“Paddy Wagon”—without blinking an eyelash. On Long Island, with his pal, Irish Congressman Peter King in attendance, he went for the law and order vote talking about MS-13, the notorious international criminal gang, in front of law enforcement officers. Now, I don’t know what the DNA of some of those cops was, but I bet there might be a little Celtic blood flowing there.

Without further ado, I give you the President of the United States of America: “And when you see these towns, and when you see these thugs being thrown into the back of a paddy wagon—you just see them thrown in, rough, and I said, ‘Please don’t be too nice.’ Like when you guys put somebody in the car and you’re protecting their head—the way you put the hand over, like don’t hit their head, and they’ve just killed somebody. Don’t hit their head. I said, ‘You can take the hand away, okay?’ ”

A Colorful History of Irish Epithets

The term “Paddy Wagon” goes back to the 19th century when Irish immigrants, refugees from the Great Famine, flooded the cities of the northeastern U.S. The rowdy, hated Catholic Irish, as the poor frequently do, liked to steal, drink and fight. This behavior usually caused them to be arrested and carted away in Black Marias. Soon the Marias had a new name—Paddy Wagons!

The history of pejoratives for the Irish is colorful—and racist. There were all kinds of epithets aimed at the Irish.

Former Newsday journalist and college lecturer Jim Mulvaney let the New York Times know in 2015 when they used the term in their crossword puzzle that they had slighted the Irish.

“While some etymologists claim the phrase relates to a time when New York police were predominantly Irish - and therefore the drivers of the horse drawn police vehicles - the more widely accepted understanding is that the prisoner vans were used to round up Irishmen from street corners.

It was implied they were likely criminals, certainly drunks. I personally found myself in the back of such a van while working as a journalist in the mid-1980s along the Falls Road in Belfast. It was rare at that time for anyone other than a "paddy”—the local derogatory phrase for a Catholic—to be placed in such a vehicle.

In [a] 1992 story in the New York Times, Rev. Calvin O. Butts 3d, pastor of the Abyssinian Baptist Church in Harlem, is quoted apologizing for an earlier use of the phrase "paddy wagon" as calling it "a slur against the Irish."

Nice job Mulvaney; There were other slurs too. One of the favorites was referring to them as “Harps,” obviously after the national musical instrument of Ireland—today it is the official symbol of both the Irish government and the Guinness Brewery. (In fact, Irish-American novelist John Gregory Dunne wrote a wonderful book about his family and he called it Harps.)

First names were also great fodder. The Irishman was a “Mick” (short for Michael), or “Paddy” (Patrick), the origin for Paddy Wagon. Still today, whenever I hear Paddy Wagon, I take it as a badge of honor, thinking how hard the Irish had worked for that degenerate sobriquet.

Trump just told police officers that they can be more violent than they already are. And they cheered. pic.twitter.com/KjYI3pxcVG

Apparently, the Irish need to fight had a lot to do with some of their nicknames. (Cartoonist Thomas Nast would make a career out of portraying fighting micks.) “Hooligan” was taken from an Irish surname because of the rowdiness of said Irish family. I remember as a child New York Mets Hall of Fame broadcaster Bob Murphy referring to a fight on the ball field as a “Pier 17 Donnybrook,” obviously named after the Dublin suburb where they must have had a few interesting Saturday nights.

Of course, the Protestants of Northern Ireland also had their terms of endearment for their Catholic minority neighbors. “Taig” is a derogatory term which connects nationalistic instincts to its Catholic target. Like “Mick” and “Paddy,” it derives from “Tadhg,” the Irish for Timothy.

The Black North has also given us “RCs”—for “Rat Catchers,” a not so subtle code for Roman Catholics. RCs then morphed to “Terriers” because said breed were thought to be the best rat catchers in contests held in the holds of grain ships in Belfast Lough.

So, hats off, Mr. President. I want to congratulate you on putting the Irish, again, in their place. Somehow, you have managed to unite the Irish and MS-13 in lawlessness, 150-years apart. You have found your inner Thomas Nast without even trying. As an Irishman, I feel kind of elated the way you have defined us. I guess we’re right up there with the raping Mexicans, the terrorists Muslims, and those terrible LGBTQ folks who recklessly want to defend this country in the military—something you were too cowardly to do when you had your chance. I know you had a sore foot, but I’m just saying.

You know about the Irish and grudges, don’t you? Well, it’s true. We’ll remember come 2020—if you’re still in the White House then.