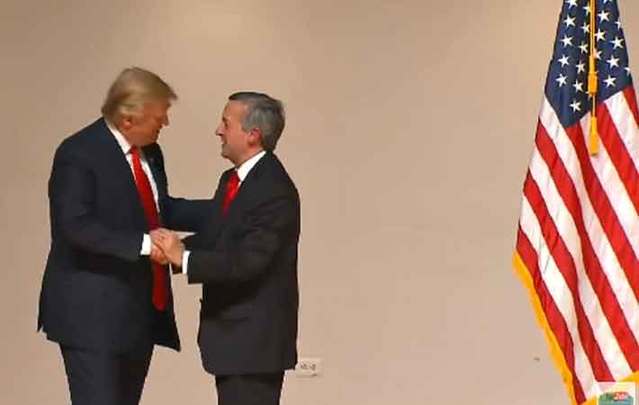 An evangelical anti-Catholic and President Donald Trump supporter says Catholicism is a “cult-like pagan religion” and the religion’s spread is due to “the genius of Satan."

Trump’s “wonderful man,” has saved his worst hatred for Catholics. Rightwingwatch.org has an amazing transcript of Jeffress' thoughts on Catholicism:

“This is the Babylonian mystery religion that spread like a cult throughout the entire world. The high priests of that fake religion, that false religion, the high priests of that religion would wear crowns that resemble the heads of fish, that was in order to worship the fish god Dagon, and on those crowns were written the words, ‘Keeper of the Bridge,’ the bridge between Satan and man.

“You can see where we’re going with this. It is that Babylonian mystery religion that infected the early church, one of the churches it infected was the church of Pergamos, which is one of the recipients of the Book of Revelation. And the early church was corrupted by this Babylonian mystery religion, and today the Roman Catholic Church is the result of that corruption.

“Much of what you see in the Catholic Church today doesn’t come from God’s Word, it comes from that cult-like, pagan religion

“And that’s what Satan does with counterfeit religion. He uses, he steals, he appropriates all of the symbols of true biblical Christianity, and he changes it just enough in order to cause people to miss eternal life.”

Most of this anti-Catholic jeremiad comes across as being from someone who himself is unhinged with bigotry or in Jeffress’ own words “a wacko.”

So, it may be news to all those Catholics who voted for Trump in 2016 by a 52-45 margin (white Catholics went all out for Trump 60-37) that their president is pals with a religious bigot who thinks that their religion is a “counterfeit religion.”

Next time you’re in your Catholic Church of choice, perhaps you should remember Galatians, 6:7: “As you sow, so shall you reap.”

Or, as they say at the Pottery Barn, “You broke it, you bought it.” You own Donald J. Trump, anti-Catholic President of the United States of America.