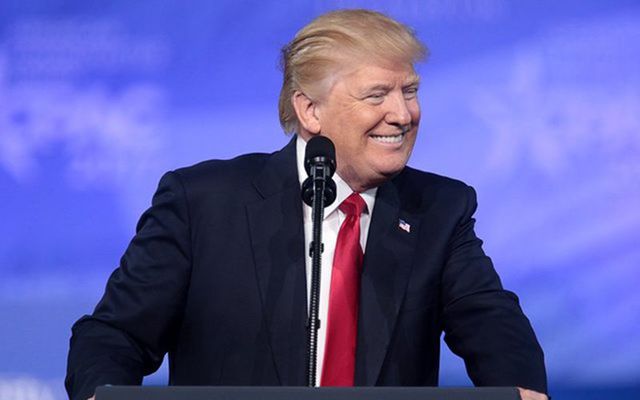 How did it come to this? A self-absorbed president denying climate change, threatening nuclear war, striking fear everywhere one year after his election.

As I look across the seas from Ireland I see a lady standing at the entrance to New York with tears streaming down her eyes. In her hand she carries a torch whose flames are flickering out. As her tears fall to the ground they are obliterating words at the base of her statue which read: “give me your poor, your huddled masses”.

How did it come to this? In a sense the Irish could be asked to share part of the blame. For one of the worst episodes in 20th century American history was the McCarthyite era, a blot on the generally proud evolution of the Irish contribution to American history.

But under the tutelage of an evil genius called Roy Cohn he acquired an army of believers and did untold damage to careers before he was disgraced and overthrown. Cohn was a master of the black arts of smear and lie. As a prosecutor in the Rosenberg espionage trials he persuaded David Greenglass to lie about his sister Ethel and so caused her execution.

His tactic was to attack, attack and then attack some more. Moving on to the next shibboleth before the last one caught up with him and always keeping his name in the papers.

Cohn used the same tactics in training the next Big Bombast to emulate McCarthy, to  threaten Americans cherished traditions of free speech and democracy. For decades he was Trump’s right arm. More accurately perhaps his right ear because, as he boasted, Trump frequently rang him as much as twenty to 30 times a day, seeking advice as he climbed the property ladder. Columnists who questioned Trump’s questionable business practices and inflated share prices were fired after Cohn threatened multi-million-dollar suits on their bosses.

It didn’t matter that subsequently, the criticisms proved to be correct and the claims for his casino’s profitability were false and the business subsequently folded. By then Trump had moved on and was generating fresh publicity and fresh millions with other dubious ventures.

Read more: President Trump gets no credit for disrupting a failed system

All this was repellent and low cut from the cloth of the robber barons, Harvey Weinstein and the casting couch but that’s all it was. Behavior at the level of the Mafia’s: “It’s only business”. Now, thanks to the Roy Cohns and the Roger Stones this self-absorbed psychopath is in the White House playing with the future of the planet.

In hock to the fossil fuel lobby, he says he doesn’t believe in climate change. But he does believe in gambling in high stake nuclear poker games. I am old enough to remember vividly the terror of the Cuban Missile Crisis as Armageddon loomed but then John and Bobby Kennedy were in the White House, ears were closed to the prompting of the Industrial Military Complex.

Nikita Khrushchev thought of his grandchildren. Conflict was avoided and the world breathed a sigh of relief. It seemed that mankind had learned the lesson that the survival of the species and nuclear warfare were incompatible.

“Not so” says Donald Trump. “I have learnt nothing except what Roy Cohn taught me and what I picked up in the sewers of Wall St.”

He wantonly forgets the warning of another Republican President General Dwight Eisenhower, who said that the greatest threat to world peace was the industrial military complex of America. But then Eisenhower, unlike Trump, was a distinguished warrior who had led the overthrow of a brutal regime of lies and dictatorship.

Doing what he promised?

Let it be remembered also by those who say that Trump is merely doing what he promised his base during the presidential election campaign that the man whose regime Eisenhower toppled, Adolf Hitler was also democratically elected and in return used his mandate to destroy the famously democratic Weimar Republic and lead his people to the most appalling deeds and disasters is history.

Trump’s doctrine is: “I will spend more on nuclear weapons, I will use North Korea, Iran and the South China Sea to gouge money from the American taxpayers for more bombs, more planes, more $15 billion Aircraft Carriers that are obsolete before they even get wet.”

"What we don’t often hear… is that the US has sent 3 nuclear aircraft carriers to be docked on the Korean Peninsula" https://t.co/SLYrhYuE74

“All this I will do while cutting health care for the poor, the huddled masses, destroying the hopes of their children and rebuilding a Berlin Wall along the Mexican Border.”

Trump has gained power, with the support of America’s enemies, the Russians, by following the dictum of his favorite political mentor – apart from Roy Cohn and Roger Stone– the character in 'Alice in Wonderland' who said: “Words mean exactly what I choose them to mean”.

Appropriately enough that character was Humpty Dumpty who had a great fall and not all the king’s spin doctors could put him together again. But for the moment Trump spins on crying: “Fake news, fake views”. These cries have served him well and as he approaches the end of his first year in office it seems that he intends to use them more and more into the future unless and, hopefully, until, someone, be it Bob Mueller or his own Party, uses a phrase that helped to bring him to power: “You're Fired”.

* Tim Pat Coogan is an Irish journalist, broadcaster and newspaper columnist. He is best-known for his books, such The IRA, Ireland Since the Rising, On the Blanket, and biographies of Michael Collins and Éamon de Valera.