The recent violence in Northern Ireland has triggered a subtle shift in perspective regarding the possibility of a United Ireland. 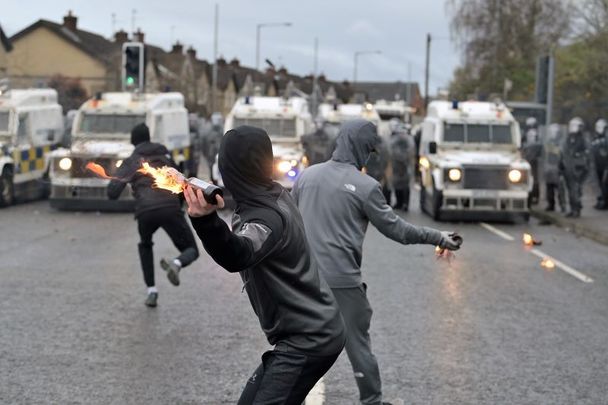 April 8, 2021: Disorder on the Springfield Road just up from Peace Wall interface gates which divide the nationalist and loyalist communities in Belfast, Northern Ireland. Getty Images

Every night of rioting and violence in the North last week was another nail in the coffin of the campaign for a united Ireland.

*Editor's Note: This column first appeared in the April 14 edition of the Irish Voice newspaper, sister publication to IrishCentral.

Every car set ablaze, every petrol bomb thrown, every attack on a police vehicle, all the mayhem night after night confirmed in the minds of many people in the south that it would be mad for us to take the North on. People here looked at the news in horror and their reaction was all over social media.

Why does this matter? Because it's not just in the North that a majority will be required to make a united Ireland happen. That's where the main focus has been in all the talk about a border poll, about the demographics showing the Unionists losing their majority, about the "inevitability" of a united Ireland because of Brexit.

The easy-to-forget reality, however, is that it's not just about having a vote in the North. There also has to be a vote in the south and a majority of people here would have to vote in favor of a United Ireland.

Too often that has been taken for granted. But after the scenes we saw in Belfast and other places in the North last week that is now much less certain. People here have had a rude awakening.

Why would we want to take such a risk? What's in it for us? The romantic idea of reuniting the country still has a powerful nostalgic appeal. But there is a growing awareness of the far less romantic reality of what could be involved.

Last week's events crystallized that in the minds of many people here. For them, it's now very much a case of be careful what you wish for.

This shift in attitude may be subtle, but it was definitely detectable here last week as people reacted to what they were watching on TV every night. It was a mixture of disgust and disappointment, a feeling that despite all the talk of progress the North is still the same, with the potential for violence and mayhem lurking just below the surface.

The benign narrative that has been fostered here in recent months seems far less convincing after last week. This suggested that the transition to a united Ireland could be peaceful, that eventually unionists would come around, they would realize they have been betrayed by Boris Johnson and they would see that their best interests now lie in joining the south. It would be difficult and it would involve a lot of changes for us down here, but it could be done if there was respect and generosity on our side.

The most frequently heard concern in this scenario was whether we could afford it, whether we could pick up the €12 billion a year tab for the North currently being paid by Britain. There were also concerns expressed about security, but these tended to be played down.

The argument was that it would be manageable if we could bring the bulk of moderate unionists on board. And we could do that by showing them that as well as offering a better economic future, we would be willing to reshape Ireland to accommodate them.

What the past week has done is blow the cold air of reality through that warm wishful thinking.

Whether we could afford it or not is no longer the main issue. Foremost in the minds of people in the south now is security, the fear of what could happen not just in the North but also in the south if a united Ireland is forced on unionists after an early border poll.

The loyalist fury last week was shocking. What was also very disturbing was the confrontations between gangs of youths from both sides of the sectarian divide at some of the peace walls in Belfast.

Like the attacks on the police, this was instigated loyalist gangs, with petrol bombs being lobbed over peace walls at groups of nationalist youths on the other side. But the youths in nationalist enclaves seemed ready and eager to take them on, and to riot and attack the police as well.

It's now 23 years since the Good Friday Agreement came into being -- the anniversary was last Saturday -- so most of these rioters were not even born at the time. They have grown up in peace, yet the naked hatred and extreme violence they were showing for the police and the opposite side last week was terrifying.

In recent years the peace walls and the murals of gunmen on gable walls have become a tourist attraction in the North. All that was over, we were told.

Now we know it's not. The sectarianism has been there all the time, festering away just below the surface. As we pointed out in this column just a few weeks ago, the North is as divided as ever.

Yes, the years of peace have brought some progress. There has been more integration across better-off areas. Belfast city center is vibrant and multi-cultural.

But it's very different in working-class areas, which are either unionist or nationalist, often side by side. These communities still live apart, with minimal interaction and only a fragile tolerance.

What does all this mean? The 23 years since the Good Friday Agreement have been a failure, at all levels.

There may be a power-sharing Executive -- apart from the times it collapses -- but the frosty enmity between the two sides in the administration is as bad as ever. And it's the same on the streets.

Millions and millions have been poured into communities on both sides to try to build a new society that is respectful and integrated. Some of this cash has gone to pay the wages of "community activists" -- former gunmen -- who use the funds to feed the old narratives and keep control of their areas.

Rather than building tolerance and encouraging opposing communities to live together in friendship, this has preserved the yawning gap between them. The almost complete failure to introduce integrated schooling in the North has not helped.

The stagnation in the loyalist working-class areas is a big factor in what happened last week. Poor education levels, lack of jobs and opportunity, the feeling of losing status and being abandoned, all these were involved -- as well as lockdown boredom.

Most of the teenagers who were rioting don't know much about the intricacies of Brexit or why the protocol was agreed. But they and their communities do understand what a border down the Irish Sea is, and they believe it is cutting off Northern Ireland from the rest of the U.K. And they do understand when their parents and community leaders tell them that this shows that Sinn Féin is winning and that loyalists are being ignored and forgotten.

If they want an example of how nationalists are winning, there is the way Sinn Féin flouted the Covid rules to hold a mass funeral for the IRA gunman Bobby Storey -- and got away with it. One law for everyone else but not for Sinn Féin because the authorities are afraid of confronting them.

That's how loyalists see it. And on top of all that there is the campaign for a border poll and the possibility of being pushed into a united Ireland.

As loyalists see it, the border down the Irish Sea is partition in the U.K., something we in the Republic should understand. They see this as a fight for their right to remain British, to keep their culture and traditions, their way of life.

It goes to the core of who they are and that is why they exploded in frustration last week. It may have been unexpected. But we should have seen it coming.

There was a tendency here last week to search for other explanations.  It was claimed that a lot of the trouble was being orchestrated by loyalist drug gangs who don't want their shipments from the U.K. to be disrupted by checks at the ports, and that could well be a factor. There was also the claim that it was just teenagers who are out of control and don't understand what they are doing.

But this is to ignore the wider concerns among loyalists and even moderate unionists. It's true that the Democratic Unionist Party supported Brexit and that the Northern Ireland Protocol is an unforeseen consequence of that. But it's not much use us saying they now have to suck it up.

The reality is that it took them and their supporters some time to understand what was involved.  Before and after doing the Brexit deal, Johnson was telling them not to worry about a border in the Irish Sea. And then he let them down and decided to implement one.

The horror being expressed here last week at the outbreak of violence in the North is a bit hollow in one way. The reason there could not be a land border in Ireland, we told everyone, was because of the threat of republican violence, the danger of starting up the war in the North again. The then Taoiseach Leo Varadkar even went to an EU meeting with pictures of bombings during The Troubles to show them what was at stake.

So we got our way thanks to the threat of violence. Instead of a land border, the solution became a border down the Irish Sea.

Now the loyalists are using the same tactic, the threat of violence, to get rid of it. From their perspective there is no difference and they see our horror as hypocrisy.

At some point -- the sooner the better -- the EU will have to intervene in this mess to soften the impact of the protocol or get rid of it altogether. Checks on goods moving between Britain and the North will need to be minimal or abandoned. Another way of protecting the Single Market will have to be found.

Perhaps the answer lies in a combination of very minimal spot-checking both at ports in the North and on land in Ireland. It's not something we want, but it's a price we may have to pay to stay in the Single Market and to preserve peace in the North.