"This is criminal exploitation," Northern Ireland's Children's Commissioner Koulla Yiasouma said regarding the recent violence in the region. 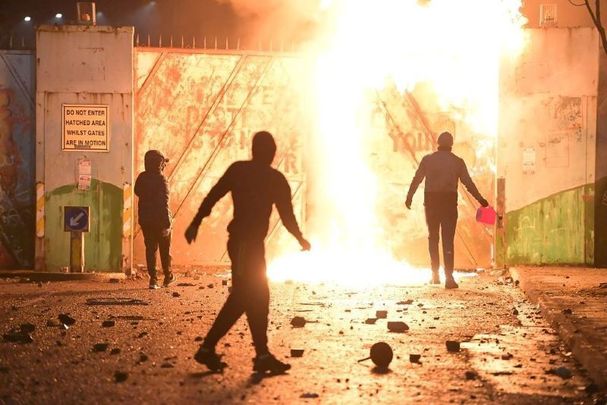 Young children are being coerced into rioting in Northern Ireland by criminal gangs, a leading child protection expert has warned.

Northern Ireland has been hitting the headlines across the globe for the past two weeks following eruptions of what has been described as the worst violence seen across the region in years.

Hate-filled protests have been taking place across the North since late last month involving young people from deprived loyalist areas hurling bricks, petrol bombs, and fireworks at police officers, at least 55 of who have been injured to date.

Kids as young as 12 are believed to have participated in some of the recent riots, prompting Northern Ireland's Children's Commissioner Koulla Yiasouma to call for the adults forcing the children to riot to be held accountable.

In an interview with BBC Radio, she said, "This is criminal exploitation and coercion by adults of vulnerable and at-risk children and young people, and those adults have to be held accountable and stopped."

When asked if it amounted to abuse of minors, she replied, "Child abuse is a very loaded term, but I think it is within that safeguarding family of abuses children may suffer and experience.

"When it comes to safeguarding issues, I would put in that group, yes."

She added, "Enough is enough when the first petrol bomb or stone is thrown. It's criminal actors trying to take control, and what we need is a calm narrative from our politicians.

"We need them to be seen, to be supporting our community workers on the ground.  These young people are still there. They're still living in our segregated community.

"It shows how fragile some of the communities are and that is in spite of the fantastic work people are doing and over 20 years of relative peace."

Meanwhile, former president of Ireland Mary McAleese has told of her concerns over the escalating violence.

The Belfast-born ex-president said she believed youngsters in the North were still "being taught to hate.”

She said, "It's very familiar territory. Regrettably, it arises because they're in a vacuum, and there is undoubtedly a vacuum of the leadership."

She added, "There is bound to be the consequences of Brexit, which, if we go back to Brexit, we realize how little consideration was given in the planning of Brexit and the referendum, of the impact that would have in Northern Ireland.

"You're also dealing with young people, regrettably, who are still being taught to hate and who are bringing that hatred and expressing it out on the streets.

The nightly cycle of violence across the region will be top of the agenda on Wednesday of this week when Ireland's Minister for Foreign Affairs Simon Coveney travels to London for a series of meetings on Northern Ireland with senior British politicians.

As well as discussing the recent upsurge of violence across the province, the talks will also focus on the implementation of the Northern Ireland Protocol.