The South Belfast UPRG and the Loyalist Communities Council are calling for an end to recent violence in Northern Ireland. 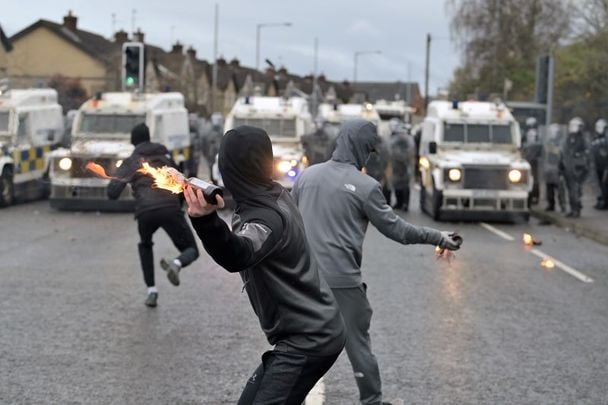 April 8, 2021: Disorder on the Springfield Road just up from Peace Wall interface gates which divide the nationalist and loyalist communities in Belfast, Northern Ireland. Getty Images

Since last week, areas in Northern Ireland have been grappling with the unrest that has brought disorder and violence to the streets, including a bus that was struck by a petrol bomb and highjacked, and police officers being attacked.

The group said in a Facebook post on April 8: "The recent public disorder has deflected from the original issues that have caused such dismay and anger from within our community."

Of these "original issues," the group points to the Bobby Storey funeral, the Chief Constable's failure to "inspire confidence," and the Northern Ireland Protocol being "foisted upon us without consent nor appropriate justification."

"All of the above issues are political issues," the group said, "that can only be resolved through dialogue and consensus.

"Rioting, street disturbances, and the destruction of property will not change what must be solved by our political representatives.

"We have stated on numerous occasions that the way forward must be through politics alone. We implore our supporters, our friends, family members of our friends, and anyone with influence to calm tensions, to refrain from posting provocative material on social media, and to all come together and galvanise support for our (very well-intentioned) concerns and relay this level of concern to our political representatives.

"In turn, we call upon our political representatives to step forward with clear determination and bring forward proposals that command both support and respect.

"Once again we reiterate - street disturbances will not solve our issues. Politics must be allowed to. We ask for your support during this difficult time."

SOUTH BELFAST UPRG STATEMENT The recent public disorder has deflected from the original issues that have caused such...

The following day, April 9, the umbrella organization Loyalist Communities Council (LCC) issued its own statement in which they confirmed that none of their associated groups "have been involved either directly or indirectly in the violence witnessed in recent days."

The group said: "The right to peaceful protest is a fundamental human right but we have made clear in all our public statements that any actions taken by the Loyalist community should be entirely peaceful. We again place on record our absolute determination to remove the hard border between Northern Ireland and the rest of our country that has been imposed on us by the NI Protocol.

"We have repeatedly urged HM Government, political leaders, and Institutions to take seriously our warnings of the dangerous consequences of imposing this hard border on us and the need for earnest dialogue to resolve matters. We reiterate that message now.

"The LCC notes that the Prime Minister has called for dialogue to resolve political problems. The dialogue recommended by the Prime minister must recognise that the basis on which the Irish government promoted their Brexit settlement was disingenuous and wrong, and breached the core safeguards and guarantees contained within the Belfast Agreement. For Irish government ministers to use the threat of resumed violence as a negotiating tool was unforgivable. A new Protocol must be negotiated that restores those key Agreement safeguards. In practice, this means no hard border between Northern Ireland and the rest of the United Kingdom, and no hard border on this island.

"In the coming days, we urge all Unionists and Loyalists to remain vigilant to the dangers of fake and anonymous social media accounts, and we urge our people not to get drawn into violent confrontations.

"The LCC is seeking an end to all violence and to solve the underlying concerns of the Loyalist and Unionist communities whether that is due to the imposition of the Protocol, or the clear feelings of inequality in how our communities our policed and how justice is administered. We are determined to ensure that these serous and legitimate political concerns felt across Unionism and Loyalism are not allowed to be framed in terms of criminality."

Not long after the loyalist statements, the PSNI confirmed today, April 9, that 74 police officers have been injured in the disorder since last week, including 19 officers yesterday, April 8. A police dog was also injured during the disorder on Thursday.

Saying that "this activity must stop," the PSNI added: “We know that young people are involved in this disorder and they need to quickly realise that engaging in this type of behaviour is not only risking their safety, they also their futures.

“Parents and guardians, please speak to your children and explain the consequences of becoming involved in this senseless activity.

“We will continue to work to identify those involved in this disorder and bring them before the courts. By working with the community, political representatives and other partners, we aim to ensure that this violence is brought to an end immediately.”

Speaking on Friday, Northern Ireland Assistant Chief Constable Jonathan Roberts said: "We feel that there may be some people who could have connection to proscribed organisations, who have been present on the scenes of violence.

"But we don't believe it's been sanctioned and organised by prescribed organisations for peaceful protests."