The EU will delay legal action against the UK over the Brexit Withdrawal Agreement due to the outbreak of violent riots in Northern Ireland. 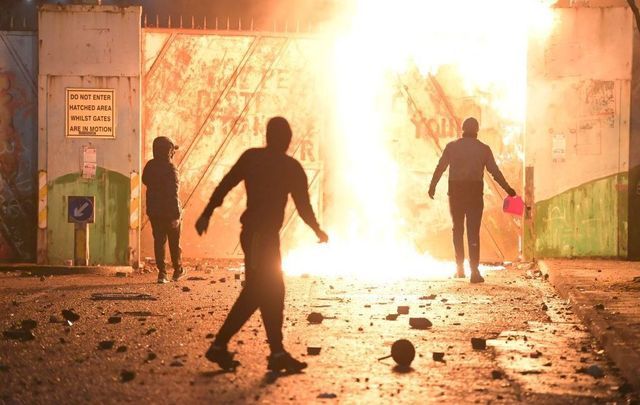 Loyalist rioters burn a gate in a peace wall in Belfast. Getty

The European Union is set to delay legal action against the United Kingdom for breaching the terms of the Brexit Withdrawal Agreement in response to violent riots that have taken hold of Northern Ireland over the past two weeks.

The temporary grace period was designed to give businesses time to adjust to the new customs border down the Irish Sea, but the EU claimed that the UK's unilateral decision to extend the grace period violated the " duty of good faith" set out in the Brexit Withdraw Agreement.

The EU was poised to push forward with legal action against the UK on April 15 but is now set to delay legal proceedings after violent riots erupted in Northern Ireland over an eight-day period.

Bloomberg reports that the EU is aware that a hardline approach may be inflammatory to unionists in Northern Ireland, who are reportedly rioting in protest to the Northern Ireland Protocol. Some sources claim that unionists believe that the Protocol has undermined Northern Ireland's position in the United Kingdom.

The EU is now working on a joint plan with the United Kingdom to help restore calm in Northern Ireland after eight days of continuous rioting left at least 88 PSNI officers injured.

On Friday night, four young loyalist rioters hijacked a car before setting it alight and sending it in the direction of police officers gathered at a barricade.

Meanwhile, loyalist rioters in Belfast also hijacked and petrol-bombed a double-decker bus on Wednesday night in the most shocking night of violence in the eight-day period.

The PSNI said that the riots were Northern Ireland's worst violence in several years and used water cannons for the first time in six years last Thursday after nationalist and unionist youths clashed in East Belfast.

The EU believes that delaying legal action against the UK buys time to resolve and defuse tensions in Northern Ireland and Bloomberg reports that the EU is determined not to deepen divisions with the UK.

Loyalist leaders called off several marches and protests planned for Saturday out of respect for Prince Philip, the Duke of Edinburgh, who died at the age of 99 on Friday.