Unionist and nationalist rioters launched missiles at the police during a seventh night of violence in Northern Ireland, forcing officers to deploy a water cannon for the first time in six years. 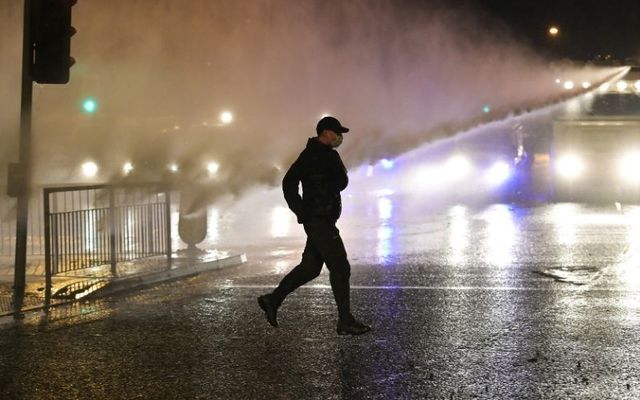 President Joe Biden called for calm in Northern Ireland after the PSNI used water cannons for the first time in six years to disperse nationalist and loyalist rioters on the seventh consecutive night of violence in Belfast.

White House Press Secretary Jen Psaki said in a statement that the Biden Administration was "concerned by the violence in Northern Ireland" and that Biden remained "steadfast" in his support for a "secure and prosperous Northern Ireland" after loyalist and nationalist youths clashed on the streets of Belfast.

There was a heavy police presence in operation in West Belfast on Thursday night in an attempt to quell further scenes of unrest on either side of a Belfast peace wall.

However, Rioters hurled stones, petrol bombs, and fireworks at each other and the police during violent clashes on the Springfield Road, forcing the PSNI to warn rioters to "disperse or the water cannon will be used".

Rioters on both sides of the peace wall continued to launch missiles at officers and the PSNI deployed the water cannon after several further warnings.

The PSNI also threatened to use "impact rounds" - regularly referred to as plastic bullets - to disperse the rioters.

The PSNI said that 19 officers were injured during the violent clashes on Thursday with a total of 74 officers injured since the outbreak of violence in Northern Ireland last Friday.

The violence began in loyalist communities in Derry and Belfast last Friday in response to the PSNI's decision not to prosecute Sinn Féin members for breaching coronavirus restrictions and attending the funeral of IRA member Bobby Storey last year. Some sources also cite loyalist opposition to the Northern Ireland Protocol and opposition to drug seizures against a faction of the UDA in southeast Antrim as potential causes of the unrest.

The PSNI said that the violence instigated by loyalist rioters on Wednesday night was on a scale not seen in Northern Ireland for years.

Northern Ireland Secretary of State Brandon Lewis described the scenes of violence as "despicable" and has flown into Belfast to meet with political and community leaders on both sides of the political spectrum in Northern Ireland. Lewis also called on the Loyalist Communities Council, which represents the views of loyalist paramilitaries, to condemn the riots.

Meanwhile, Sinn Féin President Mary Lou McDonald said that loyalist violence has been deliberately stoked up to increase tensions in Northern Ireland and urged unionist leaders to "show enlightened leadership" and call off further protests planned for this weekend.

"Now is a time for leadership among unionists and loyalism ... violence is not the answer for anyone, this is disastrous for communities and young people," McDonald told RTÉ Radio One's Morning Ireland.