"Conservatives are spending plenty of their own time in County Cancel." 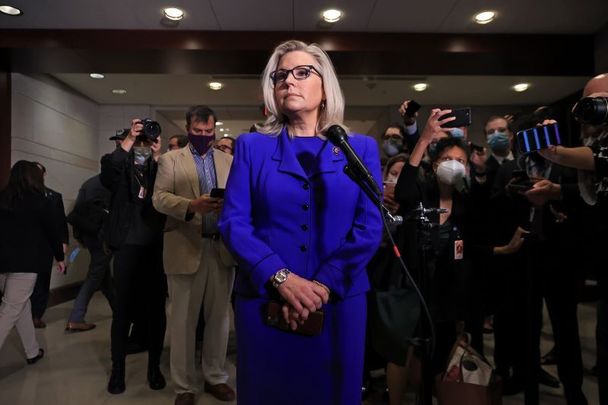 May 12, 2021: Rep. Liz Cheney (R-WY) talks to reporters after House Republicans voted to remove her as conference chair. Getty Images

I found myself scrolling through Twitter this week just as an Irish author was taking a digital beating. She had dared to say something negative about Meghan Markle.

At least I think that's what the fuss was. By the time I arrived, the author was apologizing profusely and had deleted the posts that got this Twitter tempest whirled up in the first place.

The fact that I can't track down the precise details of this conflict is precisely what bothers so many conservatives about “cancel culture.” It stifles debate. It's easier and safer just to shut up and apologize.

And they certainly have a point. After all, I don’t even want to reveal too many details about this, lest I myself run afoul of the online thought police.

Here’s what I do know: A person from Ireland was being scolded for saying demeaning things...about a British duchess!

Is this the type of downtrodden person social justice warriors really want to go to the barricades for?

The Duchess of Sussex? Countess of Dumbarton? The Baroness of Kilkeel, in Co. Down?

A little like making a martyr of Maggie Thatcher in the name of feminism.

And yet, the Irish author apologized. Profusely.

Very important to show that she sees the baroness’s struggle.

Fox Newsies like to mock such deference, but this week they may need to chill out on their righteous rage because conservatives are spending plenty of their own time in County Cancel.

"House Republicans elected Elise Stefanik to their third-ranking leadership position Friday, completing a shift from Rep. Liz Cheney, a fierce critic of former President Donald Trump who voted to impeach him, to a lawmaker who vocally defended him," USA Today noted.

We don’t like what you have to say? Why debate it? Let’s just shut you up and shut you out.

That’s some hardcore canceling in my book.

Once again, certain kinds of Catholics like to live Jesus’ example by deciding who’s good enough to be in their club and who isn’t.

Brooklyn native and Irish American priest Father Gerald Murray was recently quoted as saying (according to the National Catholic Reporter newspaper) that President Joe Biden "obstinately perseveres in manifest grave sin," by failing to uphold the moral law when it comes to issues of abortion and gay marriage.

Therefore, as NCR put it, Murray and his supporters believe “Biden should be denied Communion.”

Murray told attendees at a recent conference that Biden has a "deficient understanding of his obligation as a Christian and therefore something that is subject to public correction."

And it’s not just Murray and Biden. Conservative clergy, pundits, and others get loud and proud about the fineries of theology when it comes to the sacraments, or speaking engagements at Catholic universities.

That’s canceled in my book.

And don’t give this argument about the sanctity of the sacraments, or the severity of some sins over other sins. Not in the Catholic Church in 2021.

On the day that every person who steps into a church or Catholic university, and hands over a card certifying the purity of their adherence to church doctrine -- you know, like the vax cards -- we can begin talking about who should or should not be theologically canceled.

Until then, as NCR notes, “Biden's two local bishops in Washington, D.C., and Wilmington, Delaware...have said they would not deny him Communion in their respective dioceses, and Pope Francis has signaled an eagerness to find ways to collaborate with the Biden administration.”

The point is this: Republicans certainly have a point when they go on (and on, and on) about the evils of cancel culture.

They would know, having used these tactics themselves.