Father Kevin O'Brien, who said Mass for the Biden family on inauguration day, has been "accused of ... something." 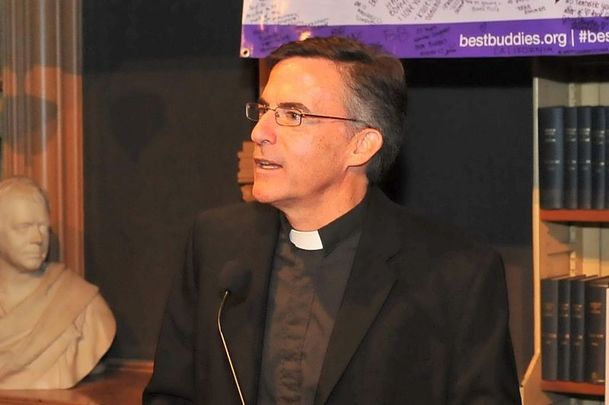 It might seem as if we can’t get enough of men in the public eye behaving badly.

Most recently, there were the bizarre accusations made against (naturally) Florida Congressman Matt Gaetz, which so far have included everything from sex trafficking to something called “bro culture.”

As is only fitting these days, Gaetz’s, uh, passionate denials were nearly as bizarre as the accusations against him. It certainly doesn't help that Gaetz looks like a cartoon caricature of Colin Jost and Maria Shriver’s baby.

Then there were the accusations made against New York City Comptroller and mayoral candidate Scott Stringer. This after fellow candidate Andrew Yang was accused of acting improperly in a video that included a man using offensive language.

A statement released by several lawmakers also referenced “bro culture,” and added that Yang’s behavior was “disqualifying for someone who is seeking to be mayor of New York.”

Among those who said this? Scott Stringer.

Given this, you would think claims made against a “family friend” of the most powerful man in the land would grab lots of attention.

But it’s been a month since an Irish American Catholic priest who is very close to President Joe Biden was accused of...something. And not much has been said about it.

This is either proof that Tucker Carlson and his Proud Boy minions are right, and there is a massive conspiracy afoot to make all Biden news good news.

Or -- gasp! -- some in the media have decided to act responsibly when it comes to priests accused of wrongdoing.

Both possibilities are scary.

This story begins in January when Biden was inaugurated and the new president selected Jesuit priest Kevin O’Brien to celebrate Mass before the ceremony. At the time, O’Brien was widely described as a Biden “family friend.”

My friends of ≈15 years, @JoeBiden & @DrBiden asked me to celebrate Mass for their family & friends at inauguration. I will offer the peace and support of prayer as the new admin tries to heal a divided nation. May God bless all public officials as they serve the common good. pic.twitter.com/Mhqd6TKNUL

O’Brien is president of Santa Clara University, where he’d also served as dean of the Jesuit School of Theology.

“O’Brien...has been friends with the Biden family for nearly 15 years, dating back to when O’Brien was serving at Georgetown University,” read a glowing statement from Santa Clara U. back in January, adding, “O’Brien accepted the invitation to celebrate Mass from President-elect Biden, as he did before in Biden's previous inaugurations.”

Then in late March, various news outlets ran (very) brief reports that O’Brien allegedly “exhibited behaviors in adult settings, consisting primarily of conversations, which may be inconsistent with established Jesuit protocols and boundaries.”

O’Brien went on leave from his responsibilities at Santa Clara, which offered no further info about the allegations against him, other than to say that trustees “support those who came forward to share their accounts.”

Understandably, advocates for those who have suffered at the hands of powerful people had some follow-up questions.

The Survivors Network of those Abused by Priests (SNAP) called on Santa Clara to release more information “so as to encourage others who may have experienced similar misconduct to come forward.”

“While we appreciate that action has been taken by the Santa Clara board of trustees, we think that the vague statement released by the university does no favors to either the university community or the alleged victims,” the SNAP statement said.

Then again, this is one of those fascinating moments when it seems there is bipartisan agreement to maintain the weird mystery of this whole episode.

Fans of Biden love that he has turned into a 21st century FDR, so don’t want to hear about some (allegedly) creepy priest he’s pals with.

And conservatives are always blasting the media as anti-religious in general and anti-Catholic specifically. They don’t need another (allegedly) creepy priest out there confirming the media’s suspicions.

There’s just the matter of what Father O’Brien said or did, and who he said or did it to.