The greatest thing Biden can do this St. Patrick’s week is to make clear to the British that the Good Friday Agreement trumps all other issues when it comes to Ireland. 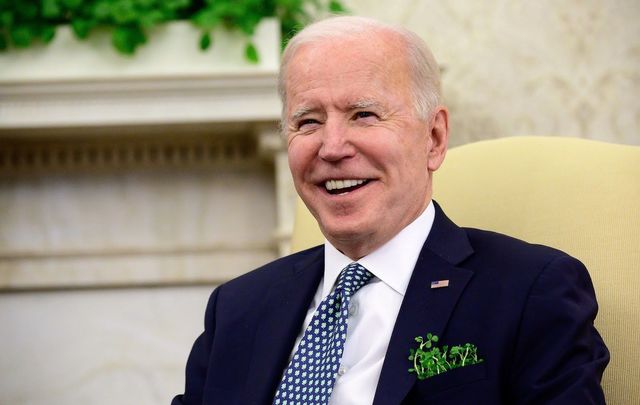 The priority of the Biden administration this St. Patrick’s period must be to stand tall as a guarantor of the Good Friday Agreement as new developments place that historic pact in jeopardy.

*This editorial first appeared in the Irish Voice newspaper, sister publication to IrishCentral, on March 17, 2021.

There was a worrying indicator of trouble looming in Northern Ireland last week when The Loyalist Communities Council stated that it no longer feels bound by the Belfast Agreement of 1998 which brought a cold peace to Northern Ireland.

The loyalists, comprised of the Ulster Defence Association and the Ulster Volunteer Force, were firmly committed to the agreement for over 20 years. While they never had the high profile of, say, Ian Paisley, the loyalist support for the agreement was a highly significant contribution to the peace process brought about by leaders like Gusty Spence, David Ervine, Gary McMichael, and Billy Hutchinson.

As to be expected, the Northern Ireland Protocol in the final Brexit deal which established a de facto border between Britain and Ireland in the Irish Sea is at the root of the festering problem.

The loyalists’ letter warned that the protocol now undermines the “basis on which the Combined Loyalist Military Command (CLMC) agreed their 1994 ceasefire and subsequent support for the Belfast Agreement.”

The danger in that statement is that the Belfast Agreement is utterly dependent on the principle of consent, that both sides agree on the mechanisms such as devolved government, which has essentially been the case -- until now.

No consent, no basis for the agreement. Now with one significant player announcing they no longer give consent, could other unionist groups follow?

Brexit continues to endanger the Good Friday Agreement, and the British continue to act in a totally ad hoc manner without consulting the other parties.

Their latest move has been to unilaterally announce changes yet again to the protocol regarding critical timing of agreed events to shore it up.

The Irish government has been loud and clear, stating new proposals putting the sea border at risk are a recipe for disaster and a resumption of violence.

As it currently stands, the border is in the Irish Sea, but there have been long customs delays. Now loyalists say that the border in the sea is no longer acceptable and they are threatening a return to violence.

Meanwhile, to make matters worse, the British have placed Lord David Frost, a hardline Brexiteer, as the new man in charge of European Union relations which also covers the border issue with Ireland.

Frost, who was described in The Irish Times as an “unusually unsuitable” appointment to the new job, is known for his “bull in the china shop” approach to politics.

He had hardly taken the job when he signaled the change in the agreed implementation of the Northern Ireland Protocol without even consulting the Irish government.

So this may well be where the Biden administration comes in. Let’s forget the usual shamrock frippery this St. Patrick’s period and concentrate on having President Biden make it very clear indeed that the return of a land border in Ireland or unilateral moves on key issues by Britain are not acceptable to the U.S., long a peace process player.

The key is that Johnson desperately wants a good relationship with Biden and a new trade deal. Biden advisors such as National Security Advisor Jake Sullivan are old hands at the Irish peace process and know what to do.

The greatest thing Biden can do this St. Patrick’s week is make clear to the British the retention of the Good Friday Agreement trumps all other issues when it comes to Ireland, and it can never be sacrificed at the altar of Brexit.