How Irish issues in "The Gilded Age" highlight modern-day solutions

Bridget, an Irish maid in the HBO drama "The Gilded Age", faces immigration concerns that put today's issues into context. 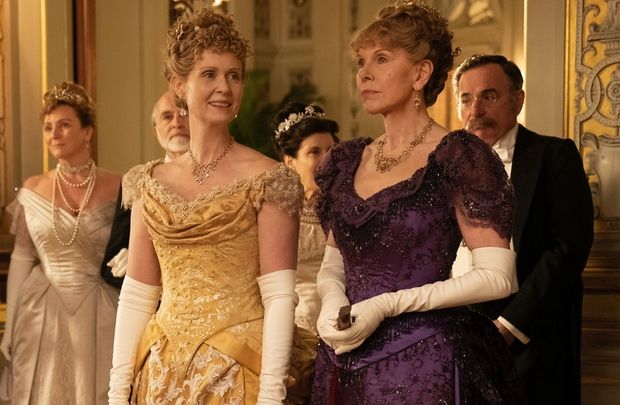 There are two big new shows out there getting lots of attention – one on HBO, another a modern take on a classic of the American theater.

Both have serious Irish issues.

First, there is HBO’s new drama The Gilded Age.  Starring Christine Baranski and Cynthia Nixon, the show is set in 1880s New York, a time of great change, as many ads for the show suggest.

But to judge from the first few episodes, the only real change that seemed to take place was that the really, really rich still looked down on the merely rich, who could not afford to put quite so many purple feathers in their expensive hats.

The Gilded Age was created by Julian Fellowes, who also created the wildly popular Downton Abbey.  So we should not be surprised that the show has upper crust folks getting their knickers in a twist, and then untwisting them.

It’s also true that down in the bowels of the Gilded Age mansions there are some immigrants, serving up food and making up the beds.

Among them is an Irish maid, naturally named Bridget. Early on in the show, the only thing Bridget seems to worry about is all those ex-slaves from the south who might be coming to New York to take jobs away from the Irish.

Which was a real source of conflict at the time. Which, in some ways, we are still struggling to deal with today.

But there were other things going on in the 1880s that we really should talk about a lot more.  Like the fact that an Irish Catholic immigrant actually became mayor of New York in 1880. And of Boston in 1885.

But folks didn’t stand around congratulating themselves about how diverse America was becoming.  Lots of folks felt these mayors were not even in the U.S. legally, much less able to run a city.  The same people were worried that fine Anglo Saxons were being “replaced” by inferior aliens.

Maybe if we reminded ourselves about this aspect of the Gilded Age, not so many folks would be freaking out about today’s supposed “great replacement.”

Meanwhile, over at the Minetta Lane Theatre in Manhattan, you can see a new production of Irish American playwright Eugene O’Neill’s classic play A Long Day’s Journey Into Night.

In the tradition of Lin Manuel Miranda’s Hamilton, we have a cast that is not so hung up on the particularities of history.  And so Jamie and Edmund, the children of the play’s Irish immigrant patriarch James Tyrone, are played by African American actors Jason Bowen and Ato Blankson-Wood.

For the record, I am a big supporter of so-called “color blind casting.” No actor can or should ever be expected to perfectly represent the authentic background of a fictional character.  That’s why it’s called, you know, acting.

But this has gotten complicated in recent years, with quite a few folks sick and tired of cultural appropriations, as well as members of marginalized communities missing out on performance opportunities.

Then there is the lingering stench of blackface and other offensive results when performers depict another culture but do not respect it.

This has not been much of a controversy for this new production of Long Day’s Journey, since it is understood that you can’t really disrespect white folks, since they’re the ones who have historically done all the disrespecting.

But is Long Day’s Journey simply – or merely – a “white” play? Can, or should, it be separated from its specifically Irish sensibility?

“And keep your dirty tongue off Ireland!” James howls at his son Jamie.

“You’re a fine one to sneer, with the map of it on your face!”

That such a map is represented by a black face in 2022, in and of itself, should not be a problem, especially if you get lost in O’Neill’s fever dream, and suspend disbelief, as any great story allows you to do.

And yet, as we know all too well, such things have caused many, many problems many, many times.

Complicating things further? Long Day’s Journey has been chopped down from a four to a two-hour play.

Well, that’s one way to avoid various problems. And if you keep on cutting, all the problems may soon go away.