"Gilded Age" has been dubbed the "US Downton Abbey" and follows a group of fictional characters inspired by real-life socialites who were prominent in New York social circles at the turn of the 20th century. 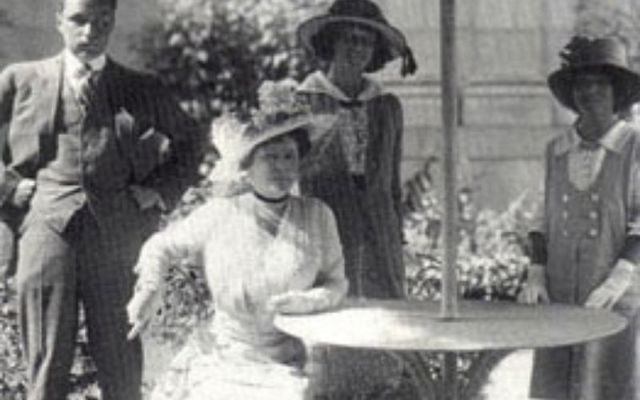 Theresa Fair Oelrichs (seated) was one of the prominent socialites. Public Domain

The creator of the immensely popular period drama "Downton Abbey" is set to release a new series depicting the wealthy socialites who dominated the New York social scene in the late 1800s, including Irish-American woman Theresa Fair Oelrichs.

"Gilded Age" has been dubbed the "US Downton Abbey" and follows a group of fictional characters inspired by real-life socialites who were prominent in New York social circles at the turn of the 20th century.

The drama takes place in a period known as the Gilden Age, a period renowned for ostentatious materialism that began in 1870s America following the Reconstruction Era.

The era saw a vicious conflict between Old Money and New Money and the series attempts to recreate the brutal social circles that existed at the time.

The series focuses on newcomer Marian Brook (Louisa Jacobson) who is guided by her Old Money aunts as they struggle with their New Money friends.

"Gilded Age" will feature fictional depictions of Caroline Schermerhorn Astor - the all-powerful gatekeeper of the traditional upper classes - and her rival Alva Vanderbilt - whose family's first-generation wealth came from the railroad industry.

The series will also feature a fictional depiction of Theresa "Tessie" Fair Oelrichs, one of Newport's leading socialites at the turn of the century.

Oelrichs was born and raised in California and Nevada and was the heiress to a large silver fortune.

Her father James Fair was an Irish immigrant from County Tyrone who moved to the United States at the age of 12 in 1843.

Her father was a gold and silver prospector and met his future wife Theresa Rooney while working with newly-discovered traces in Nevada.

James Fair married Theresa Rooney in 1861, while their first-born daughter Tessie was born in 1871.

Two years after Tessie's birth, James Fair discovered the "Big Bonanza" in Virginia City along with three other partners.

The Big Bonanza became the largest single deposit of gold and silver ever found and saw more than $100 worth of gold (more than $2.5 billion today) extracted from the mine before it was exhausted in 1898.

James Fair used the money that he had made from the Big Bonanza to expand into the railroad and real estate industries and amassed profits of more than $50 million.

James Fair and Theresa Rooney separated following a much-publicized divorce in 1883, leading Tessie to move to San Francisco with her mother and her sister Virginia.

Theresa, who received $5 million as part of the divorce settlement, took her daughters to Newport, Rhode Island, for summer vacations and it was there that Tessie met her future husband, steamship tycoon Hermann Oelrichs.

The couple were married in 1890 and purchased the Newport estate of diplomat George Bancroft a year later.

The Oelrichs expanded the property over the years and also commissioned architectural firm McKim, Mead, and White to design Rosecliff, a mansion based on the Grand Trianon at Versailles.

Tessie emerged as a formidable force in the Newport social circles of the late 1890s and hosted many parties during the summer.

She often held high-profile events such as ballets, operas, and a circus at her Rosecliff mansion.

The premiere of Gilded Age airs on Monday, January 24, on HBO.