How Eugene O'Neill took on the Ku Klux Klan

Irish American playwright shone a light on ancient hatreds paving the way for a more open and tolerant society. 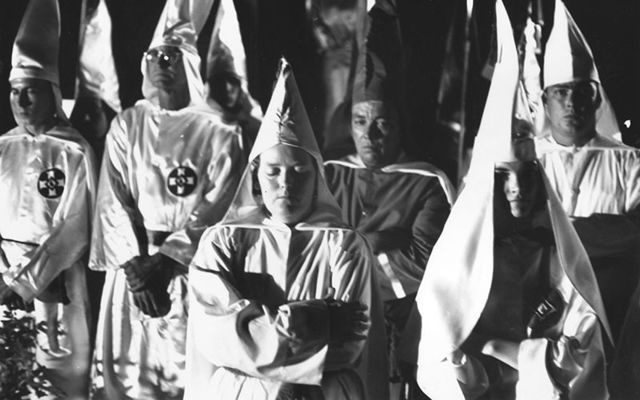 An O'Neill to be celebrated: Irish American playwright shone a light on ancient hatreds paving the way for a more open and tolerant society.

Throughout June, we'll be celebrating the O'Neill family on IrishCentral and the many great people who share the Irish last name. Throughout the month, we'll be looking at some of the most successful O'Neills and the places in Ireland you should visit associated with the surname.

Are you an O'Neill? Tell us about your Irish roots here.

Not long ago I stopped at a 7-Eleven just outside the Holland Tunnel. Not exactly the kind of place you expect to get a radical religious message. But, hey, this was on the Jersey side. So you expect the unexpected.

Laying about the store were discarded copies of what appeared to be a color, eight-page newsletter with a blaring headline about “The Pope’s Secrets.” There was an accompanying photo of the late Pope John Paul II with both hands raised to his eyes as if they were binoculars.

Focused as I was on the playful photo of the pontiff, it took me a minute to read the sub-headline: “Are the IRS, FBI, U.S. Department of Labor, the Mafia and Labor Unions Part of the Vatican?”

“Is the Pope the Super-Boss of all government agencies as well as the Vatican?”

What we had here was a good old-fashioned anti-Catholic screed updated for the 21st century.

This hateful newsletter came to my mind as I was reading an excellent new biography by Robert M. Dowling due out later this month entitled "Eugene O’Neill: A Life in Four Acts."

Dowling, a lifelong O’Neill devotee and Central Connecticut State University professor, recounts the uproar which unfolded in 1924 over O’Neill’s play "All God’s Chillun Got Wings."

The controversy surrounding the play – which is about a love affair between an Irish American woman and an African American man – should encourage people, first and foremost, to be thankful we live now, rather than back in 1924. Yes, we have tons of racial and religious problems in 2014. But they’re nothing compared to the bad old days when O’Neill was writing.

Everyone, it seemed, was offended by O’Neill’s play, from esteemed Columbia University Professor George Odell (“Eugene O’Neill is responsible for the profanity and insanity on the American stage today,” he thundered) to the Society for the Prevention of Vice and Crime to the Ku Klux Klan to the Salvation Army, for heaven’s sake.

“The Long Island chapter of the Ku Klux Klan,” writes Dowling, “threatened to blow up the theater on opening night.”

A Texas Klan member “demanded the immediate dispatch [of O’Neill] on the grounds that he is a Catholic and hence doubtless trying to stir up the Negroes to arm, march on Washington, and burn down the Nordic White House.”

As Dowling notes, the Klan at this time was no mere fringe group. Rallying behind an anti-immigrant, anti-Catholic as well as racist message, the Klan was five million strong in the 1920s, with members serving as state senators, governors and other lawmakers.

O’Neill eventually struck back at the Klan, and he made a point of emphasizing his Irish background, knowing it would enrage these bigots.

Members of the Klu Klux Klan, photographed in 1922.

A Klansman from Georgia threatened O’Neill’s son in a letter, prompting the great playwright – whose father was a famous, Kilkenny-born actor – to respond with a simple, straightforward obscenity: “Go f*** yourself…signed, Gene Tyrone O’Neill.”

As Dowling writes: “O’Neill’s actual middle name was Gladstone, named for the 19th-century British prime minister who favored home rule for Ireland. Tyrone is the country from which the O’Neill tribe originated…. It’s probable that by signing his letter this way, [O’Neill] was defiantly identifying himself as Irish Catholic, another group hated by the Klan.”

Unfortunately, it wasn’t just the Klan who was angry at O’Neill.

“It seemed…as if all the feeble-witted both in and out of the K.K.K. were,” O’Neill himself later said, including, “Irish Catholics who threatened to pull my ears off as a disgrace to their race and religion, to equally infuriated Nordic Kluxers who knew that I had Negro blood, or else was a Jewish pervert masquerading under a Christian name in order to do subversive propaganda for the Pope!”

Ninety years later, as Dowling’s excellent new biography makes clear, we owe a debt of gratitude to Eugene O’Neill. He bravely forced ancient hatreds into the light, paving the way for our imperfect but nevertheless more open and tolerant society.

Eventually, this message may even make its way to the paranoid anti-Catholics on the other side of the Holland Tunnel.

Are you an O'Neill? Tell us about your Irish roots here.