The untold story of 50,000 Famine Irish who were deported back to Ireland by New England authorities. 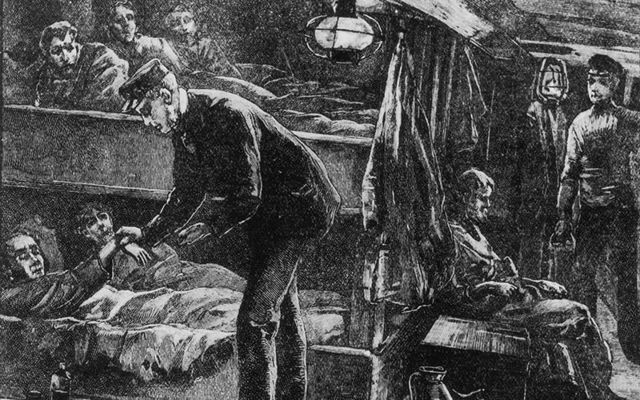 An illustration of Irish on a coffin ship fleeing the Great Hunger. Getty

Massachusetts, heavily influenced by the Know-Nothing Protestant group, allowed the deportation of Irish fleeing the horrors of the Great Hunger.

Writing in The Irish Times in March 2016, Hidetaka Hirota, a Mellon Research Fellow who is writing a book “Expelling the Poor” (Oxford University 2017) on the subject, revealed a little-known hardship many Famine emigrants faced.

The Know-Nothings, the Ku Klux Klan-like Protestant group, was behind the persecution of Catholics who had fled to Boston during the Famine.

The State of Massachusetts, heavily influenced by the Know-Nothings, “systematically deported destitute Irish men and women as a matter of public policy. As anti-immigrant sentiment grows today in Europe and America, this story of hardship is worth remembering,” Hidetaka Hirota wrote.

Massachusetts law allowed the deportation of beggars and many indigent Irish were targeted.

Foreign paupers, up to 50,000 in number, were deported between 1840 and 1870, the vast majority of whom were Irish. It was a sweeping policy. Irish Americans born in the USA, that is citizens, were among the swept up. Some immigrants had spent up to 40 years in America but were not spared. American-born children were also shipped off

As Hirota wrote, 'In 1855, the Boston Pilot, an Irish Catholic newspaper, fiercely condemned these manners of removal: “How much more will [the deportation law] be abused under this vile tyranny which decrees that poverty, Irishism, and Catholicity are crimes, and to be punished as such?”'

Deportation was supported by the Know-Nothings. Calling Irish paupers “leeches upon our taxpayers” they described “an ignorant and vicious Irish Catholic population.” One leading nativist in Boston said in 1858 that an Irishman “will not work while he can exist by begging.”

Most were shipped to Liverpool and many were shipped on to Ireland because of their condition, in effect being deported twice. Even in Ireland, they were not welcome. Hirota wrote that 'a group of four deportees entered the workhouse in Cork in 1868, one local official asserted that they “ought not to come at all.” Another Cork official complained, “This city is the receptacle for every poor person who comes from America or England.” Some were even re-deported back to America.