Over the weekend, the Republic of Ireland recorded its lowest number of daily new COVID cases since December. 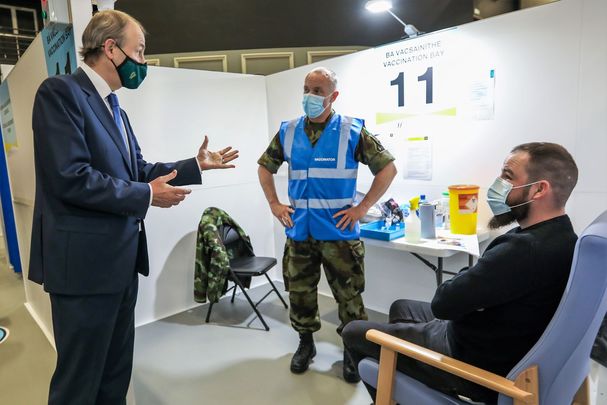 April 7, 2021: Taoiseach Micheal Martin speaking to vaccinator Tony O'Sullivan from the Defence Forces and Jason Gleeson from Kilcock, as he visited the HSE Covid-19 Vaccination Centre in the Citywest Conference Centre in Dublin. RollingNews.ie

Ireland's strict lockdown appears to be paying off after the country recorded its lowest daily Covid-19 cases for over four months.

*Editor's Note: This column first appeared in the April 21 edition of the Irish Voice newspaper, sister publication to IrishCentral.

Despite the ongoing difficulties relating to the sluggish vaccination rollout, Ireland finally appears to have turned a corner in its battle with the pandemic after registering its smallest daily caseload since mid-December last year.

Just 269 new cases of the killer bug were recorded last Sunday, which equates to the lowest daily figure since December 14. In the same 24-hour period, it was also confirmed that hospital numbers had fallen to their lowest level since last October.

The welcome milestones have given a much-needed boost to the public and a heightened expectation that the end of the latest lockdown, which has been in place since just after Christmas, is finally in sight.

The government has indicated that if current trends continue more easing of restrictions will follow next month, including the opening of much of the hard-hit retail sector such as hairdressers, barbers, and department stores.

And inter-county travel is set to be given the green light in the near future, which will represent another welcome development for householders who up to recently have lived with a strict five-kilometer travel restriction.

He said, "The declining incidence across all age groups in recent weeks cannot be attributed to vaccination, but rather to the enormous efforts of people across society to keep themselves and their families safe."

His comments were echoed by Taoiseach Micheál Martin who added, "We have begun the gradual steps of lifting some restrictions. And if we can maintain control of the virus, we will go as fast as possible in lifting more."

However, the Irish Independent notes that not all experts share the same level of optimism.

The publication reports that Dr. Ina Kelly, the new president of the Irish Medical Organisation, has warned that medics may be dealing with the fall-out from the virus for the remainder of their lives.

She said, "We are making progress certainly.  We have largely succeeded so far in halting and rolling back the third wave of the virus here in Ireland, and the roll-out of vaccines gives us huge hope that we are, at least, at the beginning of the end of this phase of the pandemic."

However, the public health specialist added, "But the threat from Covid-19 is going to be with us for a long time to come, and as happens during pandemics, we can see now the threat posed by variants."

Meanwhile, top health officials have suggested that Ireland's faltering vaccination program could be speeded up with the establishment of drive-through immunization centers.

According to internal Health Service Executive documents, existing drive-through facilities have been successfully used in the past for immunizing against other diseases and for testing during the Covid-19 pandemic.

But some experts believe that "repurposing" such centers for administering jabs could be the key to accelerating the country's stop-start vaccination drive.

Supporters of the idea point to both Israel and the U.K., two countries that have rolled out hugely successful immunization programs with the aid of drive-through facilities.

He said, "We need drive-through clinics where you drive up in your car, pull down the window, put your arm out and get your vaccine.

"You then wait 15 to 20 minutes and off you go. It makes more sense and is much quicker."