The search of a grave at Glasnevin Cemetery in Dublin unearthed some of my family’s secrets. 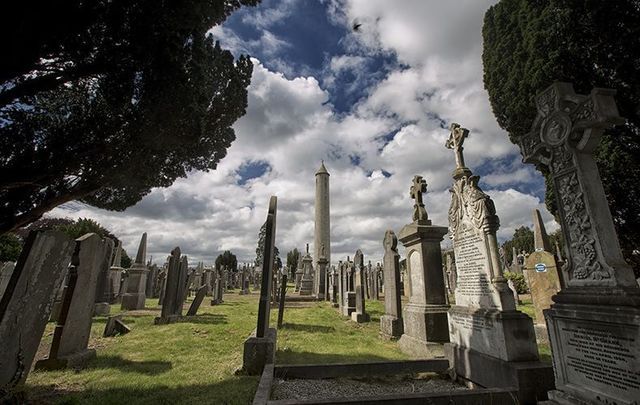 The search of a grave at Glasnevin Cemetery in Dublin unearthed some family secrets for Dermot McEvoy. Here's how to find more about your family's burial plot in Ireland.

I have a strange affinity for cemeteries.

This is especially true when I’m in Dublin and I go to visit my mom in Glasnevin Cemetery. I find Glasnevin to be full of history. As you enter the cemetery, dead ahead—no pun intended—is Daniel O’Connell’s tower, under which his coffin rests. To the right are the “Forgotten Ten”—young men, including Kevin Barry, murdered by the British in the time between All Saints Day 1920 and the Truce in July 1921. Most of them were innocent, pawns to be played by the British as the endgame in Ireland played out. Next to these lads is the tiny stone of Sir Roger Casement, who was replanted here after many years in a British prison yard.

Straight ahead is the appropriately named Republican Plot. The heroes are many: Jeremiah O’Donovan Rossa and his friend John Devoy; Harry Boland, Nurse Elizabeth O’Farrell who set up Padraig Pearse’s surrender in 1916; Cathal Brugha; and the Countess Markievicz. Not far south is the family grave of the De Valeras.

A few yards to the west is the most popular grave in the cemetery—Commandant-General Michael Collins, T.D. It is covered with flowers and people come to take souvenirs of gravel which covers the plot. Appropriately, this man of the Irish people is right next to the restaurant that is attached to the visitor's center. Collins is never alone, his ghost amused by the talk of Dubliners and the laughter of Irish children. 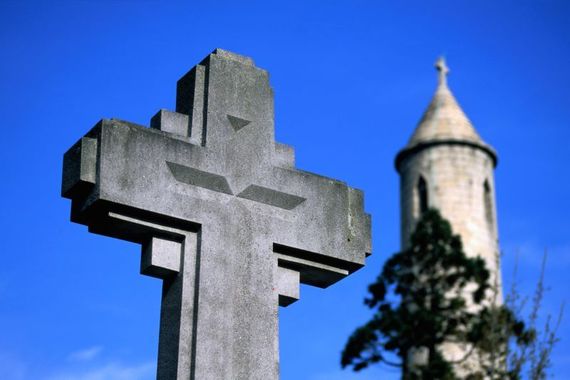 Glasnevin Cemetery is famously the home to more than one million Dubliners. Although I know the cemetery well, several years ago I decided to take the tour with the late Shane MacThomais. The tour is attached to the new museum, which, as you might imagine, is a fairly creepy experience. Shane marched us to several prominent graves and, as he took questions, I asked him if the cemetery had a website? It does— glasnevintrust.ie. Information regarding tours and the museum can also be found here.

When I checked out the website I discovered that they had a Genealogy section so I decided to check out my mother’s family, the Kavanaghs.

My mother’s family had a tragic history, which I chronicled in my Michael Collins novel, 'The 13th Apostle.' In a short period of time it was destroyed by first disease, then revolution. I decided to do an extended grave search (€10 = $11.40) and what I found first delighted me, then shocked me to my core.

I checked down the list and found the family as I knew them from the headstone:

The first delight, then shock

I was pleasantly surprised when I discovered that there were more bodies in the ground then there were on the gravestone.

The first surprise was that there was a woman, Bridget Kavanagh, who died in 1898, aged 60. It soon became obvious that this was Joseph Kavanagh’s mother—my great-grandmother. I had never heard of her before and was delighted. She lived in the same address at #40 Camden Row where my grandparents lived. When I returned to Dublin I immediately went to the General Register Office on Werburgh Street to check her death certificate. She died of esophagus cancer at Our Lady’s Hospice in Harold’s Cross, which is still in operation today.

My joy at discovering my great-grandmother was crushed when I discovered that there was a Mary Josephine Kavanagh, aged three months, in the grave. The reason for my shock is that this was the name of my own mother. If the child in the grave had the same name as my mother, who was my mother?

On my next trip to Dublin, I was on a mission to find out. I went to the General Register Office again and went through the records again. There I found the birth certificate (March 18, 1907) for Mary Josephine and a death certificate three months later (June 24, 1907).

Now it was time to find my mother.

I immediately went to the birth book for 1908 and looked for every Kavanagh baby born in Ireland in 1908. My anxiety was quickly assuaged when I discovered a little girl, Bridget, was born to my grandparents in the Rotunda Maternity Hospital on May 17, 1908. It was a great relief, to put it mildly.

It was obvious that baby Bridget was named after her paternal grandmother, the other mystery in the grave. But how did Bridget become the second Mary Josephine? I immediately went to the Irish census of 1911. There I found the whole family at Long Lane, which is an extension of Camden Row, heading out towards Clanbrassil Street. There my mother, the former Bridget, was listed as Mary. I know that this was the same child as Bridget because her age was listed as “3.” If the original Mary Josephine was listed her age would have been four. Also, another hint: under “Children Born” there is 6; for “Children Living” there is 5. Obviously, Mary Josephine is the dead child.

How did this name change happen? My grandparents, for some reason, decided to rename Bridget after her dead infant sister. I know my grandmother Rosanna was devoted to the Blessed Virgin Mary and perhaps that had something to do with the renaming. There was never any talk in the family about another little girl in the family. It was never brought up by either my mother or my uncles, who lived in New York. I don’t think any of them knew because they were so young when the tragic death occurred.

My guess is that when my mother went to get her birth certificate and told them she was Mary Josephine Kavanagh they pulled her dead sister’s birth certificate. That is the only scenario I can imagine.

The mystery of Mary Kelly

There was one more body in the family grave. Her name was Mary Kelly and she was 10-years-old when she died on January 17, 1877. The Glasnevin transcript says she was the child of a shoemaker and she lived at 41 East Essex Street, which is in the Temple Bar section of Dublin, just off Parliament Street.

As far as I know, there are no Kelly relatives in the family and I could not find a death certificate for young Mary. The Kellys may have been friends of my grandmother’s family who lived in the Temple Bar area of Dublin for generations, attending SS Michael & John’s RC Church, where both my great-grandparents and grandparents were married. Michael & John’s is now the Smock Theatre on Exchange Street Lower.

So, although I was able to unravel all the mysteries of the Kavanagh family, the mystery of Mary Kelly still piques me because maybe she is a lost cousin. But I guess I’ll never know.

If you want more information on vehicles—most of them free or inexpensive—that will help you investigate your Irish family’s genealogy, check out this list.

Many readers have responded to this article on Glasnevin and one IrishCentral reader found more information about Mary Kelly, the little girl in the Kavanagh family grave that no one knows about.

The new information found that her father, the shoemaker, was named Thomas Kelly and the cause of her death was spinal disease.

That doesn’t explain young Mary’s connection to the Conway family—who married into the Kavanagh family in 1900—but there are significant geographical clues. The Conways and their in-laws lived in the Temple Bar area from the 1860s to the late 1930s. They lived in Dame Street next to what is now the Olympia Theatre and also in Crampton Court, right off Dame Street. They also lived in Temple Lane and Sycamore Street, which is a stone’s throw from East Essex Street.

My guess is that little Mary Kelly was either a neighbor or more likely, a cousin of the Conways. She was the first to go into the grave to be followed years later by my great-grandmother, Bridget Kavanagh. So somehow, the grave came into the possession of my grandmother, Rosanna Conway Kavanagh, and she allowed my granny Kavanagh to be buried there while she was courting my grandfather in the late 1890s.

It's a complicated mystery, but I think this is a sound conclusion to that mystery.

*Dermot McEvoy is the author of the "The 13th Apostle: A Novel of Michael Collins and the Irish Uprising" and "Our Lady of Greenwich Village," both now available in paperback, Kindle and Audio from Skyhorse Publishing. He may be reached at dermotmcevoy50@gmail.com. Follow him at www.dermotmcevoy.com. Follow The 13th Apostle on Facebook.