United Kingdom and Ireland could hardly be further apart in how they are approaching COVID-19. 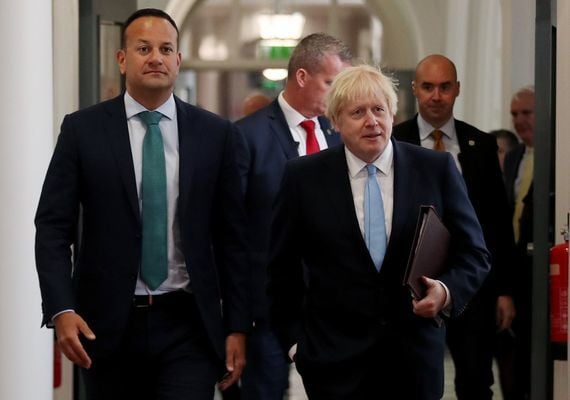 The United Kingdom may be Ireland's closest neighbor, but the two nations could hardly be further apart in how they are approaching COVID-19.

They are virtually polar opposites and Britain's approach could deeply impact the Republic of Ireland, especially since the countries share a significant border in Northern Ireland.

The UK has lagged behind Ireland (and indeed the rest of Europe) in implementing stringent measures to curb the spread of Coronavirus.

Schools continue to remain open as scheduled and the British Government has resisted all public pressure to close them.

On Monday, British politicians entertained the idea of closing schools by holding discussions about the issue, although there has been no hint as to when that might happen.

In Northern Ireland, politicians are divided on the issue.

Meanwhile, Arlene Foster, Northern Ireland's First Minister, is not ready to close them yet but admits that they will have to close eventually.

The Irish Government announced a total shutdown of schools, colleges and childcare facilities last week until at least March 29, although many expect this to last much longer.

The Irish Government would prefer that the UK, or at least Northern Ireland, will follow their example and close down schools.

Taoiseach Leo Varadkar called for an all-island response to COVID-19, stating that "Coronavirus knows no borders."

The arguments for cross-border cooperation are simple. If Ireland successfully curbs the spread of the virus by closing schools and adopting other similarly stringent measures, it could all be undone if the Northern Irish Government doesn't impose similar rules.

Imagine, for instance, that Ireland successfully stopped the spread of Coronavirus and things began to return to normal.

Now, imagine that Northern Ireland is unsuccessful in curbing the spread because it doesn't limit social interactions.

All it would take in that scenario was one Northern Irish citizen to cross the border and unwittingly transmit Covid-19 to an Irish citizen for the crisis to begin again in earnest.

The Irish Government has adopted policies that are evident throughout most of the world and introduced extremely strong measures in order to delay the spread of Coronavirus.

When it appeared as though the indoor public gathering rule was being broken by people attending pubs, the Government called on all 7,000 pubs in the country to close for two weeks.

The Irish approach is all about delaying the spread of the virus. It accepts that a nationwide spread of the virus is inevitable but believes that the best way to combat this is to delay it as long as possible in order to stockpile the necessary medical equipment and to allow for the potential development of a vaccine.

All pubs & bars in Ireland will close tonight until 29th March. Difficult day for staff & businesses but right thing to do. Huge sacrifice being made by many who work in this sector so please let this be a sign to all about how seriously we must take this #CoronaVirus #COVID19

The British Government is mulling over a far more controversial and much less widely adopted policy.

This is a policy known as herd immunity; the idea that the best way to fight the virus is for as many citizens to contract the virus now and build up antibodies in case of a second wave.

Some Britons contend that if widespread infection is inevitable, then there is no point in potentially irreparably damaging the economy simply to delay the inevitable.

They also argue that the British population will be more resilient if millions contract the virus now and that the majority of the population would be immune if it returned later in the year.

They argue that countries like South Korea and China, who have taken drastic measures and have gone a long way towards stopping the virus, would get a shock if the virus returned in the winter because most of the population has not built an immunity to the virus.

The British approach is highly controversial and drew condemnation from leading medical officials in the UK.

Firstly, it would lead to a huge mortality rate that would not only dwarf the death tolls in China and Italy, but the current global death toll as well.

Tens of thousands of people would die and it would likely lead to vast overcrowding in underfunded NHS facilities. There are currently just 5,000 ventilators in the NHS at present and the British Government forecasts that herd immunity could lead to as many as 40 million infections.

The British Government appears to be trying to mitigate that death toll by shielding elderly and vulnerable citizens for around 12 weeks. The measures, announced on Monday, call on the British public to avoid all non-essential contact with vulnerable people who most at risk from Coronavirus.

As a result, British Prime Minister Boris Johnson has not announced a total lockdown in the UK.

The Conservative Government is yet to officially ban mass gatherings and mirror almost all other European states.

As a result, the city of Manchester held its annual St. Patrick's Day parade on Sunday and the Cheltenham Horse Racing Festival, which had a daily attendance of more than 60,000 people, contentiously went ahead last week.

Pubs in Britain remain open for the meantime and several critics have claimed that the British Government is too lax in tackling the outbreak.

The Cheltenham Festival, for example, may still have ramifications for Ireland. Several thousand Irish people attended the festival last week, which made a mockery of social distancing.

Racegoers were crammed into a packed stadium and it will be another week before it is fully revealed whether the virus was transmitted at the festival.

Ireland's bid to stem the tide of Covid-19 transmissions could be thwarted by the decision to allow events like Cheltenham to take place, although the Irish people who decided to go to the festival deserve a good portion of the blame if that proves to be the case.

China and South Korea's recovery is evidence that the spread of the virus is not as inevitable as some are making out and, even if it is inevitable, it is surely better to stagger that spread to ensure that hospital services are not brought to their knees at any one time.

Furthermore, delaying the spread buys scientists more time to develop a vaccine. After all, what good is herd immunity when a perfectly good vaccine is available?