The spread of the novel virus has wreaked havoc on social gatherings, and St. Patrick's Day parades around the world have fallen victim to the outbreak of Covid-19. 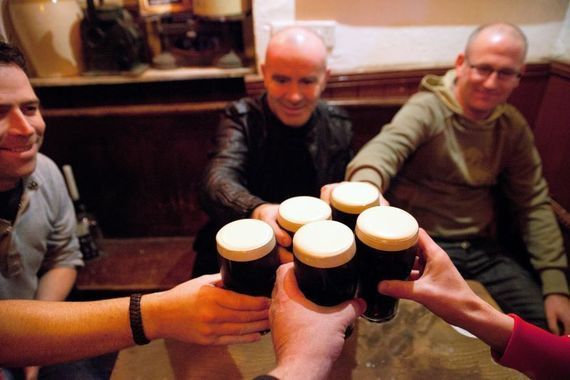 While the coronavirus has affected almost all walks of life in recent weeks, it is set to dramatically impact Irish bars in America who were preparing for their busiest day of the year on St. Patrick's Day.

The spread of the novel virus has wreaked havoc on social gatherings, and St. Patrick's Day parades around the world have fallen victim to the outbreak of Covid-19.

In New York City, where the world's biggest St. Patrick's Day parade was scheduled to take place, the ramifications could be particularly harsh.

The Manhattan parade regularly draws more than two million spectators but was canceled earlier this week in a bid to curb the spread of the virus in New York state, where there have been more than 400 confirmed cases of Covid-19.

Irish bars littered throughout the Big Apple rely on the parade to draw huge crowds to their establishments for their biggest day of the year, but the parade's cancellation has brought uncertainty and anxiety.

One bar owner claimed that St. Patrick's Day revenue was enough to equal three months' worth of normal revenue.

Some bars are preparing for the worst by cutting staff hours and canceling live music events.

Patrick McNamee, who co-founded PMAC Hospitality which owns six bars in New York City, is preparing to lay off staff in a bid to ease the financial strain.

The Mean Fiddler, the crown jewel of PMAC Hospitality, looks like it could be hit particularly hard.

The bar is located just off Time's Square and draws huge crowds of tourists on regular nights. On St. Patrick's Day, The Mean Fiddler attracts long lines of tourists who are in New York for the festivities.

"It's like canceling Christmas on us," McNamee told Eater New York.

Paddy Reilly's, an Irish live-music bar in Manhattan, had originally scheduled live music from 12 noon until 2 a.m. on St. Patrick's Day but has now canceled all performances between noon and 6 p.m.

Jim Gallagher, a manager at Molly's Shebeen, said that St. Patrick's Day will now just be like a "normal day."

The establishment draws as many as 150 people at any one time on St. Patrick's Day, but Gallagher said that he now expects it to be unusually quiet on Ireland's national holiday.

But the loss of revenue has not just been reserved for New York's Irish pubs.

All across America, parades have been scrapped amid fears of a Covid-19 outbreak and it is set to impact Irish bars in all corners of the United States.

In Detroit, the owner of Bobcat Bonnies estimates that the pub will lose out on up to $40,000 in revenue on Tuesday. The pub has already ordered in $15,000 worth of product specifically for St. Patrick's Day.

However, while the loss of business will undoubtedly hit Irish bars with a sucker punch, it will also heavily impact bar staff.

Bartenders and waiting staff are set to miss out on huge amounts that they would usually receive in tips, while many others are facing either temporary or permanent layoffs.