Boston Mayor Marty Walsh - a beacon of light for Democrats

In these dispiriting times under Donald Trump we seek to identify who these future leaders of the party might be. 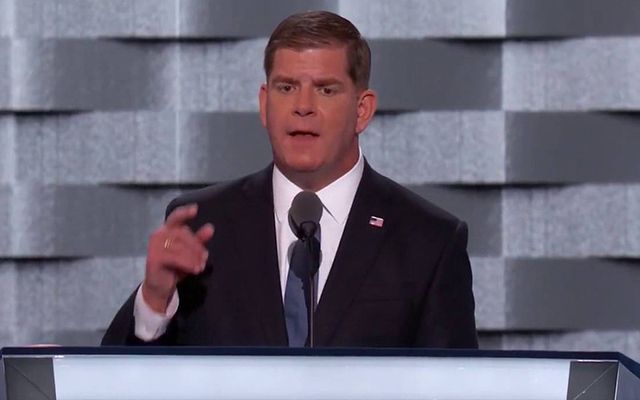 Millions of Americans and many more men and women around the world look on aghast one month into Donald Trump’s presidency. Far from being the “well-oiled machine” he described it as during an absolutely off the wall press conference last week, the Trump administration is manifestly in serious turmoil.

The constant refrain in the campaign was that Donald Trump was temperamentally unsuited to the presidency. It is difficult to argue with that assessment based on the bizarre happenings of his early days in office. Furthermore, his lack of experience in government is showing, and he is very foolish not to surround himself with and listen to more experienced Washington operators.

The tale will truly be told in the coming weeks and months. His “America First” mantra resonated with so many who feel like they have been left behind and/or fear for the direction of the country. If he could put an end to the ongoing sideshow, some of his policy priorities, such as on trade, infrastructure spending and ensuring that young Americans are no longer sent away to fight futile wars, would find favor with a solid majority of voters, including lots of Democrats.

Because the Democratic Party is widely perceived to have abandoned its historic stances on these issues, while simultaneously veering well to the left on other matters, it has been in decline for close to a decade. The party’s representation in both houses of the Congress, and especially in state houses, has suffered.

Meanwhile, observers, not only in the US, but also here in Ireland, are wondering who the new standard bearers will be. Most of their biggest names – Bernie Sanders, Elizabeth Warren, Nancy Pelosi – are not of the next generation.

When seeking to identify who these future leaders of the party might be, it wasn’t long before my thoughts turned back to Boston and its mayor, Marty Walsh.

Mayor Walsh raised his national profile considerably with his recent response to the temporary ban on immigrants from seven countries imposed in chaotic fashion by President Trump. He spoke passionately and eloquently about the ban being offensive to what America has always been. He was able to do so credibly because he is the son of immigrants himself. The mayor has proven popular with left-wing activists in Massachusetts, and his criticism of the president will endear him to progressives nationally. Additionally, he doesn’t carry the baggage that inevitably comes with serving in Washington, DC.

And there is more that makes Mayor Walsh an appealing figure. He is from a working-class background and spent many long, tough days laboring on building sites in the Boston area before studying for a college degree part-time. As an ex-union official, skepticism about the trade deals that leading Democrats supported to the dismay of the rank and file is second nature. A recovered alcoholic, he knows firsthand the plight of those who have fallen victim to addiction, owing in many cases to economic circumstances. He is very real and compelling in a way that most politicians are not.

While his ideology is undeniably left of center, he is probably more comfortable in the stands at a New England Patriots football game than at an art exhibition or swanky cocktail party. There are more than a few conservative Democrats and Independents in Boston neighborhoods like his native Dorchester and South Boston who equally enthusiastically voted for Marty Walsh in 2013 and Donald Trump in 2016.

Mayor Walsh is running for re-election this year and, though he has drawn an opponent, is likely to win handily. The extent of his ambition for any higher office and his capacity to win an election with a broader and deeper pool of highly accomplished candidates are open questions. But when one evaluates the political challenges confronting his party under President Trump, Marty Walsh is one Democrat who ticks a lot of boxes.

Read more: President Trump - It is time to deport your wife for working illegally!