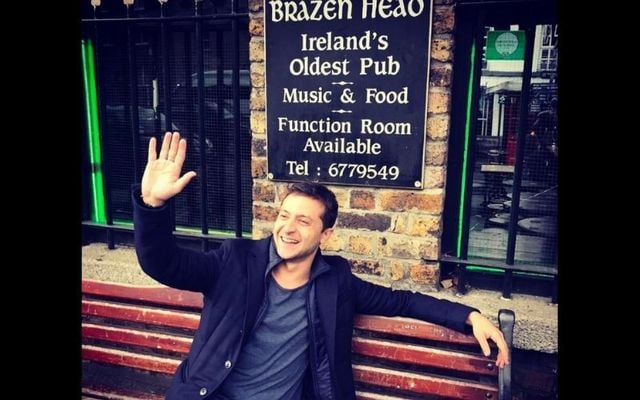 Volodymyr Zelenskyy has become one of the most famous men in the world overnight, a dead sure winner of the Nobel Peace Prize as he has defended global democracy against the Russian bear as the whole world watches.

But in November 2017, Zelenskyy was the most popular comedian in Ukraine, virtually unknown to the rest of the world.

They packed the TLT Theatre in Drogheda, my hometown, some thirty miles north of Dublin for his show on November 4th, 2017.

“He was the number one star in Ukraine,” promoter Nick Levchenko, who brought him to Ireland, told The Irish Times last week. But taking his act overseas to Ireland was still a huge risk.

Before Zelenskyy, the most famous or rather infamous person associated with Drogheda was Oliver Cromwell, who in September 1649 ordered his British troops to storm the town, and more than 6,000 men washed through the south walls, slaughtering all resistance, while a cavalry force lay in wait to the north to prevent any escape.

Catholic priests and friars were killed as combatants, and a group who barricaded themselves in the steeple of St. Peter’s Church was burned alive when Cromwell’s troops set fire to the church.

Even by 1649 standards, it was a war crime, especially as they began slaughtering thousands after they surrendered.

Zelenskyy could not have known of such history on the day he performed in Drogheda, but it sets up an eerie connection between the war crimes in Ireland carried out by Cromwell and Putin’s horrific assault on liberty in this century.

Like the Irish against Cromwell, Zelenskyy is fighting the vicious imperialist in Putin and his evil army.

But on that night in Drogheda in 2017, Zelenskyy was there to do a stand-up routine for his dedicated overseas fans.

Ironically, the show was in Russian, and among the crowd were many ethnic Russians, the kind Putin mistakenly believed would side with him.

Levchenko, a Ukrainian who has been living in Ireland for 22 years, made the connection to Zelenskyy. He made his living bringing over Ukrainian acts to Ireland in the same way many Irish American promoters do for Irish acts.

Zelenskyy drew a crowd of over 1,000. At the time, his TV series "Servant of the People," about a lowly school teacher who decides to run for president and wins, was hugely popular.

Zelenskyy drew a huge crowd in Drogheda who laughed and sang along with him. Little did they know life would imitate art. In 2019, Zelenskyy was elected president of Ukraine.

“The concert sold out very quickly. The response from the Ukrainian community was huge. It was a dream come true that he came to Ireland,” Levchenko told the Irish Times.

“All the people were just happy to be there. They didn’t want to leave after the concert. They hugged each other and sang songs. They felt very proud after the gig.”

Even back then, the promoter recalls Zelenskyy had political ambitions.

“He always promoted Ukraine. He had been talking for a long time about corruption in Ukraine. He wanted to bring peace to Ukraine,” Levchenko said.

Zelenskyy and his wife Olena spent three more days in Ireland. They visited the Guinness Storehouse and Phoenix Park and a few pubs. He seemed very much at home and met many delighted Ukrainian expatriates.

They drove south and west to the Cliffs of Moher. “Ireland seemed to him like a magical place with all different houses and different colors. He liked to see people with smiling faces. He was very happy to be in Ireland. I am not just saying it but he was very keen to come to Ireland,” Levchenko said.

Nowadays, Zelenskyy gets standing ovations from world parliaments, including Ireland’s. The comedian has become an international statesman, the hope and light of democracy everywhere, and a long way from the stand-up who came to Drogheda in 2017. He is an inspired leader for a terrible time.

Stop the genocide in Ukraine, send in NATO, President Biden

The greatest Irish emigrant poem by the late Eavan Boland