Taoiseach Micheál Martin does not believe Ireland was being "singled out" by President Volodymyr Zelenskyy's address to the European Council on Thursday night. 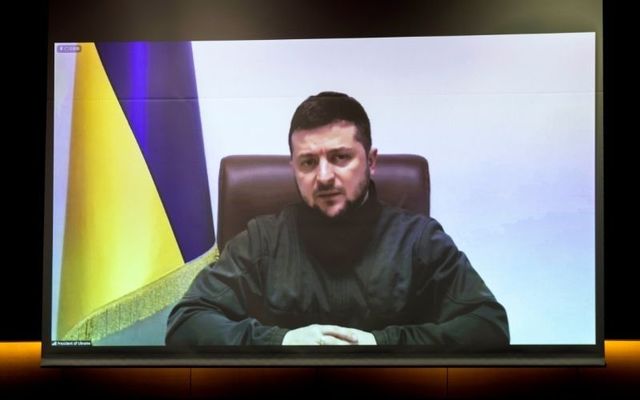 Ukrainian President Volodymyr Zelenskyy, speaking via video feed from Kyiv, addressed the European Council on Thursday night and thanked each member state for standing with Ukraine during the conflict.

According to an official translation of his address, Zelenskyy said in part: "Italy - thank you for your support! Spain - we’ll find common ground. Belgium - we will find arguments. Austria, together with Ukrainians, it is an opportunity for you. I'm sure of it.

Addressed the European Council and the nations of Europe, and stressed that Ukraine had not gone to a foreign land. Never dreamed of any war. Shoots down missiles. Urges strangers to lay down their arms and return home. For the sake of life. Ukraine has united for peace. And unites the world for the sake of peace.

Ireland moved early to waive visa requirements for Ukrainian refugees entering Ireland and has taken in more than 10,000 refugees since the beginning of the Russian invasion on February 24.

Tánaiste Leo Varadkar recently told the Dáil that that figure may rise to 40,000 by the end of April.

Ireland was also the first western European country to join an informal grouping of eastern EU member states known as Friends of Ukraine, which is calling for Ukraine to be formally named an EU membership candidate.

However, Ireland did not send military aid to Ukraine during the conflict, choosing to opt-out of a €1 billion EU fund for military aid for Ukraine.

Instead, the Irish Government decided to send non-lethal aid to Ukraine, including €20 million in humanitarian assistance.

Speaking with reporters in Brussels on the second day of high-level European Commission meetings regarding the situation in Ukraine, Taoiseach Micheál Martin was asked if Ireland had been "singled out" by Zelenskyy.

"That wouldn’t have been my read of it," the Taoiseach said. "He was actually talking in terms of the European perspective ... I wouldn’t have taken the same slant that some may be taking from it."

He added: "I spoke to him last week and he was very strongly in praise of the Irish contribution both from a humanitarian perspective and also in terms of our clear support for Ukraine’s application to join the European Union and he thanked me personally for my own personal commitment to that.

"So I’m not going to surmise in terms of whatever particular take you would take from the use of the word almost or practically and I wouldn’t overstate that to be frank."

When asked if Zelenskyy's comments could be interpreted as meaning that he believed Ireland's support to be less intense than other countries, Martin said: "I think that’s reading too much into it if I'm honest."

"Obviously we're a military neutral country, but we explained that we facilitated the EU peace facility, which has been of enormous support to the Ukrainian people.

"So I wouldn't overstate it, quite frankly."

Elsewhere in his address to the European Commission on Thursday night, Zelenskyy spoke of his standing desire for Ukraine to become a member of the European Union, which Ireland strongly supports.

"And now you and I are preparing Ukraine's membership in the European Union. Finally," Zelenskyy said.

"Here I ask you - do not be late. Please. Because during this month you have compared these worlds, and you see everything. You saw who is worth what. And you saw that Ukraine should be in the EU in the near future.

"At least you have everything for that. And we have this chance."