More than 40 Irish landmarks are lighting up in the colors of Ukraine's flag as a show of solidarity this St. Patrick's Day. 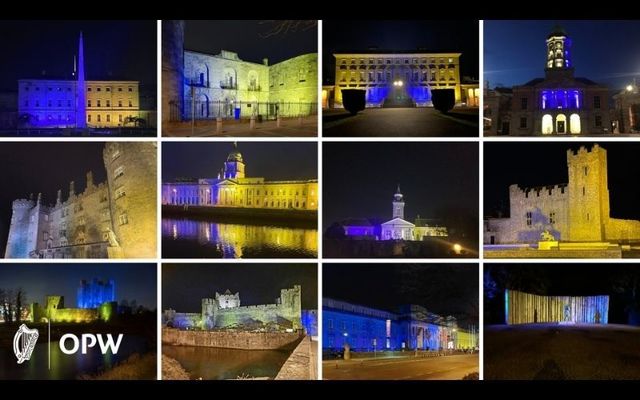 Irish landmarks light up blue and yellow for Ukraine ahead of St. Patrick's Day. Office of Public Works @opwireland, Twitter

Irish landmarks have been lit up in blue and yellow, the colors of the Ukrainian flag, ahead of St. Patrick’s Day.

"In Ireland and abroad, we take pride in the wearing and displaying of the green on St Patrick’s Day," Patrick O’Donovan, Ireland's Minister for the Office of Public Works and Flood Relief, said. "The colour is an intrinsic part of our pride in our roots and the joint celebration of Irishness on our national holiday.

"Over many years, the Office of Public Works has set the mood for this important day by symbolically ‘greening’ our most iconic heritage sites, government buildings and national cultural institutions.

"This year is different, however, and even as we look forward to marking St Patrick’s Day with our friends and loved ones, we think of the people of Ukraine whose lives, safety, and sovereignty are at risk.

"For them and for the eyes of the world, we send a message of solidarity by illuminating 41 Irish landmarks across the country in the colours of Ukraine tonight and over the St Patrick’s Day weekend to underline that the people of Ireland stand with Ukraine."

Traditionally, #OPW has set the mood for #StPatricksDay by symbolically ‘greening’ our most iconic Irish landmarks. This year we send a message of solidarity by illuminating 41 sites in the colours of Ukraine.
Read Minister @podonovan's statement here: https://t.co/gcC0RK5TH2 pic.twitter.com/REQxGgR4Pb

The Kilmainham Gaol Museum in Dublin is among the more than 40 Irish landmarks illuminating in solidarity with Ukraine:

Kilmainham Gaol is among 41 lrish landmarks which are being lit up in blue and yellow over the St. Patrick's Day weekend in solidarity with the people of Ukraine. We are also flying the Ukranian flag alongside the Irish tricolour outside the Courthouse building @opwireland pic.twitter.com/OKtiEdC2KF

Last week, Tourism Ireland confirmed it would not be promoting its"Global Greening" initiative, where landmarks around the world are illuminated in green for St. Patrick's Day, as a mark of respect for the situation in Ukraine.

Prior to Tourism Ireland's announcement, the matter was raised in the Dáil.

During Leaders Questions on March 8, Deputy Seán Canney suggested to Taoiseach Micheál Martin that "as a mark of solidarity with Ukraine, we consider for next week raising the Ukrainian flag with the Irish flag at every embassy and, where we are greening our Irish buildings across the globe, that we also include the colours of Ukraine as a mark of respect and solidarity with these people."

The Taoiseach responded in part: "As a result of the appalling situation and war in Ukraine, we have evolved our tone and theme of St. Patrick’s Day next week from an overt focus on Ireland to a broader focus on the fact Ireland is an active, engaged and fully committed member of the international community that stands by democracy, the rule of law and human rights.

"We will use St. Patrick's Day and that week basically to highlight our solidarity with Ukraine and the values for which the Ukrainian people are standing. That is a key issue."

He added: “The Global Greening programme in partnership with Tourism Ireland has been an enormous success over the years.

“We are re-examining that for St. Patrick's Day in terms of how we can interweave it with a Ukrainian theme as well.”

The Journal reported last week that the Taoiseach had written to all Irish embassies asking that embassies, monuments, and other sites typically lit up green for St. Patrick’s Day should instead be lit up in yellow and blue, the colors of the Ukrainian flag.

Ireland's Department of Foreign Affairs said in a statement in early February that more than 600 sites around the world were set to take part in this year's Global Greening.