Tourism Ireland is not promoting its annual Global Greening this year as leaders in Ireland adjust their approach to St. Patrick's Day in light of the situation in Ukraine. 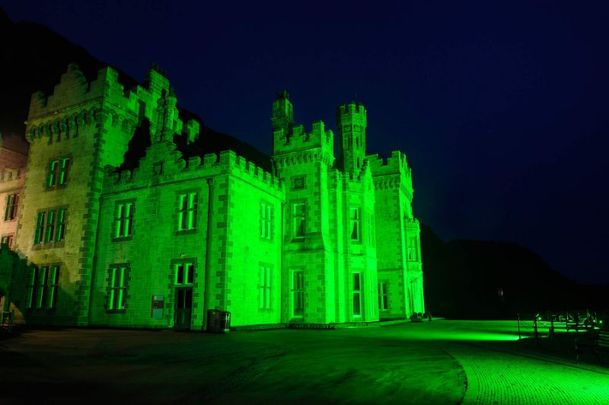 The annual Global Greening, where landmarks around the world are illuminated green for St. Patrick’s Day, will not go ahead this year, Tourism Ireland has confirmed.

“​2022 is a very different year and as a mark of respect to the situation in Ukraine, Tourism Ireland has taken the decision not to promote the Global Greening initiative for St Patrick’s Day,” the Irish tourism board confirmed to IrishCentral on Thursday.

The statement added: “​Normal promotional activity around St Patrick’s Day will continue as part of the organisation’s overall marketing programme to restart overseas tourism this year, for an industry that has faced extremely difficult circumstances since the Covid-19 pandemic started in 2020. ​

“​Tourism Ireland looks forward to rolling out its biggest ever Global Greening promotional programme again in what we hope will be a more peaceful world in 2023. We would like to thank the Department of Foreign Affairs and Diaspora groups around the globe, who have been valued partners in this project.”

Tourism Ireland’s announcement that it will not be promoting the Global Greening this year comes two days after the matter was raised in the Dáil.

During Leaders Questions on Tuesday, Deputy Seán Canney suggested to Taoiseach Micheál Martin that "as a mark of solidarity with Ukraine, we consider for next week raising the Ukrainian flag with the Irish flag at every embassy and, where we are greening our Irish buildings across the globe, that we also include the colours of Ukraine as a mark of respect and solidarity with these people."

The Taoiseach responded in part: "As a result of the appalling situation and war in Ukraine, we have evolved our tone and theme of St. Patrick’s Day next week from an overt focus on Ireland to a broader focus on the fact Ireland is an active, engaged and fully committed member of the international community that stands by democracy, the rule of law and human rights.

"We will use St. Patrick's Day and that week basically to highlight our solidarity with Ukraine and the values for which the Ukrainian people are standing. That is a key issue."

He added: “The Global Greening programme in partnership with Tourism Ireland has been an enormous success over the years.

“We are re-examining that for St. Patrick's Day in terms of how we can interweave it with a Ukrainian theme as well.”

The Journal reported earlier on Thursday that Taoiseach Micheál Martin has written to all Irish embassies asking that embassies, monuments, and other sites typically lit up green for St. Patrick’s Day should instead be lit up in yellow and blue, the colors of the Ukrainian flag.

Ireland's Department of Foreign Affairs said in a statement in early February that more than 600 sites around the world were set to take part in this year's Global Greening.

Tourism Ireland’s Global Greening started in 2010 when the Sydney Opera House was illuminated in green to mark the 200th anniversary of the first reception held in 1810 for Irish ex-pats by Governor Lachlan Macquarie in New South Wales.