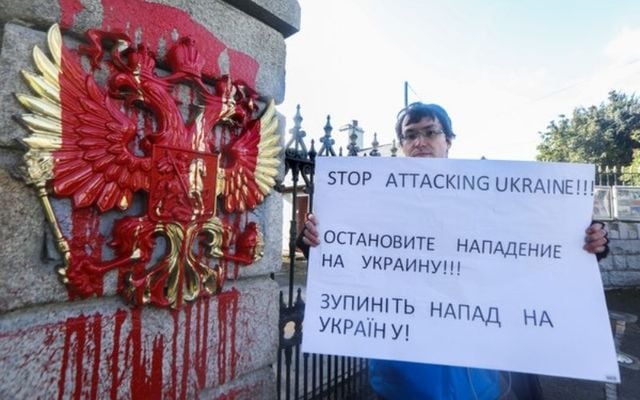 February 24, 2022: Mykhailo Makarov from Ukraine, living in Dublin, protesting outside the Russian Embassy in Dublin. Visible is red paint which was thrown across the coat of arms of the Russian Federation on the gate outside. RollingNews.ie

Dublin's Orwell Road, where the Russian Embassy is located, could soon be changed to "Independent Ukraine Road."

All 20 councilors at a recent Dundrum area meeting of the Dún Laoghaire Rathdown County Council voted unanimously voted in favor of changing the name of Orwell Road but agreed that local residents should be consulted on the move first.

Labour Party Councilor Peter O'Brien, who proposed the motion to the sub-committee, told the Journal that the move would show solidarity with the people of Ukraine.

"It’s just a small sign of solidarity to the people of Ukraine, just to say the international committee are with them, the Irish community supports them, too," O'Brien told the Journal.

O'Brien added that this was the first time that councilors had proposed the renaming of a road, stating that local residents usually approach the council to propose a name change.

He said residents on Orwell Road will most likely have the final say on the decision via plebiscite.

Several protests have taken place outside the Russian Embassy on Orwell Road since Russia launched a full-scale invasion of Ukraine on February 24.

Protesters have thrown red paint at the Embassy gates and daubed graffiti on the Embassy walls, including captions such as "blood on your hands" and "Nazis".

Others have removed plaques from the Embassy walls, while 49-year-old Leitrim native Desmond Wisley was charged with dangerous driving and criminal damage after a large lorry reversed through the Embassy gates, knocking them to the ground.

The Russian Government has summoned Brian McElduff, Ireland's Ambassador in Moscow, over the ramming of the Embassy gates, seeking an official apology and the cost of repairs.