Ireland is expected to take about 2 percent of the millions of Ukrainians expected to flee their homeland amidst the Russian invasion. 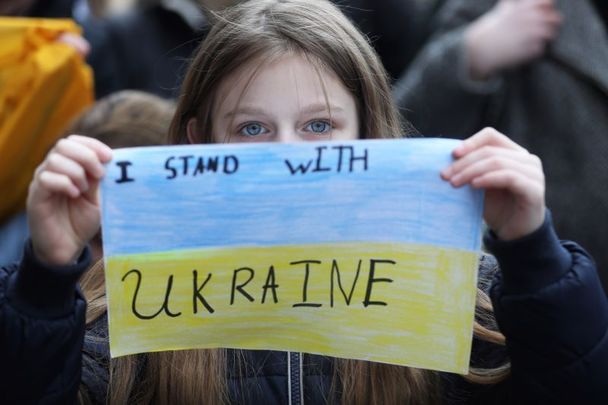 February 26, 2022: People at the GPO in Dublin protesting the Russian invasion of Ukraine. A 9-year-old Ukrainian girl holds a sign saying "I Stand with Ukraine." RollingNews.ie

Ireland is geared to accept up to 100,000 refugees fleeing the war in Ukraine. That’s a figure based on the 1.5 million people who fled by Sunday, 10 days into the Russian invasion of their country.

Government ministers privately believe the 100,000 expected into Ireland could be much exceeded as 4.5 million or 5 million may cross the border from Ukraine in the coming weeks as the Russians continue their onslaught.

Speaking following meetings with the World Health Organization in Copenhagen, Minister of State Anne Rabbitte said such an exodus would represent 10 percent of the Ukrainian population.

She confirmed Ireland would be expected to take two percent of those, if they were willing to come. Already, early this week, nearly 2,000 had arrived from Ukraine, staying mainly with families who made their homes available across Ireland.

Officials are working on plans to use army facilities as well as hotels to cater for the influx, which is expected to gather pace in the coming weeks, the Irish Times reports.

Ireland has already eased passage for the refugees by ending as from last Saturday night the need for location documents or anti-Covid vaccination papers at airports. They were the last remaining Covid-19 emergency powers in effect in Ireland.

In addition, Health Minister Stephen Donnelly said all Ukrainian refugees will be provided with medical cards and given full access to healthcare facilities and Ireland’s Covid-19 vaccination program, as well as mental health supports.

Ireland is totting up amazing amounts of Euro in money, food, clothing, and medical supplies to help the Ukraine victims of Vladimir Putin’s invasion. It’s believed the total could add up to many hundreds of millions of Euro as every town and village is rallying to the cause.

The government has already donated €10 million for humanitarian aid and Taoiseach Micheal Martin said during an appearance on The Late Late Show on Friday another €10 million will soon be on its way.

He drew a huge round of applause from the studio audience, many of them Ukrainians living in Ireland and family members who fled the terror at home to join them, when he described Putin as “dangerous” and “evil” and said he didn’t think much of him.

Late Late viewers contributed €3 million to an appeal broadcast by presenter Ryan Tubridy for support for the Red Cross effort in Ukraine. Secretary-General of the Irish Red Cross Liam O’Dwyer said when that was added to donations over the previous week Irish supporters had contributed an amazing €9 million to the Red Cross.

With hundreds of smaller organizations loading up vans and trucks for the refugees on the Poland and other borders with Ukraine, Ireland’s contribution to the humanitarian cause amounts to many hundreds of millions of Euro.

Donal Greene, from Dundalk, left Ireland on Sunday night with a van full of baby and medical supplies collected at his local soccer club for a location on the Slovakia/Ukraine border.

He said, “When I arrived at the football ground to collect local donations I couldn’t believe my eyes. The whole area under the main stand was absolutely full. I could have filled 20 jeeps. People are brilliant.”

One of the first Irish teams on the Poland/Ukraine border was led by businessman Alan Gale from Lucan, Co, Dublin. Their Ukrainefoodtruck.com venture was first highlighted by the Irish Voice and IrishCentral last week. Since then it raised nearly €40,000 by Monday evening.

The money was used for food and medical aid and washing machines and driers in a border school turned into a refugee complex.

By Tuesday of this week, Gale’s team was enlarged with more personnel who drove across Europe from Dublin with a jeep carrying vital sanitizing and spraying equipment for buses transporting refugees onwards from the border.