Cancer patient Leonid Shapoval, 5, is being assessed in Co Cork after fleeing Ukraine with his family at the advice of his medical team. 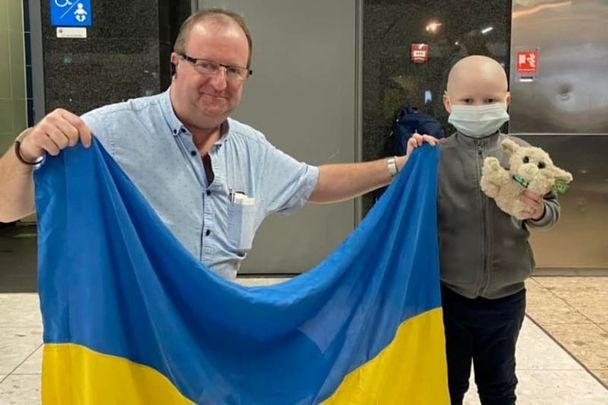 A GoFundMe for Leonid Shapoval, a 5-year-old boy with leukemia who fled with his family from Ukraine to Ireland over the weekend, has so far raised more than €56k.

Leonid, who was diagnosed with leukemia less than a year ago, has been undergoing chemotherapy treatment and was set to receive a bone marrow transplant in Kyiv, the capital of Ukraine, on March 10.

Last week, however, when Leonid and his parents arrived for a check-in with his medical team, they were told there was nothing more that could be done in light of the impending Russian invasion. The family was given Leonid's medical records and told to flee the country.

As the family prepared to leave, Leonid's mother Yana reached out to her aunt Victoria Waldren who has been living in Co Cork since 2001. Waldren contacted local Independent TD Michael Collins for assistance, who liaised with Ireland's Department of Foreign Affairs to help ensure passage for the family.

Around the same time as Leonid and his family began to flee, Ireland announced that it would be waiving visa restrictions for Ukrainians.

Leonid, his parents Yana and Serghyi, and Yana’s mother Svitlana Surzhyk headed west to the Polish border, leaving most of their things behind.

"It took them 30 hours to drive there," Waldren told RTÉ. "And when they got there, there was 20 km of a queue of cars.

“But luckily the police were very kind to them once they found out the condition Leonid was in. They put on the sirens and they took them 20 kilometers to skip the queue."

The family stayed overnight at the border before heading to Warsaw. From there, they flew to Zurich, and then on to Dublin where they arrived on Monday night. The family, exhausted and only with one suitcase, was met in Dublin by TD Collins.

FROM UKRAINE TO WEST CORK -Five year old Leonid fled with his family over the weekend to finally land in Dublin Ireland,...

The family is now in Ballydehob in West Cork staying with Waldren, who told Cork's C103 on Tuesday: “It’s absolutely devastating ... It is a matter of death and life."

She added: “Where the bone marrow transplants are done for the kids, it was bombed, bombed by Russia."

Waldren said Leonid's treatment needs to begin as quickly as possible as he's not in remission.

On Wednesday, the five-year-old underwent hours' worth of tests in Cork, but TD Collins said issues remain surrounding the translation of Leonid's medical records as well as who his bone marrow donor will be.

“This might not be a possibility, but there was a donor in Ukraine who was identified as a suitable donor for Leonid," Collins told Echo Live. “We’re trying to see can we get the name of that donor and if it’s a possibility of getting that donor to Ireland."

A GoFundMe launched by Waldren's son has so far raised more than €56k in less than two days, far surpassing its €1,000 goal.  Any extra funds will be donated to the Irish Cancer Society.

"I hope he gets cured and lives a very happy, long life - that is what I want for him, because he is such a wonderful little boy,” Waldren said.

Leonid's mother, who was keen to show her gratitude to Collins and the Department of Foreign Affairs, told RTÉ News: "Leonid is very kind and very active. He's a very lucky boy.

"I hope he will be happy and we will be free."

You can watch the RTÉ News report on Leonid Shapoval and his family's journey from Ukraine to Ireland here: